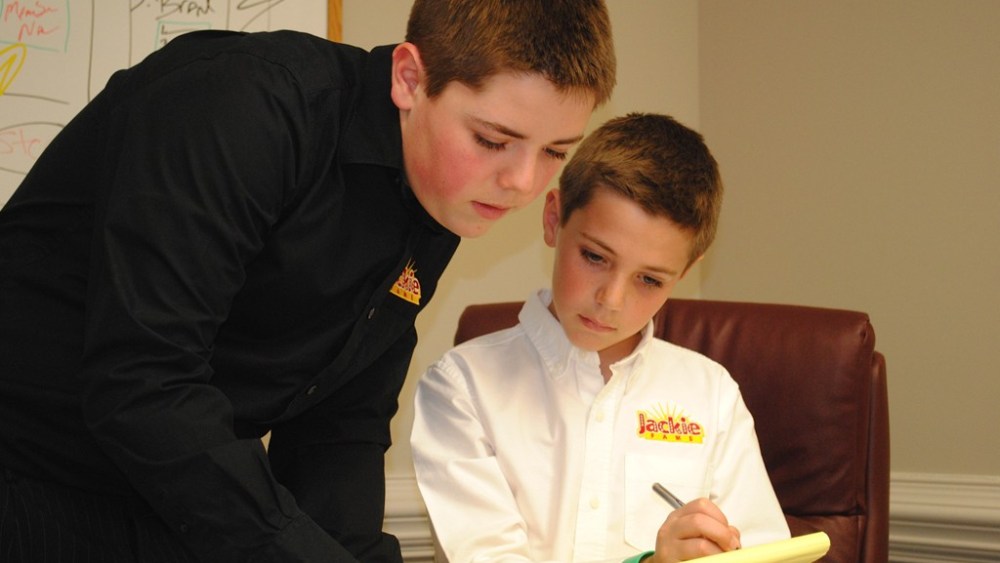 LAS VEGAS — The most compelling new line launched at the ECRM meeting, held here at the Red Rock Resort last week, was Jackie Fame. Buyers gathered in the hotel hallways to discuss what they called a riveting presentation by the “salesmen,” who were 11 and 14 years old.

At a time when most tweens and teens are spending hours engaged in social networking, these two brothers — Zachary and Joshua Swauger — not only created their own site (which has attracted more than a million hits) but also extended it into a line of personal care and nail polishes.

“Our dad wouldn’t let us have a Facebook [account] because of privacy issues, but he told us we could create anything we wanted,” said Zachary Swauger.

What retailers hope they are building is a brand that will speak to tween and teen girls through an assortment of natural bath and body products produced in Australia. There’s also a full range of nail colors, and the brothers are already working on a male line. “I’m going to try the line just because they were so impressive,” said one of the drugstore chain buyers, who attended the show.

The meeting, which included a prestige component, seems to indicate that the ECRM concept is still going strong more than a year after the death of its founder, Charles C. Bowlus.

Among the premium vendors on hand were Olivia Care, Crabtree & Evelyn and Manic Panic. Retailers sampling the ECRM format from specialty companies included SkyMall, Amazon.com, TJX Europe and Beauty Bar. Suppliers on the mass side ran the gamut from Coty Inc., Maybelline Inc., L’Oréal USA and Revlon Inc. to up-and-comers such as Chrislie Formulations, EOS and Mincer Labs (a firm from Poland). The retailer lineup ranged from Walgreen Co. and CVS Corp. to Dakota Drug Inc., Publishers Clearing House and 99 Cent Only Stores.

Jackie Fame’s young duo hope to attract teens, but most of the suppliers zeroed in on aging women. Skin care manufacturers are getting serious about the mass market at a time when consumers aren’t afraid to spend big bucks at mass doors. Other trends emerging over the three days were an invasion of foreign firms looking for fertile growth in the U.S., a renaissance of the fragrance business and manufacturers aiming to leverage a strong brand name in one category into other product lines.

Revved-up skin-care launches were shown by companies such as Omojo Health, Chrislie Formulations, Mincer, Upsher-Smith Laboratories, Freeman Beauty and Ermis Labs. Omojo is trying to coax Americans to try the beauty-from-within concept again with the brand’s combination vitamins and serum packs. “We are simplifying and educating the consumer,” said Corey Zembruski, managing director of Omojo.

Going beyond BB creams, the new company Chrislie Formulations showed a whitening product called Measurable Difference. Meanwhile, ingredient stories were pitched including Freeman’s efforts behind Eclos (which it acquired earlier this year), a plant stem-cell technology or the use of sea whip coral extract from Ermis.

Natural continues to evolve at mass, with more and more companies validating claims with seals of approval such as that from the Natural Products Association.

Natural product sales, according to Steve Wilt, national accounts manager of The Hain Celestial Group Inc., are running 17 percent ahead of the general market and more chains, including Target Corp., Walgreens and Wegmans, are building natural sets.

A major total initiative from Belcam Inc. called Sow Good was being previewed at ECRM. According to Paul Bellm, vice president of sales for Belcam, the line encompasses categories from fragrance to even implements positioned with a natural and good-for-the-environment message. The line carries the NPA seal.

In bath, the story was revitalizing known brands with a new twist. Companies such as Vitabath, formerly a specialty brand reborn for mass, have new formulas benchmarked against premium brands like L’Occitane. “Retailers are really looking to build their specialty bath departments,” said Richard Neill, president of Vitabath. To get more users, especially younger customers who might not know the brand as well, Vitabath is offering a sampler pack priced at $9.99.

At Advanced Beauty Systems, executives reviewed the success of Bodycology and talked about the growing interest in “after-shower” products. The company also talked about amped up efforts for the Dr. Teal’s brand.

Brands known for one category made it clear they want to leverage their strengths into other areas. Carmex, for example, a name synonymous with lip care, has been getting good consumer response for its Carmex lotions and hand cream. EOS Products, known for its cool lip package, is taking its hip look into the skin and shave category. “These categories are so big that even a small share is big,” said Scott Pakula, executive vice president of EOS.

The once-sleepy mass-market fragrance industry is getting a jolt from a rebirth of the Dana brand, a new Jordin Sparks scent, expansion of Instyle and a host of exclusive scents that offer greater margin for mass merchants. Buyers admitted that efforts of prestige fragrance houses to tighten the pipeline of scents into mass has worked with some very hot fragrances hard to get. That’s helped Instyle nab greater sales and distribution with its fragrance alternatives. According to company president Robert Luby, Instyle is the number-one seller at Walgreens in fragrances based on ACNielsen data. He pledges to bring out the “right” fragrances. “We follow trends, not fads,” he said.

There are also more companies, such as SFI Specialty Fragrances, offering exclusive scents with high gross margins to offset the distribution of prestige fragrances.

Giving the mass market celebrity power of its own was Preferred Fragrance, which, on the heels of success with the debut Jordin Sparks fragrance Because of You, is launching a second scent called Jordin Sparks Ambition. The timing dovetails with major exposure of Sparks for her role in the film “Sparkle” (also starring the late Whitney Houston).

But perhaps one of the most interesting stories, buyers said, is the continued rebirth of Dana Classic Fragrances. Its classic fragrances have been garnering more support over the last year with consumers looking for pleasant memories by wearing Chantilly, Baby Soft, Tabu, British Sterling or English Leather. With those sales growing, Dana is leveraging those names with offshoot fragrances under the brand umbrella. “We are continuing to innovate and take our great names and upgrade them,” said Jamie Conner, Dana president. He said the next step is to introduce updated and upgraded scents that are offshoots of the classic names.

There was an international flair with firms from around the world, including Poland’s Mincer, which showed a unique dispenser for skin care, Mexico’s Republic Nail and Great Britain’s Original Editions and its whimsical Katy Perry false eyelashes.

• Mineral Fusion Natural Brands, available in chains such as Whole Foods, has tapped Emmanuelle Chriqui as a spokeswoman for its fall campaigns.

• Neoteric is offering a collection of its “skin heroes” in the Montague Jeunesse collection of sachets, and is launching Face Spas, fabric masks infused with skin care products that are used on the face for five minutes.

• Love & Toast will have a presentation in Sunflower, the natural chain that was getting much buzz at the show.