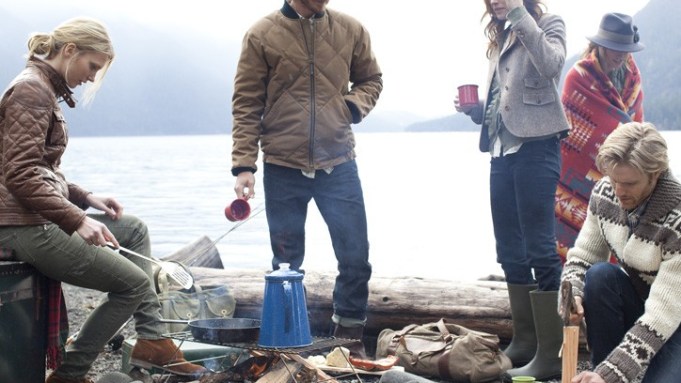 Eddie Bauer invented the down-filled jacket, outfitted the first American ascent of Mount Everest and even patented the badminton shuttlecock — and the 91-year-old company that bears his name wants consumers to know that.

“Eddie Bauer has arguably one of the richest, if not the richest, heritage stories to be told today,” said Neil Fiske, chief executive officer of the Bellevue, Wash.-based retailer that is undergoing yet another evolution of its stores, product lines and branding. The goal is to mine the company’s heritage and archives to add a shimmer of romance and luster to the brand — which has undergone two bankruptcies since 2003 — while at the same time update and modernize stores and merchandise.

“Our strategy is anchored in the past but creating a modern interpretation of that past,” explained Fiske.

Key to that effort, since the company was acquired by Golden Gate Capital in July 2009, is the addition of 150 employees at the company’s corporate headquarters, including a doubling of the design team and the recruitment of Nathan Laffin, previously senior vice president of global design at Dockers, as senior vice president and creative director at Eddie Bauer. The company has added premium lines, focused on rebuilding its heritage as a pioneer in the outdoor performance arena and built stores in a new retail format.

“We have both an amazing performance heritage as well as a strong sportswear sensibility,” said Laffin, who will present the newest incarnation of Eddie Bauer product in a presentation at Milk Studios in New York on April 20. “We have huge retail, catalogue and online businesses. Our delivery mechanism is in place and we already have an engaged consumer — now it’s about tightening our focus.”

Eddie Bauer’s merchandising strategy is centered on two distinct platforms: Expedition versus field and stream. The former is apparel and gear related to cold-weather mountaineering and the latter is related to hunting, shooting, fishing and other outdoor recreational sports.

The company launched a high-performance label called First Ascent in May 2009, to drive home its stake in the expedition category. “It’s true mountaineering apparel and gear made for the harshest conditions. Before there was The North Face and Patagonia, we were the expedition outfitters to American’s greatest climbers,” said Fiske, taking a jab at two brands that have stolen much of Eddie Bauer’s appeal in the hearts of consumers in recent years.

A ski line, called First Descent, launched this past holiday, and an authentic hunting line will make its debut for fall 2012, said Laffin.

Also adding to Eddie Bauer’s premium offerings is a multiyear collaboration deal with British designer Nigel Cabourn, who has created a line of outerwear that retails from $900 to $1,500 and will be available in September at select Eddie Bauer stores as well as wholesale accounts like Barneys New York and Opening Ceremony.

Another collaboration with Pendelton will hit stores this holiday season and the company is in talks with Filson for a potential partnership.

Eddie Bauer’s previous owner, Spiegel, had discontinued the brand’s focus on serious expedition gear and apparel. “They were really focused on growing the women’s business and everyday, casual clothes,” explained Fiske. “They really lost sight of our outdoor heritage. But there’s a real merging of technical outerwear and sportswear in the marketplace today, and we are right in the middle of that trend now.”

Eddie Bauer’s sales skew 60 percent in women’s and 40 percent in men’s. The company forecasts those numbers will become 50-50 as the men’s business grows faster than the women’s.

Eddie Bauer rings up $2 billion in sales a year at retail, including $800 million in licensed product and $200 million in international markets. Full-price retail is Eddie Bauer’s largest business, followed by direct (catalogue and online) and then outlet stores.

Eddie Bauer operates 352 stores, encompassing 312 full-price and outlet stores in the U.S., 37 stores in Canada and three warehouse units (two in the U.S., one in Canada). The store count is down slightly from the 371 stores in operation when Golden Gate acquired the company in 2009 out of bankruptcy for $286 million in cash.

In addition, there are 54 stores in Japan run as part of a long-standing venture with Otto Japan Inc.

The format features the field and stream merchandise in the front of stores and expedition product in the rear. The former accounts for about two-thirds of sales and the latter for one-third. To drive home Eddie Bauer’s heritage and performance credentials, 65-inch plasma screens show videos of the most recent Eddie Bauer expeditions from around the world.

“We are just in the beginning stages of rolling out the new format over the next three to five years,” said Fiske.

First Ascent shop-in-shops have been installed in about 180 stores. The company has also invested in a new point-of-sale computer system to be installed this fall that will improve inventory management, customer data maintenance and the customer experience at checkout.

“We don’t have a retail presence in New York and we need a flagship store and a small, neighborhood Bleecker Street-type store, to help people understand some of the cool stuff that we are doing,” added Laffin.

The company has tapped Carlos Quirarte and Matt Kliegman, proprietors of hip NoHo restaurant The Smile, to consult on potential New York stores, as well as the overhaul of Eddie Bauer product and branding.

Online sales were up more than 20 percent in the fourth quarter and up in the high teens for the full year. “You will see a continued evolution of the brand face on the Web and a series of staged improvements,” said Fiske. “The site will look updated and there will be incremental improvements in performance and functionality.”

In direct, the company sends out 70 million to 80 million catalogues a year. “We see the catalogues motivating consumers to go shop on the Web. So while our traditional phone-order business is getting smaller, Web transactions are getting bigger,” pointed out Fiske. “We will continue to refine who gets a catalogue and the catalogues themselves are increasingly targeted, with more specialization, such as First Ascent, home, men’s, women’s, holiday and gift books.”

At a Peter J. Solomon Co. conference on Wednesday, Kenneth Berliner, president and head of the mergers and acquisitions group at the investment banking advisory firm, said that Eddie Bauer, a client, has been doing well recently due to the changes implemented under Golden Gate. He said to expect “something big in the next three-to-five years that will have attractive valuations,” suggesting either an initial public offering or sale of the company.

Following Golden Gate Capital’s sale of J. Jill Group in March, speculation abounded that it might sell off Eddie Bauer imminently, as well. However, Fiske brushed aside those rumors.

“Golden Gate is investing aggressively in Eddie Bauer and believes it has huge potential,” said Fiske. “That investment is across a number of different areas and, if you look at that pattern, I think you’ll see they have a lot of excitement about the momentum we are creating and the potential that lies ahead.”