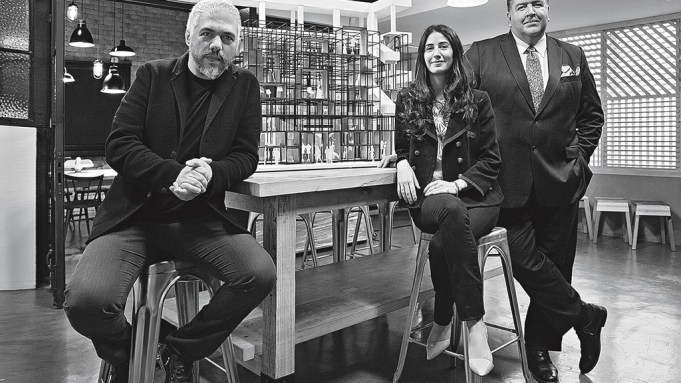 For its 125th anniversary celebration, El Palacio de Hierro has a different spin on retailing — store as museum.

To bring to life its extensive history of fashion, furniture, tabletop, appliances and designers, the company is installing a 40-ton iron structure right in the main hall of its downtown Centro store. Héctor Esrawe, of the creative agency bearing his name, is the architect who designed the structure. The exhibition, which opens Oct. 9, reinvents the pop-up format in a sophisticated format and is a most appropriate setting, considering Centro is the original venue of the store chain.

“We are showing old products in a modern way,” said Rodrigo Flores, fashion home director for El Palacio and the project leader for the exhibition, which will feature hundreds of items. “We figured out that there would be no better way to stage an exhibition like this. It’s an important anniversary. We wanted to take it to another level.”

Centro Palacio’s darkest moment, the great fire of 1914 caused by a short circuit in a window, will be commemorated with a window display. The store, inspired by the Art Deco and Art Nouveau architectural styles of the great department stores in Europe such as Le Bon Marché, Harrods and Galeries Lafayette, was gloriously rebuilt and reopened in 1921.

Another 18 windows will be adorned with products from the distant and more recent past, each with a story of its own, while the main attraction inside will occupy more than 4,800 square feet over three levels housing a total of 36 vignettes for fashion, furniture, memorabilia and historic pieces. It’s being constructed like a 3-D grid, enabling visitors to walk inside and view the different floors from different perspectives. About half of the store’s current merchandise is being temporarily swept aside to make room for the exhibition. Guides on each floor will help visitors navigate through and explain that the iron structure is symbolic, evoking the original “Iron Palace.”

Sitting beside a scale model of the exhibition, Flores detailed many of the special products gathered for the event — early-20th-century kitchen gadgets; photos from designer and celebrity appearances; a silver centerpiece from Maximilian; 100 years of hats; 125 years of plates; vintage postcards; advertisements from the retailers of European capitals that inspired the founders of El Palacio de Hierro; antiquated electronics of all kinds, like Gramophones and one of Mexico’s first televisions from the Fifties, and a praxinoscope, one of those old devices emitting a rapid succession of images for the illusion of motion, projecting men and women dancing in ballgowns and black tie.

There will also be a section devoted to the Salón Internacional, a format that was once inside El Palacio de Hierro to spotlight haute couture from international designers. There will even be a small “mourning” catalogue on display, providing head-to-toe looks for the entire family, from long black shawls and black umbrellas to corsets and veils adorned with crepe.

In addition, Flores is tapping his own collection of 200 dresses and gowns from different decades, putting several on display — notably a Jacques Doucet couture gown from the early 20th century. The French designer was known for flamboyant, flimsy dresses with pastel colors. Of the exhibition overall, “We will show pieces from every decade. This exhibition is quite extensive,” Flores said.