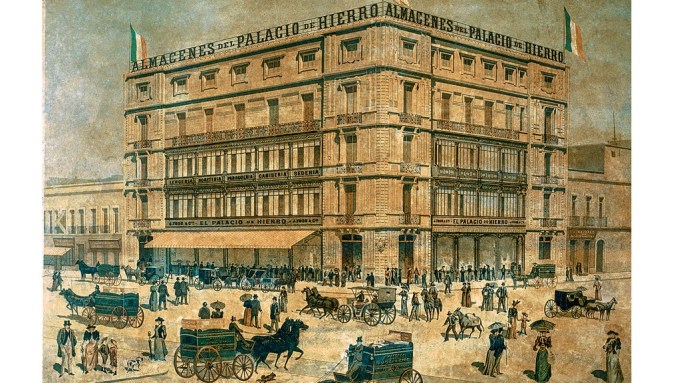 “They worked very hard and even slept on their shop’s counters,” said Mexican history professor Luz Maria Silva, recounting the story of Joseph Tron and Joseph Léautaud, two French entrepreneurs who arrived in the country in 1864 and opened a small shop in Mexico City’s downtown district.

The two partners sold a variety of goods imported from France, including fabrics, clothing and soap, in their store, located in the historic Zócalo Square, where Mexico City’s Metropolitan Cathedral currently stands.

They did so for a few years, until, in 1867 — following the end of Mexico’s French occupation — demand for European and upmarket goods began rising in Mexico, prompting the two now-wealthier businessmen to explore ways to expand their store.

As Frenchmen, they sought answers in France, where several department store trademarks were becoming increasingly popular.

The men traveled to Paris to meet Eiffel Tower architect Gustave Eiffel, who also designed the cast-iron structure of Le Bon Marché’s first store, to gain ideas about how to build a similar structure in Mexico City. They also visited department stores Le Bon Marché, Printemps and La Samaritaine, as well as Harrods in London, among others.

Back in Mexico City, the two Josephs pooled their savings and for 85,000 pesos, bought several houses to build the first El Palacio de Hierro in the downtown district, also fairly close to Zócalo Square.

El Palacio’s maiden store measured about 7,000 square feet and was about a third of its current size, according to Silva.

That plan hit a brick wall in 1914, however, when a short-circuit in a window triggered a fire that destroyed the entire store. The executives, including Tron’s brother Henri, did not give up, however, continuing to sell an expanding array of merchandise in buildings across the ruined building.

They persevered, and in 1921, reopened a larger and glitzier El Palacio de Hierro. The new store also marked a change of sales strategy for El Palacio to cater to booming demand for luxury and aspirational clothing on the back of an expanding Mexican economy.

Indeed, El Palacio shifted gears to become more of an upmarket emporium and less of a mass-market retailer.

The fledgling downtown shop, designed by French architect Paul Dubois and boasting an impressive glass dome, was created with that purpose in mind.

As business flourished, El Palacio opened its second store in the city’s tony Roma quarter in March 1958. That year, the retailer also launched a store credit card, the first of its kind in Mexico, where the credit card industry had not yet taken off.

El Palacio was a then a very profitable and debt-free enterprise, according to Silva. Aware of its potential, Alberto Baillères, the son of Mexican banking and mining tycoon Raúl Baillères, encouraged his father to take over the retailer. Trusting his son’s instincts, the Baillères family bought a controlling stake in El Palacio de Hierro, taking over just before Christmas 1963.

Under the Baillères family, which still owns 80 percent of El Palacio through its Grupo Bal business conglomerate, the retailer entered a period of very robust growth.

El Palacio’s acquisition was a savvy bet for Baillères, helping build the entrepreneur’s wealth to turn him into Mexico’s second-richest man with an estimated net worth of $18.2 billion, according to Forbes. In Mexico, Baillères’ wealth is only second to telecom and retail tycoon Carlos Slim, the world’s second richest man and owner of the competing Sears de Mexico department store franchise.

Soon after the acquisition, Baillères introduced an overarching strategy for El Palacio: to make it Mexico’s best store — “not the biggest, but the best,” Silva emphasized.

It began fleshing out its store-credit business and introduced the NCR 315 computer to automate business processes such as inventories and sales.

Then, in 1980, El Palacio’s third outlet in Mexico City’s Perisur mall swung open for business. The establishment was the first to offer individual brand corners and in-store shops. Through a marketing campaign dubbed “more than a place, a magnificent experience,” the retailer promoted a lifestyle-inspired shopping experience.

In 1989, El Palacio opened another outlet in the Centro Coyoacán mall, the first owned by the Baillères family, in southern Mexico City. Four years later, the Centro Santa Fe store was inaugurated. Since then, the firm has opened four more units, the latest of which stands in Mexico City’s upscale Interlomas mall.

Getting there, however, wasn’t easy, Silva said.

Apart from working to differentiate itself from archrival Liverpool, which operates nearly 100 stores, the company faced challenges in entering other Mexican cities with different demographics and consumer targets.

“Expanding to Monterrey had its challenges because people there like to go shopping in American malls,” Silva noted. “So the company had to work to convince consumers to buy in El Palacio by offering special services and top-quality products.”

The Monterrey store was built as a place where people can walk and socialize with friends while shopping, Silva said, as a way to encourage consumers to spend more time in El Palacio. The chain faced similar difficulties positioning itself in the beach town of Villahermosa, where people have different apparel requirements and tastes.

El Palacio also had to fight to win wealthy Mexicans, who have for years jetted to New York, Miami or Paris to buy luxury apparel in high-end boutiques.

“We have worked to bring [in] the world’s biggest luxury brands,” added an El Palacio source. “If you want Marc Jacobs, Loewe, Fendi, Gucci and the like, we have it right here. You don’t have to leave Mexico anymore.”