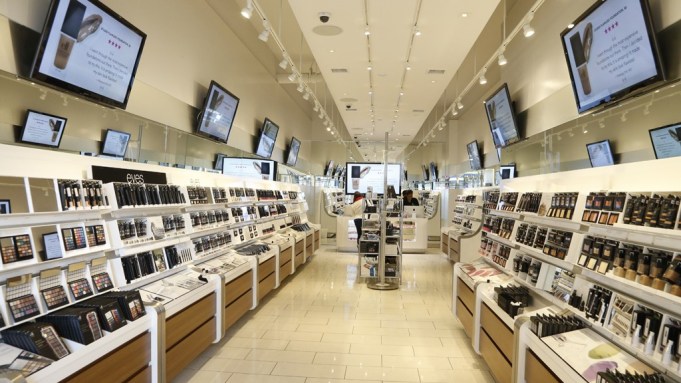 E.l.f. Cosmetics quietly opened its first retail flagship in New York’s Greenwich Village last week. A grand opening of the 1,200-square-foot space is planned for May 22.

It didn’t take fanfare to lure consumers to the unit. A highly trafficked neighborhood coupled with word of mouth on E.l.f.’s social media vehicles contributed to opening volume that has been above expectations, according to Joey Shamah, E.l.f.’s chief executive officer.

E.l.f.’s portfolio is now sold online, in retail partner stores and the branded store, which is believed to be the first mass value retail door in the industry. L’Oréal operates stores but prefers to use them as experimental laboratories for concepts to roll out to chains.

Industry sources estimate the boutique will achieve first-year sales exceeding $2 million. Two more stores are planned prior to the end of the year, said Shamah who added New Jersey is on E.l.f.’s expansion bucket list. E.l.f.’s total revenues are estimated to topple the $150 million mark.

E.l.f. is borrowing a page from prestige companies such as MAC Cosmetics, Bare Escentuals, Aveda and Origins, which sell products in vertically integrated stores. Shamah isn’t concerned retail partners will feel E.l.f. stores compete with their offer but thinks that they will actually benefit from what E.l.f. learns in its own environment. E.l.f. is rapidly expanding in major chains such as Walgreens, Wal-Mart and Target.

In particular, E.l.f. hopes to continue its strategy of trading consumers up to its Studio collection, priced between $3 to $6, which accounts for most of the merchandise in the store. E.l.f.’s portfolio also includes Essentials, the entry line at $1 to $2, and Minerals, priced from $3 to $8. The flagship offers about 550 stockkeeping units out of E.l.f.’s total lineup of 1,000 items.

“We can bring our online experience to a store where women can touch and interact with the products,” said Shamah. “It also differentiates us from the other companies in mass.”

The store sports gleaming white fixtures allowing the merchandise to pop off the shelf. There are testers for all products, which Shamah said are cleaned frequently and changed out to keep them fresh.

Ten large television screens reinforce E.l.f.’s online messages with makeup artist how-tos and editorial coverage. Free makeup lessons by professional makeup artists as well as complimentary makeovers are offered in the store. “We are getting great response and many people are booking appointments,” said Marianne Moreno, corporate retail liaison at the store.

Shoppers can sign up for appointments online and place orders for in-store pickup as well. Currently, the store is open 10:30 a.m. to 8:30 p.m. Monday through Saturday and 11 a.m. to 6 p.m. on Sunday.

Many of those entering the store appeared to know the E.l.f. brand, but there were also tourists and New York University students venturing in to check it out. Some compared the value pricing to purchases recently made at a nearby MAC Cosmetics store.

With customers flocking to the store, E.l.f. has made some early tweaks such as planning bigger shopping baskets. “Yes that’s needed,” said one customer with her hands full of purchases at the checkout.”