Towne by Elyse Walker is focused on casual luxury.

LOS ANGELES — Elyse Walker still talks about retail like she just got into it: excited, optimistic and not the least bit jaded.

“We’re going to take our time with growth, but will accelerate if the right opportunity passes,” she said of store growth.

Walker carefully crafted her fashion haven in the Pacific Palisades, not embarking on growth until its 16th year when a second Elyse Walker store opened in 2016 at Lido Marina Village in Newport Beach. Last September she debuted the luxury basics concept Towne By Elyse Walker, which in August opens its third door. It’s 2,000 square feet at Lido Marina Village, with a fourth, totaling 2,500 square feet, expected for spring 2020 in Calabasas, Calif. The young concept is exceeding expectations not even in its first full year in business with sales of more than $4,600 a square foot and a minimum inventory turn of four to six times annually. The business also began dabbling in private label in both Elyse Walker and Towne earlier this year.

The broader aim is to open two or three more Elyse Walker stores and then 18 to 25 more Townes. The cadence at which those openings might occur could be accelerated if the company works with a strategic partner.

She’s already being wooed by some, although Walker said the business isn’t in need of one.

“We are starting to consider a strategic partner,” Walker said, declining to go into details given nothing has been finalized. “It’s something that’s in the planning phases now, but we definitely have a few people who have reached out to us. The good news is our company is really healthy financially. We’re not under any financial pressure, which is great because a lot of times people bring in partners because they need to. But we don’t need to.” 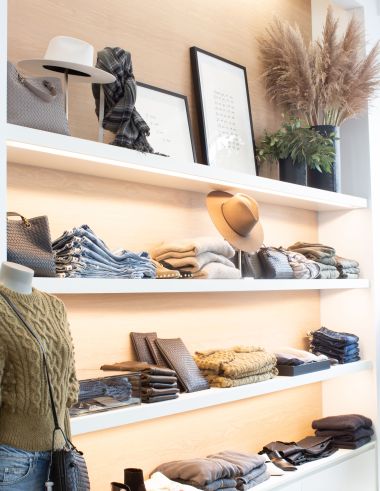 It’s a nice position to be in as Walker’s original store is set to celebrate 20 years in business this fall, and strong indications that this new business has legs.

“We’re known for fashion and runway, but still our bread and butter are the cardigans, T-shirts, jeans and sneakers,” Walker said of the reasons for starting Towne. “We always felt like if we had more space, we could sell more basics. It’s been well received and we’re super excited. People walked in and they’re like, ‘We get it. It’s part of the Elyse Walker point of view,’ which is everyday, casual luxury.”

Walker said the team has found the sweet spot for Towne’s footprint runs between 2,000 to 2,500 square feet, which is smaller than the Elyse Walker stores.

“They’re a smaller template than Elyse Walker stores but they have a much faster turn,” Walker said. “One thing that sometimes confuses people is they say, ‘Oh, Towne is your inexpensive store.’ It’s not. It’s not based on price point. It’s based on styling. We can have a $95 T-shirt or a $1,200 sweater. It’s luxury basics. We’re selling Bottega Veneta, Saint Laurent, Mother Denim. It’s what you grab and go and throw on.”

The men’s business is doing well, accounting for 35 percent of overall sales. Interestingly, it was a segment Walker said she was nervous about getting into after trying men’s in the past and then ultimately shuttering it in a few years.

Walker also launched into private label this year, a move she said will help margins. The business currently has T-shirts in store, with a blouse in development for fall and additional pieces in the works.

“It’s pleasing to me,” Walker said when asked about Towne’s performance. “We planned for it. We saw these numbers in our main [Elyse Walker] store at the end of the month, at the end of the season and at the end of the year. It was very, very clear to see and, to me, [inventory] turns and margins always work hand in hand. They don’t have to, but in our case they 99.9 percent do. Another fundamental building block with Towne are color multipliers. That was something where we were always tight on space in the Elyse Walker stores, but if there’s a great basic crewneck people buy it in black, navy and white. People will buy multiples.”

One other aspect that’s also quite clear: Walker knows her business and has a kept a steady hand on all aspects of it, carefully crafting the assortment and loyal clientele before studying the numbers that supported the expansion of the business.

“I love building a team,” she said. “I love still working with the team. I love buying. I love construction, whether it’s architectural build and interior design or even one of my favorite meetings of the week is the budget. That’s a build, too. You’re architecting how you’re allotting your investment in the space. I just still love what I do and I’m just warming up.”