There’s no let-up in sight.

This year, e-commerce in the U.S. will grow 16 percent to reach $462.17 billion, according to eMarketer, the research firm for the digital market.

“At some point, e-commerce sales growth will have to slow down, but eMarketer is not seeing any signs of this slowdown yet,” Yory Wurmser, eMarketer retail analyst, told WWD on Tuesday when his research firm released a bevy of bullish predictions. “We’re in the midst of a resurgent period of e-commerce growth, fueled by better e-commerce interfaces, better fulfillment and increased mobile shopping and buying.

“In fact, eMarketer estimates that e-commerce sales grew 16.2 percent in 2016, the fastest rate since 2011,” Wurmser added. “We expect 16 percent growth in 2017. By 2021, this growth will slow slightly to 13.5 percent, but in absolute terms, e-commerce sales will actually grow by larger amounts than they grew this year.

“It’s really hard to say where e-commerce sales will top out. Retail includes sectors like gas stations and auto that will always be primarily offline. Other sectors, such as books and consumer electronics, already have very high penetration rates for e-commerce.”

“In terms of total online sales, apparel has the most online sales dollars. Online sales, however, account for a much smaller percentage of total sales in apparel than in computers and consumers electronics.” 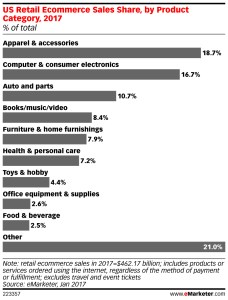 The pace in m-commerce is not letting up, either.

According to eMarketer, in 2017, m-commerce will reach $157.14 billion, up 35.5 percent over last year’s figure. And for the first time, m-commerce’s portion of e-commerce will exceed one-third (34 percent.) M-commerce is projected to comprise 3.1 percent of total retail sales this year in the U.S.

In addition, the number of American shopping digitally continues to increase. This year, there will be 183.3 million digital buyers in the U.S., up 3.7 percent over last year. EMarketer noted that for the first time, more than two-thirds of the population, or 68 percent, will be digital buyers.

In 2017, there will be 147.33 million mobile buyers (14 and over), up slightly more than 8 percent over last year. And 64.6 percent of those mobile buyers will use a smartphone to make the purchase.

EMarketer said its forecasts and estimates are based on an analysis of quantitative and qualitative data from research firms, government agencies, media firms and public companies, plus interviews with top executives at publishers, ad buyers and agencies. 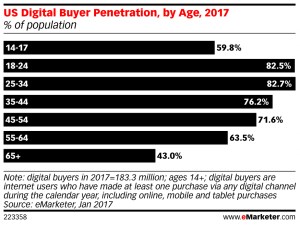