Pucci has opened a new boutique in Capri, where Emilio Pucci kicked off his career in 1951. 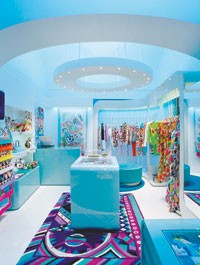 MILAN — It’s a homecoming of sorts for Emilio Pucci.

This past weekend, the fashion company known for its bold prints opened a new boutique in Capri, the exclusive Italian island considered the jet-set destination par excellence, and where Emilio Pucci himself kicked off his career in 1951.

The new boutique on tony Via Camerelle replaces the original store in the beach area called La Canzone del Mare, a store that closed in the early Nineties, as it was no longer strategic in that location.

“It’s always moving to come back to Capri, but especially now. It’s such a joy to see the brand here once again,” said Laudomia Pucci, Emilio Pucci’s daughter and the image director of the house.

“It was part of our original plans to open a store here,” said Pucci, whose company is now controlled by LVMH Moët Hennessy Louis Vuitton.

The 324-square-foot boutique maintains the building’s original high, vaulted ceilings and arches, and to make the most of the space, Plexiglas, metallic and wood furniture has been inserted into preexisting niches in the walls to display clothing and accessories. The dominant color is turquoise, which contrasts with the bright colors of the carpet lit up by Pucci’s famed Vivara print, inspired by the island’s sea and sunrise. Vintage photos of the designer on the island and drawings by Pucci embellish the wall on the left side of the store.

Catherine Vautrin, chief executive officer of Pucci, said it was a “dream come true — we are returning to our roots, the starting point of the company in this highly symbolic place.”

While not providing sales estimates, Vautrin said she expects the new boutique’s revenues to be at the level of the Saint-Tropez boutique.

While Italy and the U.S. are the brand’s strongest markets, accounting for about 60 percent of sales, the company is expanding around the world. Last year it opened two freestanding stores and two shop-in-shops in Japan, and this spring Pucci opened boutiques in Seoul and Dubai, United Arab Emirates. There are currently 22 brand boutiques in the world.

LVMH does not break down figures by individual brands, but market sources estimate Pucci’s sales at about 30 million euros, or $36 million at current exchange.

The latest store brings to 18 the total number of Pucci units worldwide. Laudomia Pucci took on the job of keeping his vision intact following her father’s death in 1992. The business still operates from the family’s ancestral palazzo in Florence, with Christian Lacroix as creative director of the Pucci collections. Laudomia Pucci said his arrival has provided “what we need right now: amazing talent and strong vision.”

She added that the main focus over the past 13 years has been “maintaining my father’s creativity.”

“The growth of the collections was inevitable,” she said. “We are growing in ways he would have wanted. In addition, my father really wanted me to be involved in the business. For Italians, in particular, family businesses are still very important.”

The U.S. was the first market Pucci entered after Italy, and today the brand is distributed in stores such as Saks Fifth Avenue and Neiman Marcus, Pucci said, adding that they see the American market as key to the brand’s future growth.

Pucci currently operates four stores in the U.S. — two in New York, at 24 East 64th Street and at 701 Fifth Avenue, as well as one in Las Vegas at The Forum Shops at Caesars and one in Palm Beach, Fla., at The Esplanade.

“We have not ruled out other locations, such as Beverly Hills, which could be a possibility,” Pucci said. “But as we grow, we’ll also strive to keep our niche and remain special by offering the customer that one collectible Pucci scarf.”