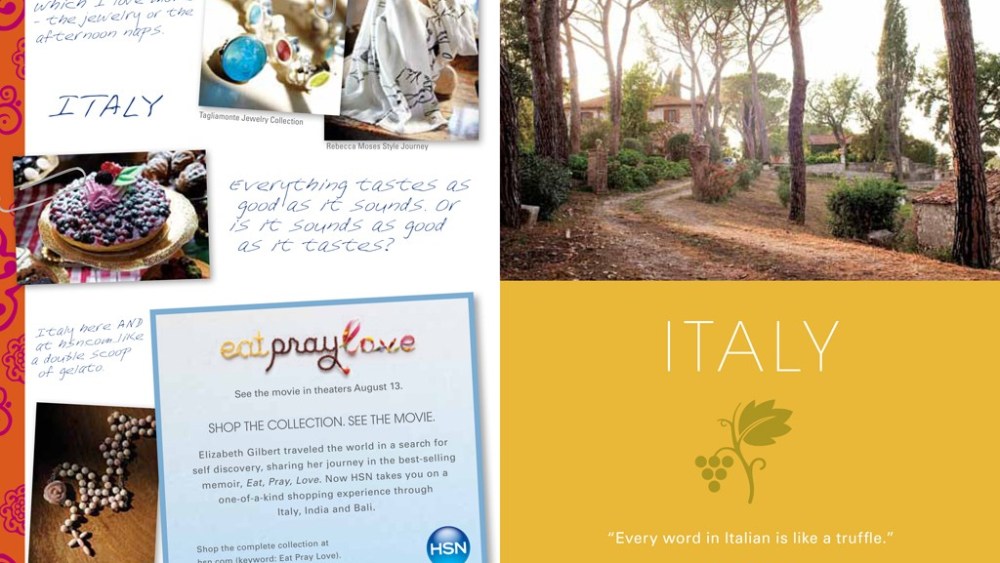 LOS ANGELES — HSN is ready for its Hollywood close-up.

With a slew of multiplatform tie-ins with movies, music and television, the network is establishing itself as an entertainment and marketing channel though which studios can harness the power of its 96 million-home reach.

“A few years ago, we started to build a strategy around entertainment as a whole and said, ‘How do we create a one-of-a-kind shopping experience surrounded by great products?’” said Bill Brand, HSN’s executive vice president of programming, marketing and business development, who joined the company six years ago after working at Lifetime and VH1. “I didn’t have HSN on my radar, but Mindy Grossman said, ‘We can be an entertainment network.’”

Brand said during the first few years of his tenure he and Grossman, HSN’s chief executive officer, had their work cut out for them, embarking on a Los Angeles road show to meet with the heads of marketing at movie studios.

“We said, ‘We can combine shopping with your great stories and make a great experience for our customers.’ Our women want to know what’s going on in the movie world,” said Brand.

With the vast viewership, the potential for ticket sales wasn’t lost on studios.

“What they find appealing is we have an engaged customer base of women who respond to many of the things we present to them,” he said.

“Our customers loved it and they also went to the movie,” Brand noted. “That really impressed the Hollywood community. Not only did we treat their property with respect, we also delivered audiences to theaters.”

In pre- and post-event customer surveys, more than 75 percent said the HSN tie-in increased their interest in the movie, and more than 70 percent said they planned to see the movie on opening weekend. While there’s no definitive way to calculate what percentage of the box-office take came from HSN customers, Brand said there’s a definite correlation between the marketing efforts and response from customers seeing the film.

“When we do entertainment events, we do see a spike in viewership and lift in engagement and sales,” he said.

Since then, the network has done initiatives with the films “Footloose,” “The Help” and “Snow White and the Huntsman.” “The Help” event included exclusive collections by Lela Rose and Cynthia Rowley and cookware and food items from chef Martha Hall Foose and Viking, as well as a set appearance by Academy Award winner Octavia Spencer.

“We were extremely pleased. They are smart marketers who know their core audience and the two opportunities strategically aligned,” said Don Gross, vice president of global promotion for The Walt Disney Studios, which handles all distribution and marketing for Dreamworks films, including “The Help.”

“There aren’t many marketing platforms for records anymore, so our TV team worked with the labels to bring it back. In addition to the live performances, we are able to give early access and something exclusive that they can have first,” said Brand of the live concert shows and preordering the CDs.

HSN’s most recent program was a TV tie-in earlier this month, the launch of Forsaken, a beauty and home collection inspired by HBO’s “True Blood.”

While Brand declined to reveal which movies are on the roster for next year, he said the network is in heavy production for the 2013 slate and already has staffers going to a film set in Europe for a movie that opens in 2014.

“The Hollywood community understands what it takes to be successful, which is early access,” he said. “You need nine to 12 months on these types of projects to create product and great experiences.”

The “Snow White and the Huntsman” tie-in exemplifies this point. The network had access to visuals from the movie and to the set about a year before its release.

“My primary goal was to create a marketing vehicle for this film,” said Stephanie Sperber, Universal Studios’ president of partnerships and licensing. “At the box office, the HSN customer — women over 25 — tends to be underrepresented. To recognize that audience is very valuable. They tend to watch the channel for a long time, so having a 24-hour dedicated show with quality merchandise and content was a great thing.”

An HSN designer got to speak with Academy Award-winning costume designer Colleen Atwood in London, who told her that she had never created a consumer collection before. The resulting capsule collection launched on the channel’s 24-hour May 30 event just before the movie’s opening night. Atwood appeared on HSN to sell her line and share some of the original costumes and her stories about dressing the stars. Other merchandise included exclusive pieces by Loree Rodkin and Heidi Daus, as well as thematic items from Ranjana Khan and Adrianne Landeau.

“We are used to seeing licensed products and it far exceeded anyone’s expectations,” said Sperber. “If we ever have any movies that align with their customers, there’s no question we’ll be calling them again, and I’m sure other studios want to do the same.”

For Paramount Pictures’ “Footloose,” HSN sponsored the movie’s Hollywood premiere in addition to 24 hours of programming featuring footwear exclusives from Vince Camuto, Steven by Steve Madden and Twiggy London among other fashion and beauty merchandise.

LeeAnne Stables, president of consumer products at Paramount, said the studio is planning to partner again with HSN on an end-of-year release that Stables calls “a fantastic program that will probably go down in history as one of the perfect movie promotions.”

Not only have the programs helped keep core customers engaged, they have raised HSN’s profile among first-time users.

“Our goal is trying to convert them into customers by changing their perception of the brand,” Brand added. “For us, it’s been a key part of how we’ve repositioned the brand. We went out there, took some risks and now it’s cool to see that the industry has taken notice.”