The West Coast store gives the brand a retail presence on both coasts after the brand opened a unit in New York’s SoHo neighborhood last month. 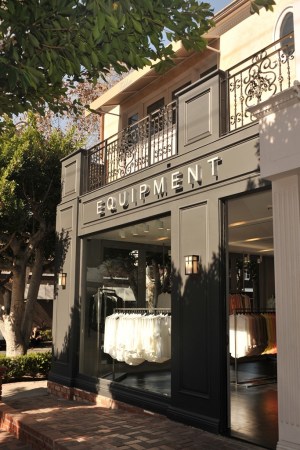 Another piece of Equipment’s revival has fallen into place with a new store on Melrose Place in West Hollywood, Calif.

The West Coast store gives Equipment a retail presence on both coasts after the brand opened a unit in New York’s SoHo neighborhood last month. It continues the momentum the brand has experienced under the stewardship of Dutch LLC creative director and chief executive officer Serge Azria, who relaunched Equipment three years ago with a two-pocket silk shirt and has been strategically widening its scope.

The brand was created in 1976 by Christian Restoin and at one point had as many as 14 stores, the last of which closed in 1998, according to Azria. At the moment, Azria isn’t in any rush to replicate Equipment’s past retail expanse and has no immediate plans for more stores. He does envision that eventually the brand could have locations in the world’s fashion capitals such as Paris, London and Tokyo.

“I am not going to open 100 stores everywhere,” he said. “This to me is an image thing to show the world what Equipment is and what it is going to be.”

The Melrose Place store leaves no doubt that what Equipment is centers on shirting. There are at least 150 shirts in the store, mostly presented on racks in a myriad of colors and styles. There are 25 white styles alone showcased in the window. It took Azria about a year to perfect the Signature two-pocket shirt that Equipment introduced in 2010, and that style, available in 53 shades, now accounts for 60 percent of the brand’s sales.

The store, which carries merchandise priced from $158 to $438, also shows Equipment’s evolution beyond its Signature style. There are 15 shirt bodies sold in the store, including T-shirt and one-pocket varieties, as well as cashmere items that were introduced for fall last year. Azria expects to add a blazer to Equipment’s repertoire in fall 2013, and sunglasses, footwear and watches are on the to-do list, too.

Working with Paul Bennett Architects, Azria was insistent the store design should not overshadow the clothes. “The concept is modern and kind of cold because there are so many colors in the collection,” said Azria. “I wanted something almost like an art gallery.” The store even has an art wall where currently a Retna piece owned by Azria hangs. Art will rotate and next up will likely be images from Equipment’s spring ad campaign with Jamie Hince and Alison Mosshart of The Kills.

Painted in gray and white, the store contains a few elements inspired by Equipment’s former stores, notably lighting arranged in parallel lines along the ceiling and drawers housing extra inventory on the floor, which originally enabled Equipment to open stores with tiny footprints. “Out of 600 square feet, they were doing 2.3 million euros a year,” said Azria. “I think I am going to beat that.”

In the SoHo store, he elaborated, “The results so far are over the projections about 20 percent every single week.”

With 1,000 square feet of selling space, the Melrose Place store’s retail floor is slightly smaller than the 1,200-square-foot SoHo unit. The Melrose Place store has an additional 500 square feet in the back that’s a dedicated press area with some 100 shirts on display from Equipment’s archives. Every three months or so, different shirts from Azria’s stockpile of vintage Equipment shirts — he has roughly 1,600 —will be placed in the press area.

In addition to its own revival, Equipment is taking part in the revival of Melrose Place. With the recent openings of Isabel Marant and Joe’s, and the upcoming openings of L’Agence and a home-focused store from Bottega Veneta, action on the street has been heating up following several years of little movement. “Melrose Place is one of the most charming and beautiful places in L.A., and I think it is starting to pick up,” said Azria.

His approach to Equipment — not to mention his two other brands, Joie and Current/Elliott — was given a stamp of approval last month by TA Associates, which purchased a 60 percent stake in Vernon, Calif.-based Dutch LLC. It’s obvious what the Boston private equity firm liked in Equipment. Azria said the brand’s business doubled last year and, in the first quarter of this year, Equipment is already performing 30 to 40 percent above expectations. The brand is distributed to 1,200 retail accounts in 65 countries.