Erwin Winkler takes Ulta from a drugstore mind-set to a three-dimensional mass, prestige and salon emporium. 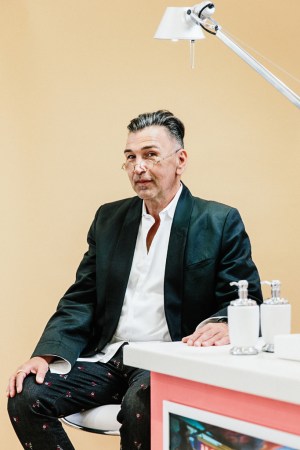 When Erwin Winkler was first courted to join Ulta Beauty as vice president of creative services more than a decade ago, the Manhattanite had never heard of the specialty beauty retailer. He was flown from New York to Chicago to size up its retail format and what he saw was a drugstore-like environment with aspirations to be grander.

At the time, Lyn Kirby, then president and chief executive officer of Ulta, told him, “We want to get to a different place,” and Winkler, who formerly held positions at Coach, Escada and Ralph Lauren, was sold. “My reaction was basically that I get it,” he said. “I try to bring as much style and luxury to the store design as we can possibly afford.”

Today, Ulta’s stores are in a much different place. That was clear when Winkler recently strolled through a store opened in February in Auburn, Calif. An example of the seventh iteration of Ulta’s store design is a far cry from the secondand third-iteration stores Winkler encountered early on. It combines an unprecedented number of prestige brands with mass brands and professional hair care, and upgrades the look to match the upgraded beauty selection.

“The original DNA hasn’t changed, but it’s matured tremendously and, every year, continuously matures, and the guest experience has improved and continues to improve,” said Winkler, now Ulta’s senior director of store planning and design.

Ulta’s typical store houses some 400 brands and occupies 10,000 square feet with 950 square feet dedicated to a full-service salon. Power centers are mainstays of Ulta’s retail real estate, but malls are increasingly in the real estate mix. As of May 2, the retailer operated 797 stores in 48 states and is progressing toward a goal of reaching more than 1,200 stores.

Winkler and his team of 14 store designers and planners get involved prior to Ulta signing leases. It takes six to eight months for a store to be completely designed and built out. “What we’ve really created in the store design is [a] kit of parts and a philosophy of flexibility,” Winkler said.

The exterior is usually white to provide a fresh, clean invitation to enter the store premises, and has orange awnings and a gray sign that appears white at night. Windows are decorated with
promotional and branded materials. An 80-foot frontage expanse permitting customers to gaze into the store is ideal. “As we’re starting to get more walking locations, we are starting to think about evolving the windows in a very different way. That’s yet to come, but it’s definitely on our radar,” Winkler said.

As customers walk into the store, tables stocked with value and important new items greet them. Those items are swapped out every three weeks or so. As customers travel deeper into the store, Winkler described how they go from beauty wants at the front — color cosmetics and fragrance — to beauty needs toward the back, where styling tools, professional hair care and the salon sit. Along the walls are lit arches, newer elements of the stores, dedicated to select brands and categories.

Winkler, who majored in art history at Dartmouth College and obtained a graduate degree in architecture from Harvard University, likened the store layout to that of a medieval church. He said, “You have the high altar that draws you to the back. You have two aisles, instead of one main aisle, that take you to the back, and you have chapels on the sides.”

Winkler’s imprints are everywhere. “I think about a lot of little things that you’re not supposed to notice, but that you do feel,” he said. Case in point: The prestige displays were updated around seven years ago to move away from holes for each item, contain in-shelf lighting and add three-inch shelf strips to hold paper with extensive information.

The hallmarks of the prestige displays — they have lush graphics, are 11 inches off the ground, compared to four inches, and have four versus five shelves as well as internal illumination — are engulfing more of the store. “It’s at a height that’s more accessible,” Winkler said. “I always do the butt test. What woman in the world wants to shop with her butt out. It’s that simple.”

Winkler has been enhancing the aesthetics of the Ulta-branded areas within the stores and, perhaps on a bigger scale, renovating fragrance presentations. By the end of the year, 75 stores should have redone, more intimate fragrance areas. “Everything should have a tester and clearly be brand driven from the top. It didn’t have the tactile luxury and experiential part that prestige had,” Winkler said.

Winkler has also reexamined salon concepts during his tenure. The salon is no longer hidden and walled off. It has a low glossy white wall, concierge desk and chairs for waiting that demarcate it, but customers can peer in. “The salon is set up to be visible, to be animated as opposed to being separate,” Winkler said.

Whether all services should be so open is up for debate. Ulta customers are happy to have their brows done right on the store floor. They are less certain about skin-care services on the floor.

Going forward, Winkler’s challenge is to keep the stores novel while handling a burgeoning fleet. He said, “It’s much bigger, but I certainly would never want to sacrifice the finesse that I think we’re able to do because it means something to her [the Ulta customer]. It really, really does.”