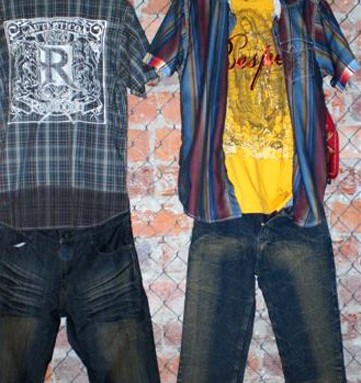 Orange Clothing Co. is embracing Hispanic culture and traditions as it tailors marketing to the fastest-growing consumer segment in the U.S.

The Miami-based young men’s firm targets the Hispanic consumer with distinctive elements such as Web site messages to Spanish and English-speaking shoppers, as well as blogs, Facebook and MySpace pages in the two languages, e-mail blasts to Hispanic customers and sponsorship of Mixed Martial Arts, a sport rising in popularity among Latin fans.

The company’s specialty marketing tools include hangtags attached to garments by wooden rosary beads, and patches depicting images of the Virgin Mary sewn into apparel and protected by patents and trademarks.

“Customers appreciate special features like that, and that’s one of the things that sets us apart,” said Michelle Schucher, director of marketing.

The company, founded in 1999, features six lines, including top seller Revolución, with its jeans and woven shirts selling at Macy’s, Lord & Taylor and specialty stores across the U.S. In addition, Imperio Latino, or “Latin Empire,” a line of colorful T-shirts, is sold at retailers such as J.C. Penney and Kohl’s, and Limon y Sal, or “Lemon and Salt,” which includes T-shirts, tops, shorts and hoodies, is available at Kmart, among other stores.

The firm’s Fast Boarding, Crue Boarding and Red brands for the skate and surf markets are sold at specialty shops and major retailers, including Macy’s, Wal-Mart, J.C. Penney, Kohl’s and Kmart.

Founder and president Scott Deutsch said in the three years since Orange Clothing introduced fashions aimed at Hispanic consumers the category has grown to 35 percent of the almost $20 million annual volume.

“I look for niche businesses where there are few players in the market, and realized in my own backyard [Miami, where Hispanics constitute more then 65 percent of the population], I was surrounded by my customer,” he said.

The strategies Orange Clothing uses could serve as a blueprint for firms seeking to carve out business in the Hispanic market, which almost doubled its purchasing power to $951 billion last year compared with 2000, according to the Selig Center for Economic Growth at the University of Georgia’s Terry College of Business. The center estimated that by 2013 Hispanic-Americans will have purchasing power of $1.4 trillion.

The Orange Clothing approach is “not something they had to learn; it’s something they live,” said Cynthia Cohen, president of Strategic Mindshare, a marketing consultant who has worked with the firm.

In a new partnership with Macy’s, the company for fall will introduce 15-second promotional spots for its product before movies in Hispanic-area theaters, with poster-board signs in lobbies.

The brand was a sponsor of the 2009 Latin Grammy Awards, offering T-shirts and drawstring bags in gift bags for nominees and winners, and outfits the bands Locos por Juana and Los Primeros. The groups also appear in photo shoots on Revolución’s Web page, where Orange Clothing is promoting a $500 cash-prize contest using the line’s stencil as the basis for “the most visually creative graffiti art you can come up with” that keeps the logo and Web address visible.

Graphic tops and distressed jeans and woven shirts by Revolución have roots in several Spanish-speaking nations, with hangtags reading: “Hecho por Latinos, para Latinos,” or “Made for Latins, by Latins.” T-shirts sell at retail for about $38; jeans, $60; woven shirts, $59, and polo shirts, $45.

Revolución asks Hispanic consumers to “Come join our family,” Schucher said. “We give them something they can call their own. They know we make and design this especially for them, because we also are the Hispanic customer.”

Orange Clothing introduces new styles four times a year. “Hispanic customers don’t want simple, basic merchandise,” Schucher said. “Everything is big to them: Their families are big, their ideas are big and you see that concept across our entire collection.”