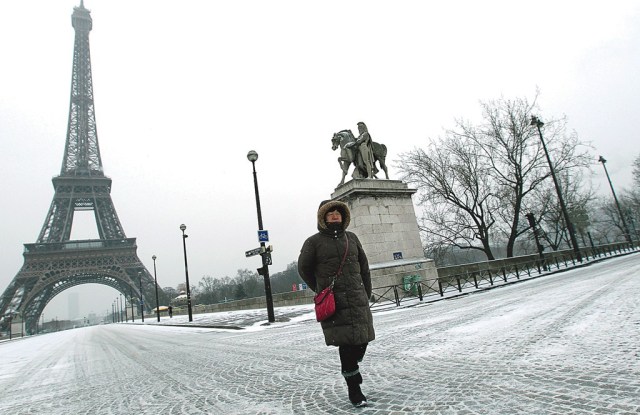 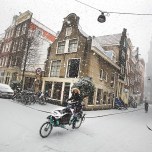 Over the past 10 days, winds from Siberia have been whipping westward, freezing over the canals of Amsterdam and the fountains of central London, and dumping snow on Britain, France, Italy and Eastern Europe. And there’s more to come, but so far the temperature has done little to dampen retail sales with discounted winter inventory — and new spring fashions — now selling side-by-side.

Most retailers admit it’s not an ideal situation, but at least the stock is moving.

Damart, the French maker of thermal clothing and underwear, said sales of its signature Thermolactyl T-shirt rose by 255 percent online, and by 155 percent in its network of 80 stores in France in the last 15 days.

Jurgen Dax, director of the German Apparel Retailers Association, said the ongoing cold wave has helped retailers reduce the winter apparel inventories left at higher than usual levels due to the unseasonably warm fall. “Winter apparel has sold very well the last ten days, at reduced prices of course, but at least some of the stock is gone,” Dax commented. “The cold snap came at the right moment.”

Until now, he went on, “We can’t say the cold weather is having a negative effect on sales of spring merchandise. If a woman sees something lovely for spring, she’ll buy it to warm her heart, regardless of how cold it might be outside.”

Inventories are still too high, he said, “because a lot of cold weather merchandise didn’t move and retailers bought too much. But it’s a situation they can deal with.”

“The worst thing to have is severe weather that’s slightly out of season. The good thing this year is that the cold weather is smack bang in the middle of the winter season. Retailers will have stocks of winter woolens and Wellingtons. If the cold weather had arrived not in January, but in April then it would have had a far more serious impact on retailers depending on seasonal goods.”

He said that in similar cold snaps, stores have seen about a 20 percent decline in footfall. “Some areas will be more affected than others, I would expect England’s southeast to see quite dramatic drops in footfall over the past week, but some of that will be recovered in online sales. As long as people can get to the shops, there will be some kickback in sales made with additional items that are needed in the cold weather,” Denison said.

Christian Witt, spokesman for the 10-door Stuttgart, Germany-based specialty store chain Breuninger, said winter apparel was currently in great demand. “And that despite the fact that we have a lot of spring merchandise in the store.”

As for sales of spring fashion, he said it comes in waves. “The fashion oriented, and we have many customers that want the very newest looks, are buying now. But for the rest, I guess the dream scenario would be for three more weeks of cold, and then the start of warm weather.”

Josef Voelk, co-owner of the multi-brand designer store The Corner in Berlin, is also not complaining. “People aren’t running out to buy summer dresses, but spring jackets, knitwear and accessories are performing well. Celine bags are absolutely flying out.”

Voelk noted The Corner seeks out somewhat heavier merchandise when placing orders for early spring delivery. “We know spring comes very late here, and so do the brands, which is why we have lots of warmer, woolly merchandise on hand. And business has been surprisingly good.”

He said January was “excellent, because first we had Berlin Fashion Week, and there were also a lot of tourists in town, partly because there was a big Russian holiday in January. The month was quite over plan, and now we have the Berlin Film Festival starting. All these parties and events really help. The city has been full.”

Liberty in London reported a similar trend to The Corner. “We did see a slight dip in the store business just on Sunday,” when the city was blanketed with snow, according to Ed Burstell, Liberty’s managing director. “But online was huge, so the shopper was deterred just on the venue due to the snow. Overall combined sales were up for the weekend by 12 percent. The balance of the week has been robust — and it’s all spring merchandise at this point as we are almost totally converted.”

Richard Dodd of the British Retail Consortium agreed. “Even if stores had coats and woolly jumpers tucked away in a back room, I don’t think they’d be bringing them out now,” he said. “It’s February, and retailers always assume it’s going to be cold and wintry. And most people aren’t planning on buying a new winter wardrobe at this time of year. They’re aware that we’re at the tail end of winter and that in six weeks or so, it will turn to spring.”

However, the bad weather has caused disruption with transport and deliveries, especially in Italy. “The recent heavy snows have caused significant problems in the shoe sector, as most Italian producers are located in Tuscany and Emilia-Romagna,” said Paola Bay, owner of the luxury shoe brand Zoraide. “The snow has caused serious inconveniences and delays in the delivery of merchandise.”

Silvio Albini, president of the trade show Milano Unica, the twice-yearly Italian textiles and accessories trade fair whose latest edition runs until February 9, said the weather has prevented some visitors from attending.

“The heavy snows that Italy has experienced from Bologna on south have significantly affected the participation of Italian clients. In addition, there are currently many uncertainties regarding the performance of the domestic market. Fortunately, we have registered strong participation from international buyers, which confirms that the future of our sector lies in the development of our presence in foreign markets.”