A recent round of cross-border deals and international expansion promises to radically redraw the department store landscape in Europe. 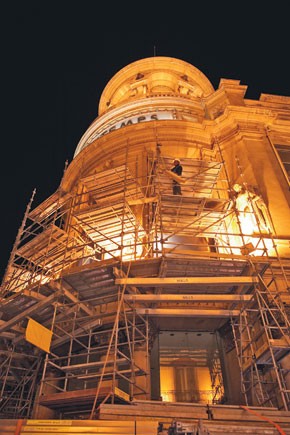 PARIS — A recent round of cross-border deals and international expansion promises to radically redraw the department store landscape in Europe.

KarstadtQuelle parent Arcandor of Germany in December sealed a deal with Italy’s La Rinascente and France’s Printemps to create a premium pan-European department store alliance that augurs for further consolidation in a sector once fiercely focused on its home markets.

The December agreement marked the second time La Rinascente, along with investors, had moved to leverage synergies across continental borders with the view to boost profits. In 2006, Italian entrepreneur Maurizio Borletti, who runs La Rinascente, led the pool of investors that purchased France’s Printemps chain from French luxury and retail group PPR.

PPR, the owner of Gucci, had come under pressure to dump the 17-store Printemps chain because it didn’t generate profits on par with its luxury activities.

Borletti spied opportunity. He is keen to entice customers with more luxury fashions and better store design, and has earmarked 280 million euros, or $408 million at current exchange, for the task.

In March, de Cesare plans to christen a revamped fashion floor at Printemps’ Haussmann flagship here and welcome new brands from Gucci to Yves Saint Laurent. A prodigious four-year renovation of the store’s historic facade is under way.

De Cesare also has hired Stephen Gan to art direct a campaign shot by David Sims and styled by Joe McKenna, and has recruited New York-based design firm Yabu Pushelberg, which has worked with Lane Crawford and done several W hotels, to carve out an impressive atrium in the middle of the store in a bid to elevate it to “iconic” status.

“We are creating a monumental temple of shopping,” said de Cesare, who joined Printemps last year.

De Cesare’s other plans include remaking Printemps’ store in Deauville into a luxury mecca and equally ambitious makeovers at many of Printemps’ units in the provinces, which are significantly upgrading their merchandise mix.

“We have a society that is becoming more affluent,” said retail expert Marvin Traub, who runs Marvin Traub Assoc. Inc., in explaining why European retailers are marching upscale. “Galeries Lafayette and Harrods have more luxury brands today than 15 years ago.”

Not all of the action is contained within Europe’s borders, however.

France’s Galeries Lafayette last fall signed a letter of intent to open its first stores in Asia, in Beijing and Macau. It already is busy on a project to open in Dubai next year. Britain’s Harvey Nichols, which already has stores in the Middle East, Hong Kong and Istanbul with local partners, is working on a store in Jakarta, Indonesia.

Perhaps not since the late 19th century, when Emile Zola wrote a novel called “Au Bonheur des Dames” about his fascination with Paris’ newfangled department stores, has so much excitement rippled through the sector.

Just a decade ago, Europe’s department stores — especially on the Continent — looked tired and dusty compared with competitors abroad. Retailers in the United States were consolidating and exploring ways to further upgrade their mix to mirror the growth of the luxury business. Asian retailers such as Lane Crawford created waves with their stores, as did those like Selfridges and Harvey Nichols across the English Channel.

“Our once-sleepy industry is finally waking up,” said La Rinascente’s Borletti. “Department stores [in Europe] have finally realized that their role isn’t to be the cheapest form of retail, but to target medium- to high-end customers.”

Borletti said the revitalization of European city centers, with people returning to live in the urban environment, was a factor. Stores located in the most prestigious neighborhoods saw their real estate portfolios skyrocket in value. This led them to ponder the viability of their business model and some leveraged their real estate to drum up capital to renovate.

Real estate was a major component of the acquisition of Printemps, and also played a central role in the deal with Karstadt, in which Deutsche Bank subsidiary RREEF, Pirelli Real Estate and the Borletti Group agreed to buy Karstadt’s valuable real estate portfolio from Arcandor.

In September, Printemps sold three stores outside of Paris to Unibail in an operation designed to help finance the chain’s revamp.

And, if further evidence were needed of the resurgence in the European department store and mass market sector, one just has to look at Carrefour’s newest shareholder: luxury kingpin Bernard Arnault, who in March 2007 took a joint 9.1 percent stake in the retailer with investment fund Colony Capital. The arrival of the new shareholders was one of the things that spurred Carrefour to look at spinning off its property division as well as make other changes that have begun to reverse the decline in its financial fortunes.

“A lot of department stores were not making money for a long time,” said Borletti. “As their real estate grew in value, it created a great opportunity. As a business decision, it looked more profitable to close and sell the real estate than continue to operate.”

Now some players are exploring consolidation as the next stage in fine-tuning operations. Traub said consolidation became inevitable as soon as Europe adopted a single market and currency. “There were too many economic advantages for consolidation not to follow,” he said.

It may be a case of the world flattening: Europe’s department stores now are judging themselves by criteria applied around the rest of the globe. Yet difficulties, including cultural and linguistic issues, loom before a significant trans-European player emerges.

One European department store that wields influence on the level of a Nordstrom or Neiman Marcus does not exist. European cultural fragmentation may be at fault. Each market operates one or two strong banners that resonate with local shoppers. Few banners have found success beyond their frontiers. (Galeries Lafayette’s one store outside of France, in Berlin, required a decade to break even.)

Rinascente’s nascent deals with Printemps and Karstadt suggest that a pan-European player will operate differently than a player in the U.S. or Asia. “I believe in local brands,” said Borletti, adding that he sees no rationale behind a rollout of Printemps in Italy or KaDeWe in France. “A department store is a local animal.”

Borletti said the proposed alliance between Rinascente and Printemps and Karstadt would pool logistics resources and serve as a platform for brands to develop in Europe.

“A real integration could happen three to five years down the line,” he said. “For the moment, we want to identify opportunities and avoid mistakes.”

“What basically we’ve signed is a letter of intent in which all [of the parties] will make efforts to see what type of integration will benefit [us all],” said Borletti, who added that the prospect of a brand dealing with one company in its business affairs held myriad benefits.

“It would simplify life for vendors,” he said. “It could be more profitable in that less time and less money would be wasted. We can become a larger player in the international department store scene.”