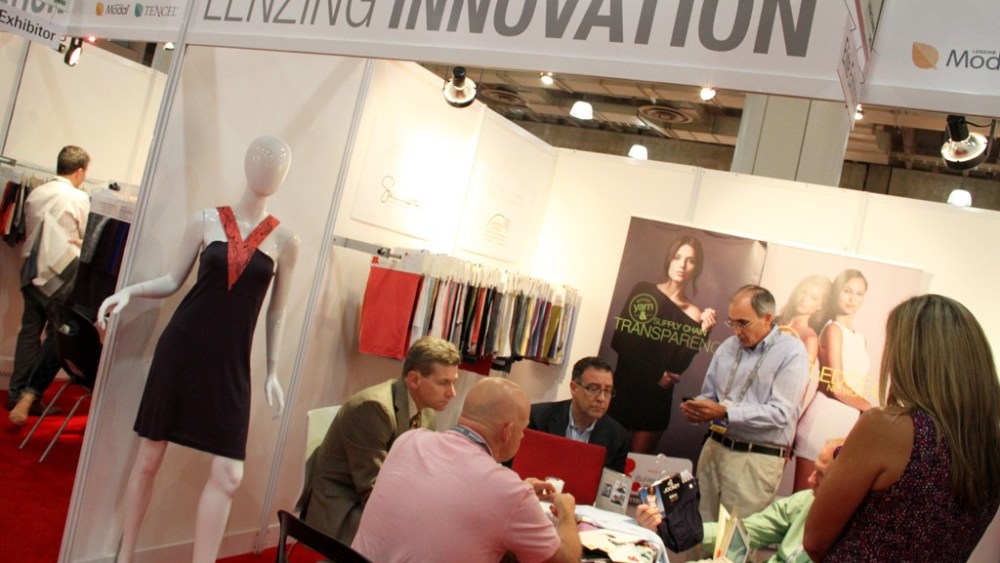 NEW YORK — The global landscape for textile and apparel manufacturing is being dramatically reshaped by a myriad of issues, from labor and environmental factors to fiber innovations and shifting trade winds.

Sustainability and corporate social responsibility are the new must-haves, with virtually every exhibitor and executive taking part in the latest round of fabric and sourcing trade shows here this month stressing the importance of proper compliance and adherence to production standards.

The Made in America movement that’s been brewing for a couple of years has fermented into a tasty niche of better-priced merchandise, notably yarns and knits for U.S. makers and for a growing export market focused on the Western Hemisphere. But in a surprising development, demand has emerged from Chinese apparel manufacturers seeking to upgrade their assortments by using high-quality U.S. yarns, according to executives from American spinners at the Texworld USA and Apparel Sourcing shows at the Jacob K. Javits Convention Center and SpinExpo at the Metropolitan Pavilion. Experts and organizers, including at last week’s Première Vision Preview at the Metropolitan Pavilion, said a more global strategy has evolved in manufacturing and marketing amid rising costs and problematic Asian production, and the lingering economic woes in Europe.

Philippe Pasquet, chief executive officer of Première Vision, said, “It’s very important to spread your business over as many markets as possible, instead of just one market, especially with what’s going on in Europe and the difficult economic situation.” Pasquet said the U.S. economy has shown strong recovery and is the top market for many European fabric houses. He said export opportunities also exist in developing markets such as Brazil, Russia and China, where PV has launched trade fairs in recent years.

Karine Van Tassel, founder and organizer of SpinExpo, said, “What happened in Bangladesh was an alarm went off that behind all the cheap products there was a lot of blood spilled. It would seem that people on the streets are concerned about this, and if told they can keep people alive for one more dollar, they say, ‘Yes, I will spend one more dollar.’ But there is a gap between what the consumers on the street are ready to accept and what prices the buyers, pressured by their companies, will accept.”

Van Tassel said she has heard much about Chinese mills wanting to import U.S. and European yarns and fabrics to make apparel for their domestic market because “the Chinese yarns and fabrics are good quality, but they lack that certain panache and innovation that the European and American mills can offer.”

The importance of diversity in manufacturing, along with buying patterns that have brought a deeper need for quick response and better quality, has spurred a revival of U.S.-made textiles and apparel.

“I can’t believe I’m even having conversations about the revival of U.S. manufacturing,” said Jim Andriola, sales manager for Texollini, a knitting mill in Long Beach, Calif. “I really never thought it was coming back.” Andriola said Texollini is “even working with other companies and investors on ways to combine resources to increase volume capacity capability.”

Kim-Bang Nguyen, director of export promotion at the U.S. Department of Commerce’s Office of Textiles and Apparel, said, “I’ve seen the industry change…and I think we’re in a very exciting phase right now of adaptation and growth. We see a lot of changes in the industry for companies wanting to innovate and improve and from consumers wanting to buy Made in USA products, and from the free-trade agreements we have signed on to. All the indicators are showing a positive trend.”

Nguyen, speaking at a Texworld seminar, said the National Export Initiative launched by President Obama in 2010 to create jobs by increasing exports is well on its way to doubling exports by 2015. She said since the launch, U.S. apparel and textile exports have increased by double digits.

Commenting on the impact of labor and safety problems in Asia on U.S. manufacturing, Nguyen said, “In every situation we have to look at the silver lining. With all the issues around the world, the silver lining is the U.S. textile and apparel industry has an opportunity to compete and reinvent itself.”

Jeremy Wootten, secretary-treasurer of the SEAMS Association, which helps promote economic growth for U.S. sewn products companies, said, “Our annual networking conference we just had in April was the most well-attended we have had since 1995. It had over 200 factories and supplier representatives that were all U.S.-based, with significant levels of production. There was a consensus that orders were up and the level of interest is significantly higher.”

Wootten said rising labor and energy costs in Asia have made people look closer at the “full-value equation, not just the FOB [free on board] cost,” including the risks of getting goods shipped on time and factory labor problems, adding to the value of buying domestically. He added that SEAMS has been approached by retailers “looking for help finding the right vendors to balance their production.”

Pat Tabassi, marketing manager for Los Angeles-based Design Knit Inc., said at her booth at Texworld, “There is a definite shift to come back to the U.S. for manufacturing. We sell to a lot of local L.A. brands, but we also service the New York market. The last few months have been particularly good.”

Tabassi said the nature of Design Knit’s business as a knit-to-order mill is well-suited to better brands and stores looking to produce at least part of their merchandise in the U.S., with fast delivery, hands-on quality control, design innovation and relatively low minimums.

Ronald Sheridan, president of STC Textile Inc., who was representing Lugan Fabrics at Texworld, said the Los Angeles maker of knit tops has expanded its private-label business because more retailers want U.S. production and the quick turn and higher quality it brings. Sheridan said, “Companies are realizing that the idea of long lead times from China without the best quality just doesn’t work for them anymore, especially in the better contemporary market. They want a more modern way of manufacturing that’s better, faster and closer to home.”

Executives said the Central America Free Trade Agreement has boosted their business. Buhler Quality Yarns Corp., based in Jefferson, Ga., has seen strong export business from CAFTA, and is now seeing more activity from places such as China.

David Sasso, vice president of international sales at Buhler, said, “It’s a year like there’s never been in our history because we’re shipping more yarns to Asia.” Sasso said this is brought on by the Chinese government buying up cotton reserves, which has raised cotton yarn prices, and the desire of knitters there to buy quality yarns such as Supima cotton that is only spun in the U.S. and Peru.

A company combining the Made in America and sustainability movements is Pure American Naturals, a “farm-to-fiber” firm in Millerstown, Pa. Judith M. Shoemaker, a veterinarian and executive with the company, explained that PAN is a mohair and wool manufacturer that is a part of an alliance of farmers, spinners, designers and manufacturers dedicated to “delivering quality natural textiles, produced humanely and ecologically, with integrity and traceability throughout the supply chain.”

Glen Cauffman, who owns the farm, said PAN “bridges the gap between farmers and consumers.” Cauffman said the reaction at SpinExpo was “excellent,” and that he even had interest from some of the Chinese yarn makers there wanting buy PAN yarn to export to China for knitting.

Designer Laurie Perrone said, “We want to work with companies that have a strong consumer connection, that understand what it means to be a sustainable company and that believe in the Made in America movement.”

Andriola at Texollini said the firm’s “most important brand pillar is responsible environmental stewardship.” He said as a California-based mill, the company is guided by strict environmental laws, so “you can try to fight those provisions or embrace them. Texollini has chosen to embrace them and reduce our environmental footprint.”

He said this includes the types of chemicals and dyes that are used, investing in equipment that reduces energy and water usage, and using “eco-sustainable fibers” such as Lenzing’s Modal and Tencel, and organic cotton and fibers made from recycled materials, such as DuPont’s Sorona and Unifi Manufacturing Inc.’s Repreve polyester and nylon.

The Woolmark Co. was focusing on new ways to present wool at SpinExpo. Roy Kettlewell, global innovations manager for Australian Wool Innovation Ltd., which owns Woolmark Co., said through the Wool Lab, the idea is to help designers develop new ways to create wool products, present them in a fresh light and attract new customers. Among the innovations Kettlewell showed were merino wool blended with precious fibers such as cashmere in retro looks such as twills and herringbones, textured tweeds, wool and silk blends for a “more luxurious feel,” and printed styles and fabrics mixed with embroidery and Lurex for a contemporary flair.

PT Jaba Garmindo, an Indonesian sweater manufacturer, collaborated with Japanese machine maker Shima Seiki and Japanese yarn mill Nikko Textile for a special presentation of computerized design and digital printing capabilities at SpinExpo. Felice Gunawan Beckman, research and development director for Jaba Garmindo, said, “We do a lot of business with many European and Asian brands, and now we want to introduce ourselves to the U.S. market. We want to provide more design services and help brands be more innovative.”

A first-time exhibitor at PV Preview was Italian maker Alcantara, which was using the venue to kick-start its marketing in the U.S. Alcantara showed a selection of its novelty materials and garments designed by Aquilano.Rimondi. The collection includes techniques like electro-welding, pleating, embroidery, laser engraving, digital printing, quilting, embossing and resinating used in sectors such as fashion and accessories, automotive, interior design and home decor. The firm boasts Carbon Neutral certification from TÜV SÜD.

Sandrine Bernard, executive vice president of Solstiss USA, said, “We have seen more people and taken orders from buyers from Canada, Brazil, Mexico and the West Coast, so that’s a new trend.” She said U.S. business has been strong, and business from France and Italy is getting better.

Liberty Art Fabrics’ booth was bustling, and Michelle Lora, key account executive, said interest was being expressed for Liberty’s printed cottons and silks, as well as new looks in printed nylon and gabardine, and digital prints in fresh-looking florals, geometrics and conversationals.