The Beaugrenelle center aims to draw 12 million visitors per year. 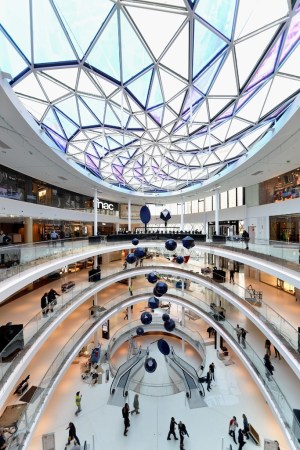 PARIS — A new upscale shopping mall on the banks of the Seine River hopes to draw thousands of tourists from the nearby Eiffel Tower and revitalize the Paris neighborhood where it is located, known for its office towers dating back to the Seventies.

Philippe Depoux, chief executive officer of Gecina, the listed real estate investment trust that owns a 75 percent stake in the project, said it cost 500 million euros, or $683.75 million, and was the largest opening of its kind in the French capital since Italie 2 in 1976 and the Forum des Halles in 1979.

“Deliveries of this scale happen not even every 10 years, but rather every 30 years, so it is an absolutely exceptional operation,” he said.

The mall hopes to draw 12 million visitors a year initially, rising to 15 million once it hits “cruise speed,” Depoux said.

Now that the project is complete, Gecina — which also owns the building housing the flagship Louis Vuitton store on the Avenue des Champs-Élysées — intends to sell its stake in Beaugrenelle in order to focus on its core segment of offices, said Bernard Michel, chairman of the firm.

However, he declined to comment on media reports that potential buyers include Chinese sovereign wealth fund State Administration of Foreign Exchange.

“It’s an ongoing operation with a certain number of investors expressing interest. These investors are either funds or operators in the shopping-center sector,” Michel said. “Given our new strategy, we do not want to keep this project in our portfolio.”

Beaugrenelle expects to draw a large proportion of tourists visiting the Eiffel Tower, which attracts seven million visitors a year, of which two-thirds are foreign. A free boat shuttle service will link the landmark to the shopping center in around 10 minutes.

It houses a 10-screen Pathé cinema designed by Ora-Ito, alongside a plethora of hip eateries that will or have opened overlooking the river, including Eclectic, a Seventies-style brasserie designed by Tom Dixon that is the brainchild of Philippe et Fabienne Amzalak, the duo behind Ma Cocotte and Bon.

Its two main buildings, B Magnetic for shopping and B Panoramic for entertainment, are linked by a glass walkway covered in a metallic grid that allows light to stream through. The atrium of the B Magnetic building features a mobile by French contemporary artist Xavier Veilhan.

The roofs of both buildings are covered with more than 75,000 square feet of vegetation and include a community garden and six beehives.