Taylor, who was vice president and divisional merchandise manager for women’s apparel at Rack, succeeds Michael Wolkoff, who held the post for the last five and a half years and has left Century 21.

Century 21 said that Taylor will direct the company’s buying and merchandising activities and develop strategies to increase profits and provide value for customers. She will report to Isaac “I.G.” Gindi, co-chief executive officer of the family-run off-price retailer. Taylor has also joined the company’s executive committee.

Century 21 said that at Nordstrom Rack, Taylor was responsible for women’s merchandising at the Rack locations in the U.S. and Canada, and Rack’s significant online business.

Earlier in her career, Taylor worked as a Macy’s store manager and held roles in merchandising and planning for Nordstrom’s full-line business.

“Molly has a true passion for people, product and an understanding of how to build off-price businesses,” said Gindi. She has a wealth of expertise in the areas of merchandising, customer experience, omnichannel and team leadership that will be incredibly important in the growth and expansion of the Century 21 Stores retail experience.” 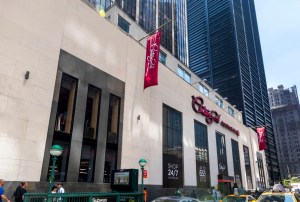 The 55-year-old Century 21 Stores differentiates itself from other off-pricers such as TJ Maxx and Burlington Stores, by offering a more extensive offering of upscale and designer brands in department store-like settings. Men’s, women’s and children’s apparel, footwear, outerwear, lingerie and accessories, along with beauty and home goods are offered, at up to 65 percent off regular prices.

Century 21 has been expanding on the East Coast. Its next big move is to open a 60,000-square-foot unit in the American Dream retail and entertainment complex under construction in East Rutherford, N.J., and expected to open in the fall.

Century has been steadily but cautiously expanding in recent years, opening in downtown Brooklyn and Florida as well as launching pop-ups and testing smaller formats.

Century 21 has stepped up its marketing and approach to social media. Last July, the company hired its first chief marketing officer, Michael Kustermann, who has a strong background in the coffee business and innovating the customer experience, having worked at Starbucks and Nespresso.

The 15-unit, off-price retail chain is headquartered in lower Manhattan, where it has its flagship at 22 Cortlandt Street. For many years, it’s been among the busiest retail destinations in the city, attracting locals and tourists. The company also operates the c21stores.com web site.