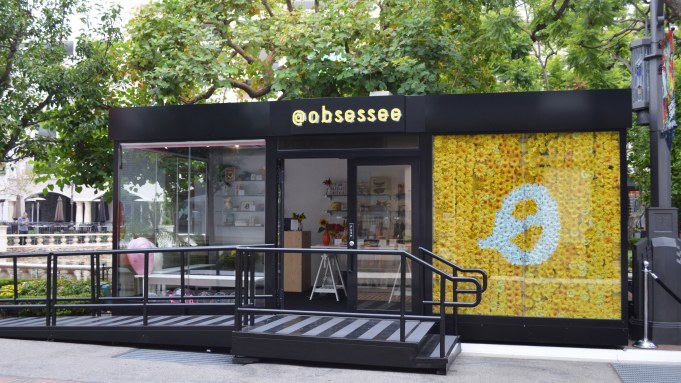 Social media content maker Obsessee goes to the mall today with a three-day pop-up at The Grove as it tests its following’s appetite for real-world experiences.

The 200-square-foot space, located near the future home of the incoming Elizabeth and James store, is not traditional retail in the sense that if a customer wants to purchase an item, they do so not with cash or credit but by posting on places such as Instagram or Twitter. There will also be a swirl of activity packed into the short stint at The Grove, including astrology readings, a photo booth, kitten bar and denim customization.

It’s a fitting store format for the Generation Z-minded brand, which produces content distributed only through social media platforms such as Snapchat, Facebook and Instagram. Obsessee launched this year as part of Clique Media Group, which also owns WhoWhatWear, Byrdie and MyDomaine.

Eleven brands, including Obsessee, will have product in the store. The mix includes jean jackets from Old Navy, Swatch watches and notebooks and other items from L.A. gift and accessory company Ban.do.

Despite the general thinking that Millennials and younger generations are averse to real-world shopping experiences, what Obsessee executives have seen so far from their followers actually speaks to the opposite thinking given the subtle differences now emerging between Millennials and Generation Z.

“I think one of the things that really stood out to us was this idea that [Generation Z] want to connect in real life,” Power said. “Millennials have been a generation that are sort of socially connected through social media and this group that’s a bit younger actually craves to go to the mall with friends….The mobile phone is maybe not so much of a novelty to them.”

Obsessee followers could very well see more real-world experiences as time goes on, based on the data and observations gleaned thus far since its launch.

“We definitely believe that there is huge potential for Obsessee to live on as products and as a brand with tangible goods,” Power said. “I’m not sure what the platform will be — if it will be brick-and-mortar stores or if it will be something that’s digital.”

That could mean experiences that pop up in different parts of the country or it could mean a permanent space, Power added.