The flagship will open on Sept. 22 — just in time for fashion week.

MILAN — It eventually happened: Off-White is ready to open its first store in Milan.

So far the brand, which boasts a cult following especially among Millennials and Gen Z customers here, was available through the wholesale channel as well as at a dedicated corner at the Rinascente department store.

Now it will add a new, two-storied home to its retail network, nestled on the corner of Via Verri and Via Bigli, a few steps from the city’s renowned Golden Triangle luxury shopping district. The banner will officially open on Tuesday, just in time for Milan Fashion Week.

Half of the 4,305-square-foot space will showcase the men’s wear and women’s wear collections. 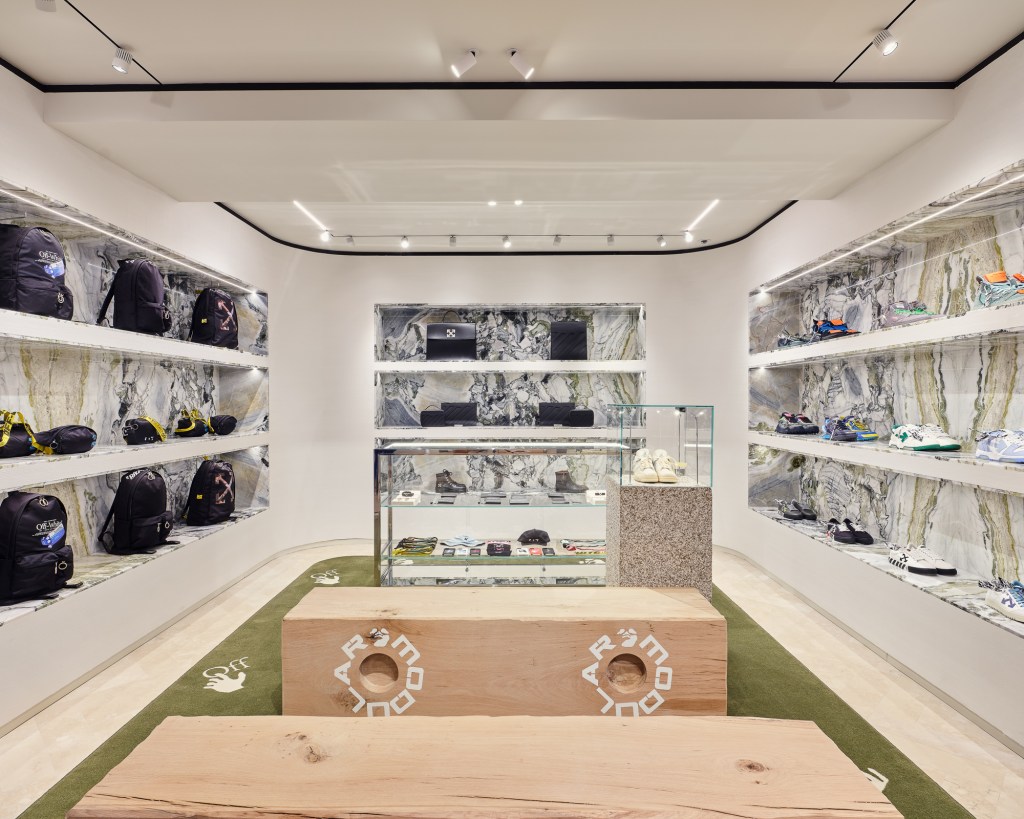 “After 59 stores opened across the globe, Milan was a must for the brand,” said Andrea Grilli, chief commercial officer of New Guards Group and chief executive officer of the brands of the company, which is the licensee of Off-White.

“Although we had to postpone the project during the pandemic, we decided to confirm it and open the store as soon as possible. Milan gave a lot to the brand and now is the perfect time to concretely show how much we believe in the restart of our city by bringing new and positive energy,” added Grilli.

One of the Italian cities most affected by the pandemic, Milan already hosts the design studio and manufacturing of the label, which was established by Virgil Abloh in 2013.

“I think it’s important to not let difficult moments in life stop dreaming and [the] development forward,” added creative director Abloh, who also holds the role of artistic director of men’s wear at Louis Vuitton. “These times must make us stronger and not discourage from achieving goals.” 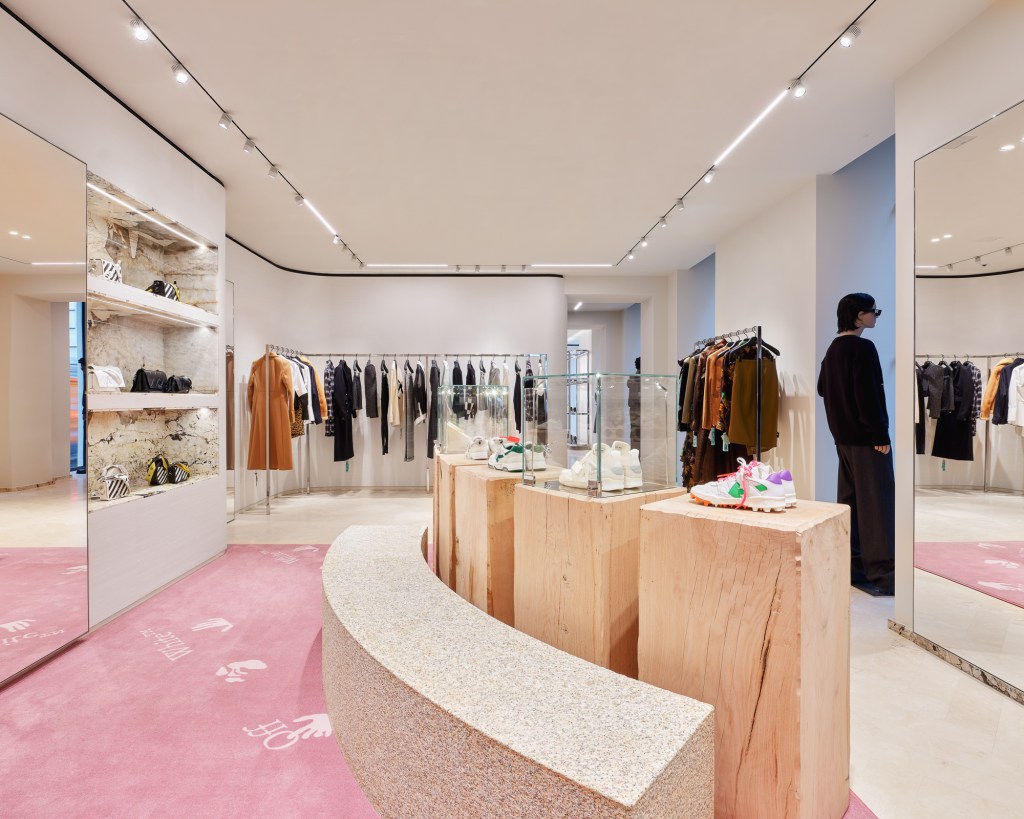 Overall, curved walls connect the different rooms and convey fluidity to the space, which is enhanced by a sinuous staircase leading to the second floor, which is dedicated to men’s wear collections. Here, emerald marble niches, geometric wooden benches and green rugs replicate the main design staples of the store, while granite plinths are added to showcase men’s accessories.

Also on the second floor, a room dedicated to Off-White’s homeware line is dominated by wooden furniture paying tribute to the brand’s “Meteor” pattern, resulting in an eye-catching effect. 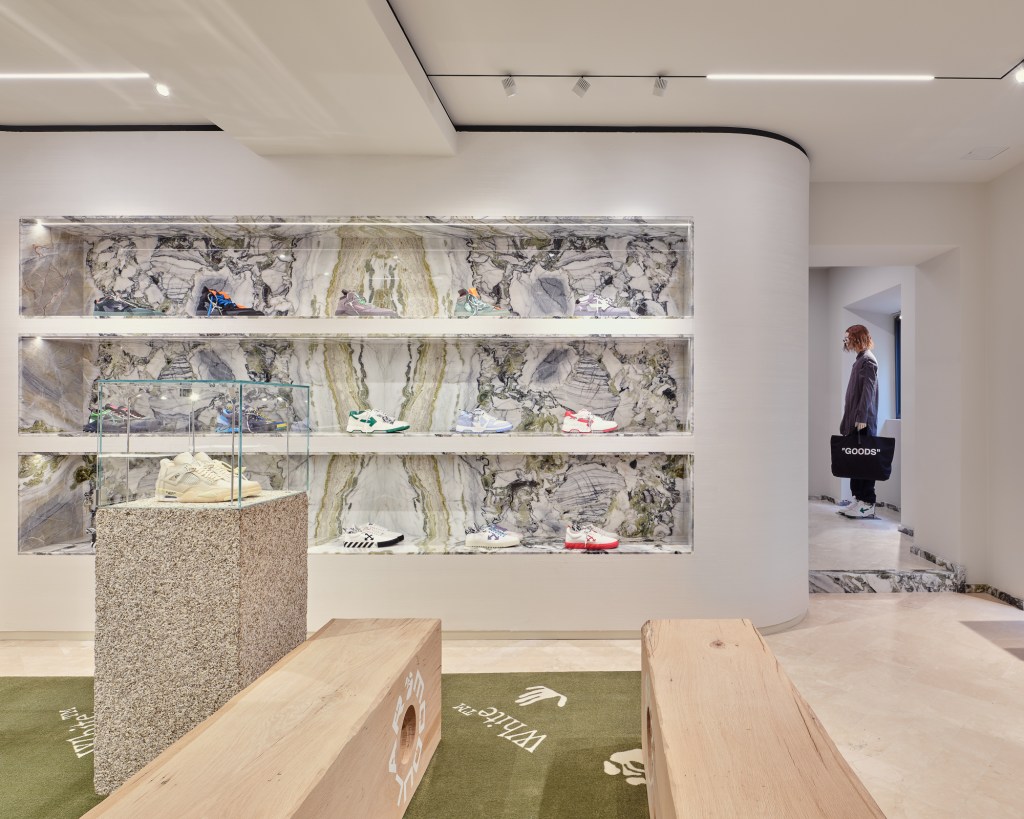 Despite the current, challenging times for physical retail, the company is banking big on brick-and-mortar stores as this is the third unit Off-White has launched recently.

Last month, a two-storied flagship was unveiled in Miami. Located in the city’s dynamic Design District, the space was designed by Abloh and AMO, the research and design branch of architecture firm OMA led by Samir Bantal. This collaboration built on the ongoing conversation between the two parties, which sparked when they jointly developed the “Figures of Speech” exhibition devoted to Abloh’s work held at the Museum of Contemporary Art Chicago in 2019. 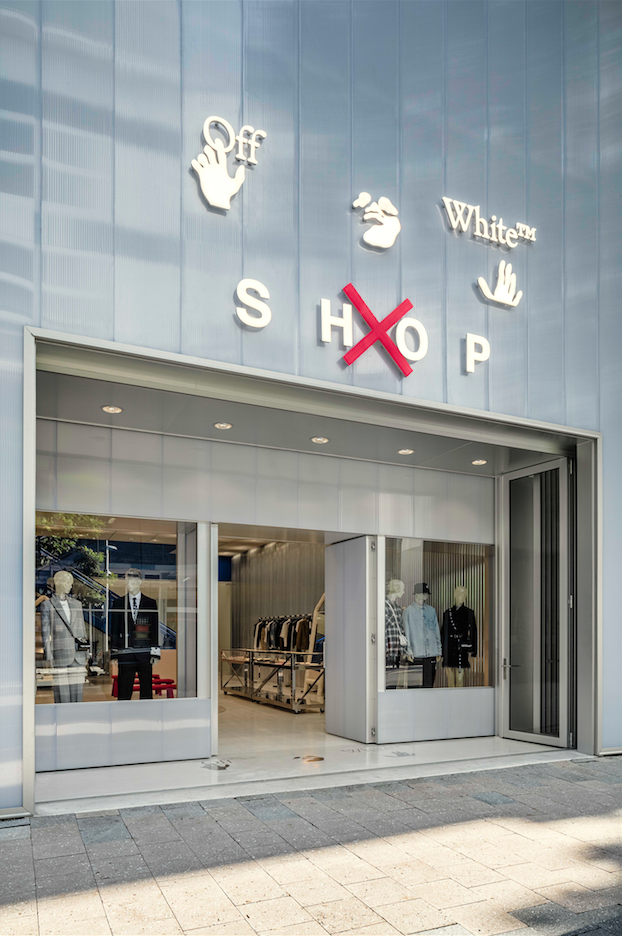 Infused with an industrial aesthetic and exploring the idea of the modern fulfillment center, the store design features modular and flexible elements as the space is intended to echo Abloh’s multidisciplinary engagement by hosting different activities, such as public art display, mini catwalks and musical performances.

For instance, a floor to ceiling movable wall serves as a secondary façade that can be pushed back inviting the public into the brand’s perimeter for these purposes. In addition, the main polycarbonate façade not only carries the brand’s logo, but also a bright orange “X” overlaying the word “shop” to further signal that the space is more than a store. 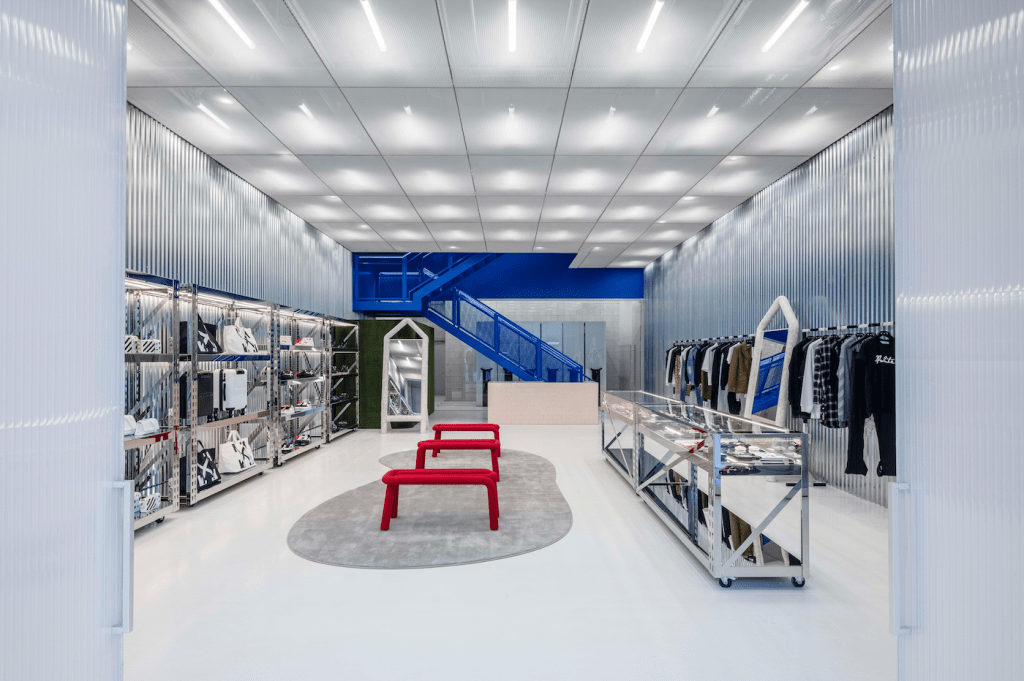 Inside Off-White’s store in Miami.  Kris Tamburello/Courtesy of Off-White

Inside, furniture comes with wheels for easier rearrangement, while customizable elements and transformative fixtures enable the retail floor to change appearance rapidly in accordance with event programming, product releases and capsule collection drops. 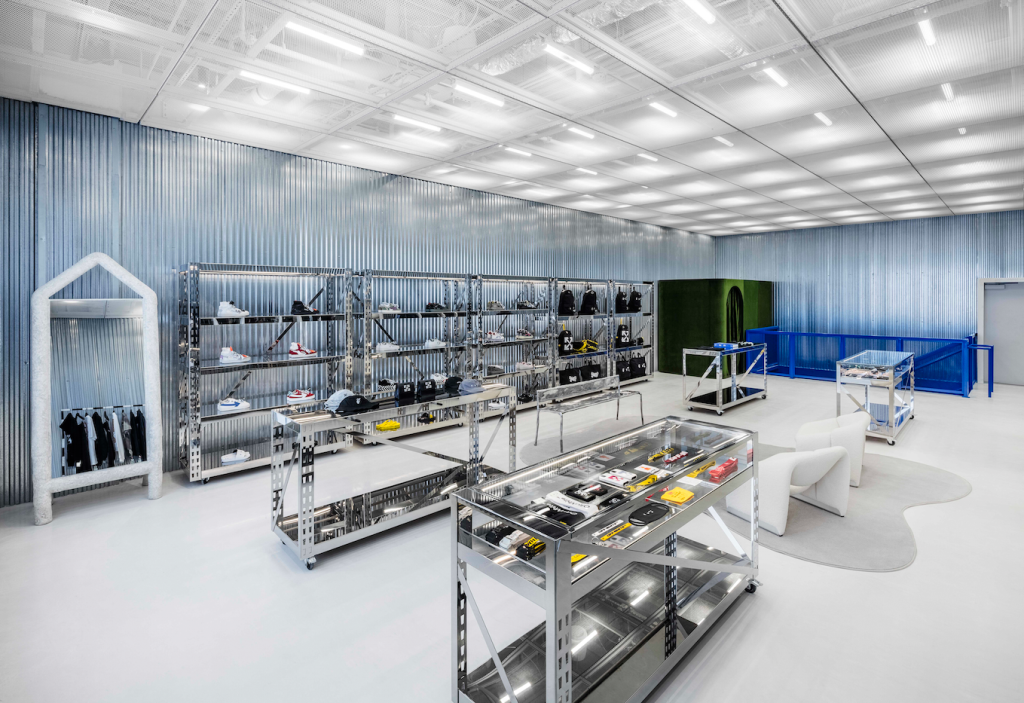 Inside Off-White’s store in Miami.  Kris Tamburello/Courtesy of Off-White

In particular, a series of displays with geometric plinths conceived by Parr and inspired by Brancusi sculptures and brutalist architectural design stand at the center of the space. The motif is replicated throughout the shop in the details of the racks and in the seating area.

The company said another opening is in the pipeline for 2020, with a monobrand store is expected to be unveiled in Singapore’s Marina Bay Sands in November. 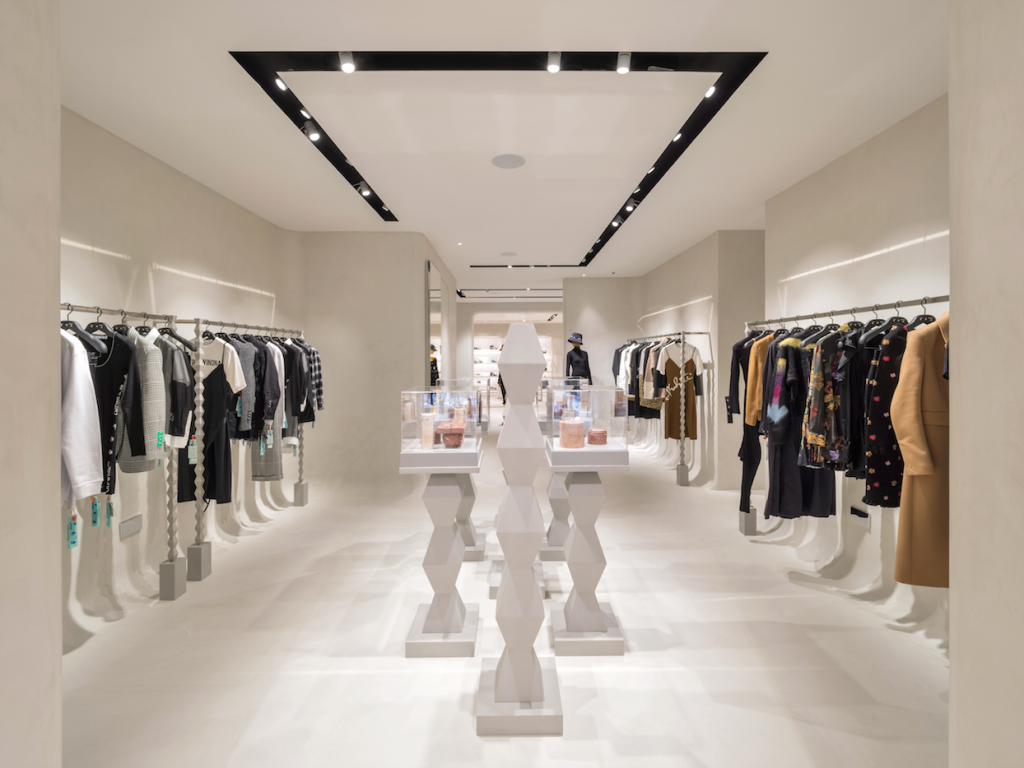 Inside Off-White’s store in London.  Courtesy of Off-White

As reported, earlier this year New Guards Group revealed to WWD that Off-White will adopt a new calendar of product deliveries, more in sync with the seasons. In particular, the brand — a fixture in Paris — will skip Paris Fashion Week this fall and will kick off its course in January with the spring 2021 season, a collection that will be launched in stores in February.

At the time, Grilli said the move will represent “a boost for the distribution, precisely because it will focus on the final consumer. Reducing from four months to one month the interval between the unveiling of a product and its availability in stores will increase curiosity” and “will increase the engagement of consumers rather than the boredom.”