Inside the Redemption flagship in New York

The 4,000-square-foot store, opening its doors Oct. 17, is located on Wooster Street in the heart of the SoHo district.

“We decided to open our first store in New York because the United States is our biggest market, accounting 50 percent of our business,” Moratti said. “We opted for SoHo for two main reasons: it’s more affordable than Madison and at the same it better reflects our positioning in the market.”

For the brand’s first retail venture, Moratti decided to assign the project to a high-profile personality, Luca Guadagnino, who, along with directing cult movies, also operates the Studio Luca Guadagnino architecture firm in New York.

“Luca and I have been friends for 10 years. When he started working in the interiors business, he proposed we collaborate and I immediately agreed,” Moratti explained. “I think that Luca has an unparalleled ability to convey emotions through inanimate objects, as he demonstrated with his movies. He is really an incredible art director. He was able to perfectly interpret the spirit of Redemption and translate it into a highly peculiar space.”

In keeping with the rock ‘n’ roll spirit of the luxury brand, the leading inspiration for the creation of the store concept came from images of The Rolling Stones while recording an album in the South of France in the Seventies.

“We conjured up the flair of rock ‘n’ roll that melds with this timeless elegance of interiors. We came up with the idea of a boudoir apartment that for the customer communicates an intimacy in the experience, the interiors are embracing and soft,” said Guadagnino, who decorated the space with soft sofas, lofty ceilings and wooden floors in chevron patterns. “It’s a beautiful process, discovering which of the elements need to shine, it’s a continual process and we reached the end very proud of what we have done, we have crystallized the essence of the brand.”

The French Riviera-meets-New York City atmosphere was also conveyed through a magnificent, large entrance enriched with a glass chandelier, a 3-D crossed pattern ceiling and a checkered floor.

“I wanted this flagship to be different from the average luxury fashion store. I wanted it to be a place where people wanted to hang out and enjoy a pleasant experience,” said Moratti, especially referring to the store’s central hub, designed like a lounge room with sofas and books on the shelves. 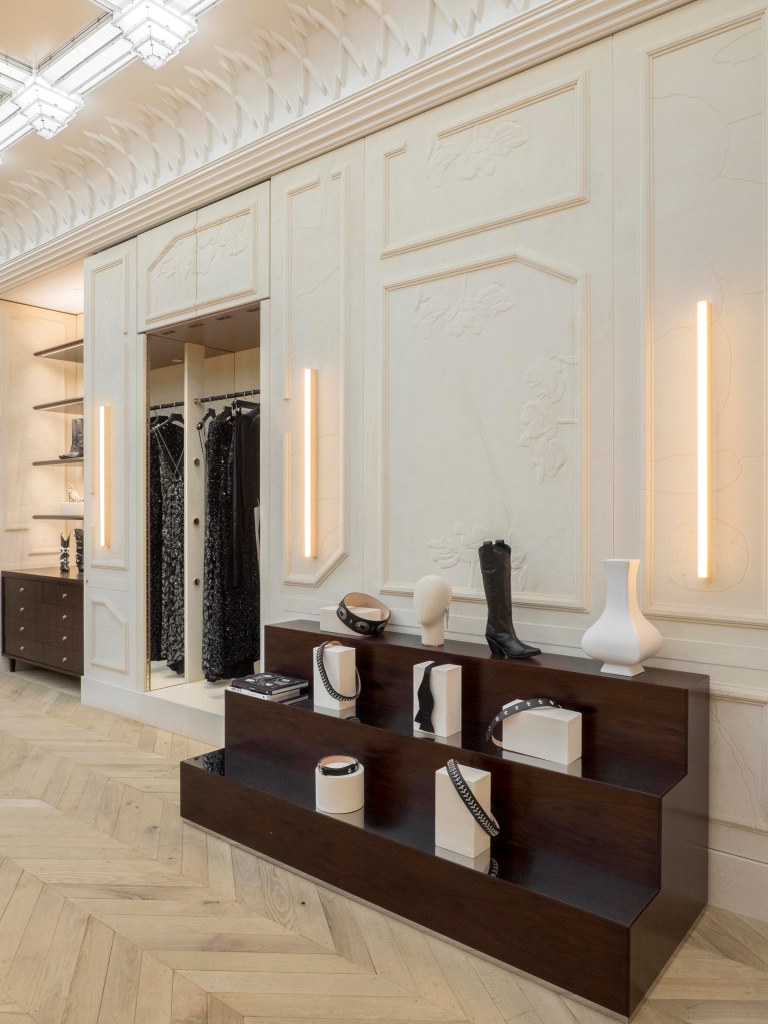 Inside the Redemption flagship in New York  Courtesy Photo

Asked about future retail plans, Moratti said the brand is evaluating other locations. “We want to be cautious and we want to be really ready for the next step,” he said, adding that Redemption has recently improved its online store, formerly focused on the U.S., to cover global markets.

Business and ethics are deeply linked in the Redemption philosophy, which is making big steps to become more and more sustainable.

The company — which, as its founder decided from the launch, will donate 50 percent of its profits as soon as it will surpass break-even price — has introduced in its collections the use of vegan leather, recycled Lycra for swimwear, organic cotton and certified silk.

In addition, Moratti is developing collaborations with developing countries to define “a new model of outsourcing niche expertise,” he said. “We want to contribute to the creation of a virtuous cycle bringing prosperity where it’s needed.”

For Moratti, embracing new visions and models should not be considered an option, but a necessity. “If we all don’t change the paradigms of entrepreneurship, consequences will be highly negative for humanity,” he said.