Prada's collection, made from Econyl, will mark the launch of Project Earth, new sustainability initiative, at Selfridges.

Prada Re-Nylon to make its debut at Selfridges' Corner shop.

The Prada Re-Nylon collection, which employs Econyl recycled nylon yarn, will be released globally in mid-September. While Prada unveiled the Re-Nylon bags last year, this is the first time that ready-to-wear, accessories and shoes — as well as bags — are in the mix.

Econyl is obtained by regenerating plastic waste from oceans, fishing nets and textile fibers, which can be recycled infinitely with no loss of quality.

Project Earth is Selfridges’ major new sustainability initiative, the details of which are set to be unveiled next week. 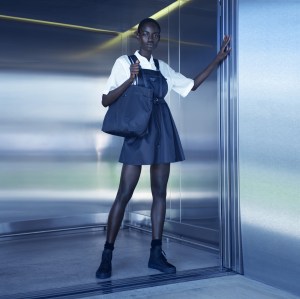 Project Earth is Selfridges’ latest initiative in the environmental and conservation space. In 2011, the retailer set up a longstanding partnership, known as Project Ocean, with the Zoological Society of London. The ongoing initiative aims to raise awareness and to help protect the oceans from over-fishing.

Prada’s new space at the Corner Shop will feature short movies produced by National Geographic that will be displayed in sync on multiscreen large-scale arches.

In addition, all surfaces will be covered with video wallpaper, with macro animations of natural elements and of the Re-Nylon industrial process.

All of the video content will be in black-and-white in a nod to Prada’s signature black nylon accessories.

The collection includes classic Prada shapes, and full men’s and women’s rtw collections, all made from the regenerated nylon.

Re-Nylon first launched in June 2019 with a one-off collection of six bags for men and women.

Sebastian Manes, Selfridges executive buying and merchandising director, said the Prada project will “bring circularity to life” inside the Corner Shop and called the concept unique, adding that it was developed specifically for Project Earth.

Last year was a significant one for Prada in terms of sustainability.

Among the highlights, the group created a Diversity and Inclusion Advisory Council; revealed it was banning fur; launched Re-Nylon; released its first sustainability policy; held its third sustainability conference, “Shaping the Future,” and was a signatory of the Fashion Pact.

Earlier this year the company inked a second sustainability-linked loan with the Milan branch of Mizuho Bank Ltd. This follows one signed last year with Crédit Agricole for 50 million euros. The targets tied to the loan relate to the number of Prada Group stores assigned a LEED Gold or Platinum Certification, the number of training hours for group employees and the use of regenerated nylon for the production of goods, according to the company.