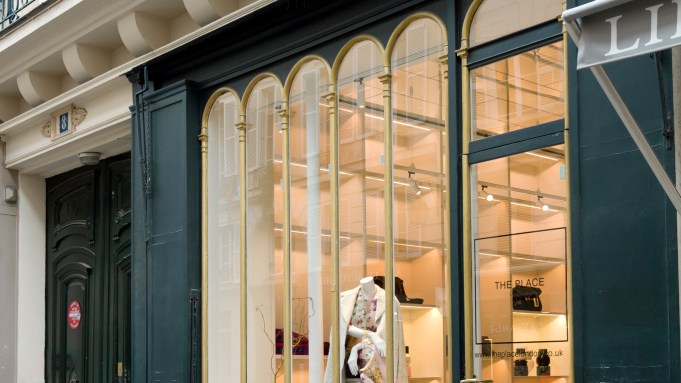 PARIS — Britain’s Brexit tragicomedy may be reaching its climax, with businesses up and down the country terrified of what might happen to international trade, but that hasn’t stopped Simon Burstein from taking his retail concept, The Place London, into new territory.

The Place London, which already has three sites in the British capital, on Connaught Street and in Mayfair, opened earlier this week at 8 Rue de l’Odéon in Paris, not far from the Odéon Theatre in Saint-Germain-des-Prés.

The opening of the bijou store, which spans 400 square feet, marks the relaunch of Seventies cult brand Newman jeans, known for its brightly colored velvet trousers and jackets. Burstein tracked down the label’s owners and secured the exclusive worldwide license for the brand he recalls from his youth.

The flared, five-pocket jeans come in six colors including hot pink, cobalt, berry and black, and are stacked on shelves alongside The Perfumer’s Story fragrances, Loulou de la Falaise jewelry, bags by Celine Lefebure and vases by Marie-Victoire Winckler.

The store’s fashion offer includes ready-to-wear by Britain’s Alice Archer, the Ukranian label Poustovit, French designer Sofie D’Hoore, and Lee Matthews, a collection that hails from Australia. Hanging on a rail at the back of the store by the dressing room are artfully patched and embroidered Dobryakova jeans.

The store also carries leather-bound books by Leathersmith, a leather and stationery brand and British bindery that Burstein purchased in 2015. His aim is to turn it into a lifestyle label focused on craftsmanship.

Burstein said he wanted to replicate the offer at The Place London on Connaught Street, and introduce brands that he loves, such as Alice Archer, to new markets. “It’s another ‘chapitre’ for The Place. Although this is identical to the London stores, every city is different,” said Burstein during a walk-through of the cozy shop with its wooden floors, warm lighting and double-height windows that face the narrow street.

The opening is a homecoming of sorts for Burstein, who has been Channel-hopping for years, running multi- and mono-brand stores at various points in London and in Paris, and spending family time in both cities. In the Eighties, he launched Filofax in France through his paper and stationery store Le Jour et L’Heure, which was also in Saint-Germain-des-Près.

Asked to compare the two cities from a retailer’s point of view, he argued that “Paris is much more local, rents are more affordable, and the high street doesn’t really exist,” said Burstein, adding the owner of the Paris building lives upstairs, and the property has been in her family for centuries. By comparison, retail properties in London are often owned by institutional investors or historic estates and managed by a network of agents, with rents and taxes on a constant upward spiral.

Burstein founded the multi-brand retailer Browns in 1970 with his parents, Joan and Sidney Burstein. That retailer, now a division of Farfetch, made its name taking risks on the likes of John Galliano, Alexander McQueen and Hussein Chalayan when they were still students and by introducing once-emerging labels such as Missoni and Ralph Lauren to the U.K.

That spirit of discovery — and risk-taking — is still Burstein’s blood, which is why he’s so enthusiastic about reviving Newman. “It was the success of Browns in the pre-Burstein days,” he said, adding that he got to know the label when he was working as a Saturday boy at the store. The Newman jeans and jackets, for men and women, will be sold at The Place London stores and online. They’re priced at 220 pounds, or 250 euros, per pair.

Burstein isn’t stopping at Paris. He said he’d like to take The Place London to New York as well, and argues “there is great opportunity in retail right now.”

He said he’s committed to hunting down and promoting small brands that might not have big profiles beyond their founders’ native countries. “I won’t carry any big brands — I’ve done that already. For me, it’s about finding people and emerging brands, and giving them an opportunity to grow. And I want to offer an interesting mix, a beautiful environment and great service.”

Shoppers can also buy online at the The Place London’s French web site. Products are priced in euros, and will be shipped from the U.K., with an in-store click-and-collect service.

Despite the Brexit uncertainty, the crisis in brick-and-mortar retail in the U.S. and the U.K. and the gilets jaunes protests in Paris, Burstein said he isn’t looking back.

“This shop is so special,” he said. “I love the neighborhood, and it’s a wonderful way of meeting people and getting their feedback. I’m all for having people discover, come in and have a nice time — or buy online. I’m here to do business.”