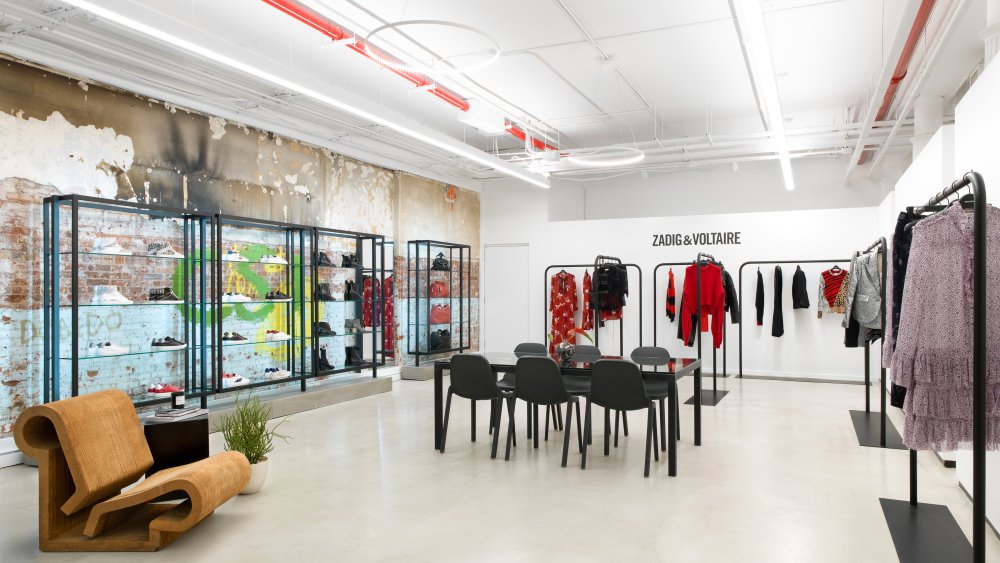 Zadig & Voltaire is looking for a new minority investor as it aims to double the brand’s sales.

Just past the two-decade mark since the company’s birth, Thierry Gillier, founder and chairman of the French contemporary brand, said he and existing 30 percent shareholder TA Associates have mandated Rothschild & Cie to find a new investor to help usher Zadig & Voltaire into its next phase.

“It’s not just about needing capital; it’s about needing strategic support,” Gillier said via Skype from Paris. “We’re a real new brand and there’s not so many of them outside of what you have in the luxury market. We want to have the right people to achieve the next step, someone who shares our vision. The key is that the next partner needs to be a good strategic fit.”

Gillier declined to disclose the size of the investment he’s seeking, but said he has big plans for Zadig & Voltaire, including doubling the brand’s annual sales volume to 500 million euros in four to five years.

“We have so much growth, we’re not thinking of an initial public offering,” Gillier said. “An IPO is talking to the market. Maybe we’d think of an IPO, but not these days. In five years, maybe.”

U.S.-based private equity and buyout firm TA Associates became a minority shareholder in 2012 when it acquired its 30 percent stake in the brand in a mezzanine investment worth 180 million euros, or $235 million. “There’s currently a landlord and minority shareholder,” Gillier said. “We’re looking for someone that will bring strengths — it could be technology or production knowhow — to the company and understands what we’ll become in 10 years.”

The deal is expected to be completed by the end of the year. Asked if he’ll look for an investor in China, Gillier said, “Yes, why not.” The Zadig & Voltaire chairman is aggressively pursuing growth in Asia, particularly China, with a midterm target to have one in every two customers come from either Asia or the Americas within five years. Two-thirds of the brand’s sales are done outside of France, in 40 countries.

“We don’t want a multibrand partner,” Gillier said. “We know we’ll have a lot of interest.”

Sources expect financial and trade buyers given the mergers and acquisitions market in the affordable luxury space is now buoyant as opportunities to invest in high quality brands are scarce. The growth opportunity for the brand in China could also attract investors from there.

Added Christopher Tate, general manager of Zadig & Voltaire U.S.: “Zadig & Voltaire is not a brand built by a large group [such as LVMH or Kering]. It’s an authentic brand. There’s fewer brands like ours in the market and there aren’t many with this kind of global footprint. It’s taken 20 years to build this. I don’t think there will be many more brands like this because the world has changed so much.”

One reason for that is the brand’s positioning, which comes from Gillier’s passion for art and large collection and the way he infuses that into the stores. During the Skype interview, he sat in his Paris office in front of a floor-to-ceiling multimedia painting on the wall, which he matter-of-factly identified as a work by Robert Rauschenberg.

An art program and traveling gallery rolled out to key stores this year after being piloted at Zadig & Voltaire’s 16-month-old unit at 453 Broome Street in Manhattan’s SoHo. For the store’s opening, Gillier, who worked at Christie’s before starting Zadig & Voltaire, provided “Untitled No. 2,” 2015, by Dario Escobar, which is made from beams with carved-out areas in which basketballs are suspended; Will Boone’s “Mercy Seat II,” 2014, a bench, and Eva Rothschild’s “Snowman,” 2013, a sculpture made from polyurethane resin and plaster paint.

Several locations feature installations, such as the Dan Graham “Tunnel of Love” at the Brussels flagship.

Zadig & Voltaire has “strong DNA and today we’re working more on that,” Gillier said, citing the brand’s rocker chic sensibility, which includes symbols such as a death’s head, fallen angel, butterfly, crown, wolf’s head and angel wings, and product details such as exposed seams, elbow patches and zippers. The brand has made inroads with celebrities and influencers. “A lot of people at Coachella were wearing our products,” Gillier said. “We hosted a pre-Coachella styling session at our Melrose Avenue store.”

The U.S. is already Zadig & Voltaire’s second-largest market after France, and clearly a growth engine, with 2018 sales more than 60 percent ahead of last year. U.S. sales volume has tripled in the past three years, said Tate.

There are 55 stores and department store concessions in North America and Zadig & Voltaire unveiled 17 stores in the U.S. within the last 12 months. “We’re already committed to another six leases and we’re actively looking in San Francisco, Miami and other parts of Florida,” Tate  said. “We’ll add one to two more stores in New York over time. A few years ago we opened our store on Madison Avenue. It’s doing so well. People are connecting to our values. It was a real challenge, but we carry something different. People are dressing differently today.”

Men’s wear, which was for all intents and purposes relaunched in the U.S., is posting outsized growth of nearly 300 percent. The brand operates nine men’s shop-in-shops within its stores. The first example of a new men’s-only retail concept will bow next month at 104 Grand Street in Manhattan’s SoHo, followed by a second men’s-only unit on Melrose Avenue in Los Angeles.

“Korea is a big market for us,” Gillier said. “It’s the biggest and longest market we’ve been in behind America. Korea has been a big success. We have six shops in China.  We’re working on finding a major location in London and opening shop-in-shops for handbags.”

Zadig & Voltaire remains focused on achieving strong digital growth, which is trending 50 percent ahead year-over-year for 2018 year-to-date. The brand plans to enhance its omnichannel customer proposition with a relaunch of the global web site, which is planned for later this year. Digital now accounts for 9 percent of sales and Gillier wants that number to reach 20 percent in five years. Growth is coming from the U.S., where digital sales were up 138 percent year-to-date in fiscal 2018. The U.S. is leading the site’s redevelopment with American technology, he said.

Zadig & Voltaire staged the brand’s inaugural New York Fashion Week runway show during the most recent installment in February. “The show was very important,” Gillier said. “Fashion shows are talking to millions of people and give us the opportunity to talk to those millions.”

Gillier said Zadig & Voltaire will sit out NYFW in the fall for the Paris launch of the brand’s second fragrance, developed in partnership with Shiseido. “We might do a big runway show in Paris this fall. After that, we want to continue with New York Fashion Week,” he said, adding that he plans to pursue the development of additional fragrances, following the success of 2016’s This Is Her and This Is Him scents.

Handbags, accessories and shoes are categories Zadig & Voltaire will mine. Sneakers have been especially popular, including the ZV1747 Nash with Western-style cutouts and stud motif, $328, and  ZV1747V Dream Sneakers with a sparkle finish and metallic heel, $368. Footwear and handbag sales are ahead more than 50 percent over last year. Gillier said single-category retail concepts are under consideration, adding, “Today, we’re doing many stand-alones.”

A number of flagships that opened in Europe are contributing to the lifestyle positioning and overall brand awareness of Zadig & Voltaire, Gillier said, citing the 9,150-square-foot Rue Cambon flagship in Paris that bowed at the end of last year which mixes fashion and contemporary art.

The Rue de Cambon unit features a dedicated art gallery on the lower level, which has exhibited paintings by Richard Serra, Julian Schnabel and Adam McEwen. “It’s really about engaging with consumers,” Tate said. “We’re looking for similar opportunities in the U.S. — freestanding gallery or pop-up galleries. I’m interested in doing more art installations that are affiliated with the brand.

“The art tends to be the centerpiece,” Tate said. “We just acquired a new Jenny Holtzer piece at auction that was in the original Helmut Lang store in SoHo. It will be one of the most photographed works.”