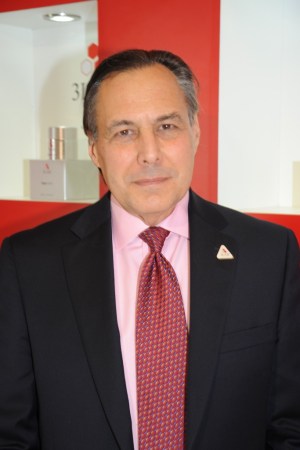 CANNES, France — For many, TFWA has become a venue of luxury brands, some of which are small, domestic players.

“It’s the premier luxury brand exhibition, and we have had meeting with domestic retailers as well as our distributors,” explained Spencer Kanis, president of 3Lab, which had exhibited at the show three times prior and currently sells in 13 markets through 300 sales points worldwide.

“We are here actually looking for more countries to get in to,” explained Erica Chung, 3Lab’s creator and cofounder, who added the company was presenting its Super Cream, which retails for $875 in the U.S.

It is highly possible 3Lab products could enter travel retail in the next few years, according to its executives.

“It’s all a matter of building the brand recognition,” said Kanis.

Celso Fadelli, chief executive officer of Intertrade Europe Group, a distributor specializing in what he calls “art perfumery,” doesn’t discount entering travel retail at some point, either. He’s been attending TFWA as an exhibitor for approximately five years.

“I believe all of the most important players are here,” he said. “We are keeping contacts. The market is growing and changing in a more [qualitative] direction.”

He noted some airports, such as Heathrow Terminal 5, are beginning to dedicate areas to such scents. However, a focus right now for Intertrade is developing an Internet presence for its brands.

Also with a growing focus on niche scents is Aspects Beauty, which started up a division concentrated on the segment one year ago. It kicked off the business with a collection of “artisan brands” for Harvey Nichols, according to Jill Hill, managing director of the fragrance distributor.

She sees there could be a market for niche fragrances in travel retail.

“However, the pricing structure is what is going to be the biggest problem for these smaller producers,” she said. “The reason travel retail is affordable for the global giants is because of the critical mass. If travel-retail operators are willing to reduce their margins on artisanal products or have a different kind of trading structure, then I think it would be fantastic, particularly in places like [Heathrow] Terminal 5, where the business traveler and the cognoscenti travel through.”