Standing next to the company’s storied flagship in Rome’s luxury shopping street Via Condotti, the 1,080-square-foot shop is also meant to attract a younger international customer who may want to approach the brand by browsing through its archives at the interactive counter designed like a bar counter, or discover Roman architecture through one of the books on display. “The two stores are designed to be complementary, but the New Curiosity Shop is projected into the 21st century,” said Babin, noting that this is the first time the archives have been open to the public.

While looking into the future, the store is rooted in Bulgari’s past: the brand’s flagship on via Condotti was called the Old Curiosity Shop, a nod to the Charles Dickens novel. The flagship was inaugurated in 1905 by founder Sotirio Bulgari, carrying jewels as well as neo-Hellenic metal buckles, ancient objects with Byzantine motifs or little perfume bottles, for example.

“This says a lot about the founder — he was very innovative, gradually moving away from Greek silverware into Italian high jewelry and selling directly to the customer, while at the time it was usual to go the wholesale route,” explained Babin. “He wanted to attract potential shoppers from the U.K., and triggered their curiosity. Using that word in English was daring; we are talking about more than a century ago, after all. He was very forward thinking and he was aware of who he would sell to. This is more normal now.”

Babin contended that the new store is “less intimidating, it’s like a meeting place.”

The space previously housed an independent jeweler and when it became available offered a “once in a lifetime opportunity” for Bulgari to obtain the entire building. Revamping the façade with marble arches similar to the ones outside the storied flagship, “it now looks like Palazzo Bulgari,” he said. “It’s important to introduce ourselves not only with the collections, but also with our own palazzo, in the place where everything started; it’s the home and workshop of the family. The architecture with the marble arch suggests that it is Bulgari, there is harmony, but then people are surprised because it’s so different, more informal.” 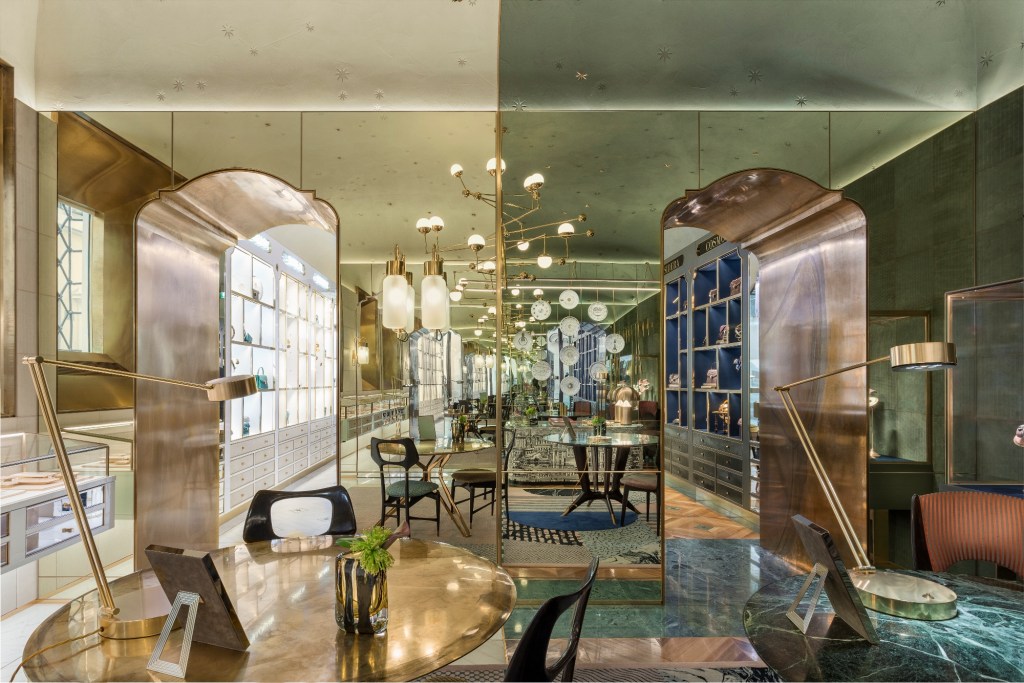 While the flagship is designed by Bulgari’s go-to architect Peter Marino, the New Curiosity Shop was conceived by Silvia Schwarzer, the brand’s senior director of interior design. Among the standout pieces, a modern Venini chandelier; a unique Thirties restored Guglielmo Ulrich table; a Fornasetti wooden hand-lacquered sideboard with four mirrors, and gold and china plates with an astronomical theme; a patchwork of suede swatches stitched by hand onto the walls, and a brass chandelier reproducing a constellation. A window is covered with the word “Curiosity” with a peephole.

“We wanted to develop a new store concept that is more informal and would resonate in a closer way with a younger generation. The staff is also made up of Millennials, who are more spontaneous and trained in a different way — they don’t immediately rush on you. The fact that you can browse freely is much appreciated,” observed Babin.

“I myself am not a Millennial, but I like how fresh it feels and its sense of freedom,” he added with a laugh.

While the company officially unveiled the store with a two-day event this week, the location opened in December and Babin said “the traffic has been high and not driven by a logo, as it has not been placed on the façade yet.”

Asked if the format could be replicated elsewhere, Babin said the concept is “pretty global and it’s a showcase for other stores in the world. It would be very interesting, but before thinking of expanding we want ourselves to better understand it.” 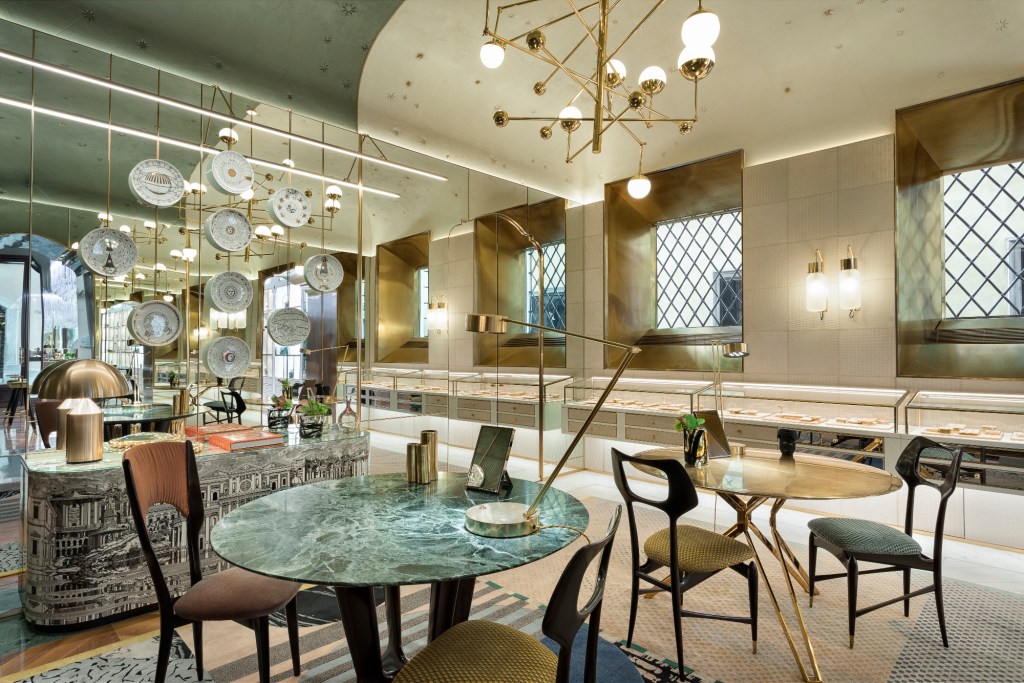 A room in the New Curiosity Shop.

The executive said the store’s design and themes are meant to be changed every six months. “We, too, are influenced by the fast pace of fashion, and even in our institutional store, we tend to change our windows every two months. This shop has to surprise you visit after visit, with additionally creativity. If you come back in six months, it will be markedly different, except for the back room, where there is the customization.”

The first theme is that of Mirabilia and the time when man started to question the nature of the universe, displaying ancient globes, telescopes or maps that contrast with modern projection, satellites and psychedelic lights. A selection of Mirabilia pieces includes the flexible Serpenti bracelets in white gold with diamond pavé and onyx inserts and the Parentesi bracelets in pink gold and jade.

Bulgari also has tuned into the consumer push for greater personalization. The store offers unique products, including a mini collection of Condotti 10 jewelry: Two sets of bracelets with matching rings, one in pink gold and diamonds, the other in pink gold, diamond pavé, and with malachite and mother-of-pearl inserts. Altering circles, squares and eight-branch stars creates a geometry that reinterprets the motif of the floor of the Pantheon temple in Rome. This collection, said Babin, has performed “beyond expectations” and is already out of stock. “We are working to speed up production,” he offered.

There is also a limited edition of 20 pieces of Serpenti Twist Your Time watches, with straps in pink or blue metallic calf leather, created exclusively for the shop. The case in pink gold and diamond pavé surrounds a heart in mother-of-pearl and the engraving Only in Rome is on the back. The Serpenti bag with the hashtag #Roma is also exclusive and in a limited edition of 200 pieces.

Concurrently, the brand on Thursday introduced “Treasures of Rome: A Journey Into Bulgari’s Legacy,” a new book by Vincent Meylan that celebrates the house’s historic jewels and the legendary people who owned them, from actresses Anna Magnani and Gina Lollobrigida to the Infanta Beatriz of Spain; the American ambassador to Italy Clare Booth Luce; heiress Barbara Hutton, and Countess Dorothy Dentice di Frasso. In a link to the latter, the book was presented at the stunning, frescoed 16th-century Villa Madama that she once owned and which was initially designed by Renaissance artist and architect Raphael. It is now the property of the Italian government.

“The book is about discovering and understanding the client,” said Babin. “We talk about clienteling, to anticipate and understand our customers, but we want to celebrate those clients that impacted and inspired us, and who left a mark on trend-setters, such as socialite and influencer Dorothy di Frasso. The first master of clienteling was Sotirio, who created extraordinary relationships with customers, generation after generation. And the book is an insight into Rome back from the Twenties to the Sixties.”