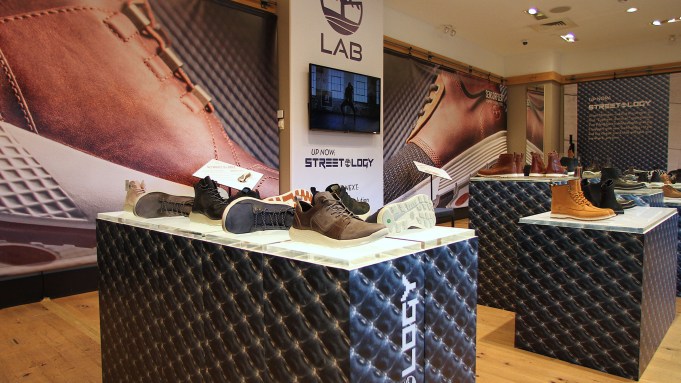 Timberland is bringing experiential retail to the King of Prussia mall. The VF Corp.-owned outdoors brand on Wednesday converted its store in the Pennsylvania shopping center to a new concept: the Timberland Tree Lab.

The store will be completely revamped every six to eight weeks and will focus on storytelling and providing unique experiences rather than simply stacking up product for sale. The first iteration of the Tree Lab is being called Streetology and is intended to shine a light on Timberland’s new FlyRoam footwear collection that features an AeroCore energy system, as well as several new styles featuring SensorFlex comfort technology.

“We started thinking about this earlier in the year when we came up with our five-year strategic plan,” said Kate Kibler, Timberland’s vice president of the company’s North American direct-to-consumer business. “We knew we wanted to drive the retail experience and thought about how we could innovate and stand out in a cluttered world.”

She said that for more than 40 years, Timberland has been known best as an outdoors brand characterized by its signature yellow boot. “But there’s so much more that people don’t know.” So the brand decided to take one of its existing retail spaces — Timberland has had a store at the King of Prussia mall since 1995 — and create an entirely new concept. Timberland operates around 1,500 retail locations globally.

The 1,900-square-foot Pennsylvania store will offer 1,200 square feet of experiences in a gallery-like setting, according to Bevan Bloemendaal, vice president of global creative services, and the amount of merchandise is being significantly reduced.

Streetology is intended to provide customers with a special experience starting with the minimalistic interior design, local craft beer samples or bottles of water that may be recycled into linings or shoelaces, and sales associates wearing custom Tree Lab hoodies who are armed with information on the latest style trends and local cultural events.

“That’s exactly what we’re trying to achieve,” he said. “There’s such a sea of sameness out there right now and product is still king, but it’s about being different. What’s not different is that we’re still focusing on offering beautifully crafted product, but what is different is how we bring that product to life.”

He cited a study that found 78 percent of Millennials will spend more on an experience than on product and Timberland is hoping that Tree Lab will fit that bill and “create an opportunity for a new wave of retail.”

The marketing plan for the Tree Lab will be centered around social media efforts on both the company’s channels as well as through local influencers. While Streetology is centered around the FlyRoam shoes, the entire store will be converted in a few weeks to SHEvolution.

“It’ll be all about women,” Kibler said. “A lot of people don’t even know Timberland makes women’s product.”

The experiences surrounding that concept will be centered around the female customer and what’s important to her. After that, a holiday installation will be offered beginning in early November. At the same time, Timberland is planning to open a series of “flex retail stores” around the country, beginning with Mall of America in Bloomington, Minn., on Sept. 1. These glorified pop-ups are less about marketing and more about zeroing in on the brand’s most popular markets, they said.

Other flex retail stores will open this fall in the Lenox Square in Atlanta on Sept. 8; Roosevelt Field on Long Island on Sept. 12; Queens Center in New York on Sept. 15, and the Somerset Collection outside Detroit on Oct. 20.

“We’re known mainly as a fourth-quarter brand, so we thought, why not capitalize on that with a full-price retail footprint,” Kibler said.

The stores, although temporary, will still “look like a Timberland store,” Bloemendaal said.  All of the sites will be in malls, where “traffic flocks in the fourth quarter,” he added.

Timberland is also planning to open two additional permanent stores this summer: one at the Stanford Shopping Center in Palo Alto, Calif., on Aug. 18, and a second on Couch Street in Portland, Ore., on Sept. 1.

Kibler said despite all the talk of a retail apocalypse and the death of the shopping mall, “people do still go to the top malls. Retail is not dead, it’s just evolving and we’re testing and learning all the time. We’re in a disruptive time and today, you have to be light and fast and agile.”

She said it’s no surprise that “retail looks very different than it did 20 years ago and we need to move as fast as the consumer.” But shoppers still like to touch things and for that, the store remains very important. She added that while the investment in Tree Lab and changing its design every few weeks is expensive, “not doing something scares me more than changing. This has our corporate team excited and they’re totally supportive.”