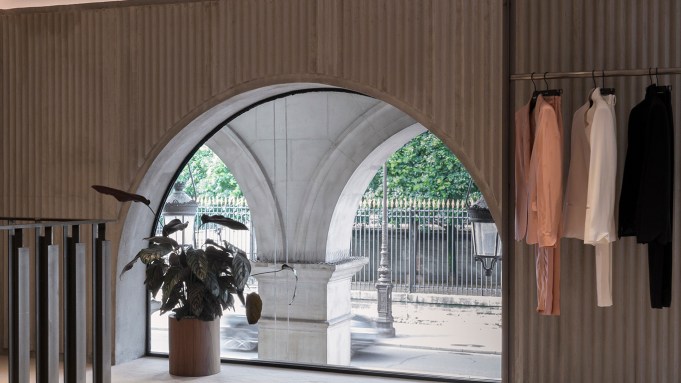 PARIS — Zadig & Voltaire is enhancing its retail experience with a new generation of flagship stores that combine gallery spaces and pop-up areas featuring young designers alongside its core collections.

The French brand recently opened the first of these — spanning 9,000 square feet, its biggest store to date — on the corner of Rue Cambon and Rue de Rivoli. A flagship along the same lines measuring more than 5,000 square feet will be inaugurated on Broome Street in New York in September during fashion week. The U.S. is an important growth market for Zadig & Voltaire, which celebrates its 20th anniversary this year.

“We are transforming our boutiques into experience spaces,” said brand founder Thierry Gillier, who is an avid art collector. “Zadig & Voltaire is a lifestyle brand, and art has always been part of that lifestyle.”

The brand owns an extensive art collection, previously on show in its headquarters, and has supported young artists in the past. Bringing art into stores is a way of sharing Zadig & Voltaire’s mind-set with consumers, said Gillier.

“It’s a way of life; for me they go together,” he explained. “The way I imagined Zadig was with art, I can’t conceive of it without. And from time to time, we have to animate fashion, and this is a good way to do that. We’re trying to create meaning.”

Artworks on display include paintings by Richard Serra, Julian Schnabel and Adam McEwen and sculptures by Franz West and Daniel Firman. Later this year, the Paris gallery space will feature a selection of works from young artists during the FIAC art fair in October. “We will offer space to young artists and produce their exhibitions, because young artists often need financial support in order to be able to work,” said Gillier.

The new Paris flagship, in a space formerly occupied by Dolce & Gabbana, was designed by Bernard Dubois, who aimed to combine elements from different eras and places, like “an exotic encounter between Auguste Perret, Denys Lasdun and Douanier Rousseau,” the architect stated. Dubois also conceived the upcoming New York flagship.

Over three floors, the “brutalist” Paris space, as Gillier describes it, alternates white features with concrete elements, an Italian stone floor and walnut, steel and leather furniture. Sneakers, shoes and accessories are found on the first floor; women’s and children’s wear on the second; while men’s wear and the art gallery are to be found in the basement space.

“It will allow us to show our whole universe in a way we haven’t been able to before,” Gillier said.

Digital elements include MyZadig, an in-store app that offers ordering for out-of-stock items, mobile payments throughout the store and seamless on and offline customer service. Pre-ordering is available for preview articles on show in the boutique, and Chinese, Russian and Arabic-speaking staff are also on hand.

A pop-up space, meanwhile, is dedicated to collaborations and limited editions, including collaborations with young designers. Currently on show are items designed especially for the brand’s 20th anniversary by students from Paris graphic design school Penninghen.

Fostering new design talent is another key part of the brand’s ethos, said Gillier. “We help them by giving them a space to show their designs,” he explained. “It’s really interesting, because it helps us to find new talent. We always need young designers, and when we find someone good, we produce them like we produce an art exhibition.”

The new Paris and New York flagships are not one-offs.  In key cities all over the world, Zadig & Voltaire is implementing larger stores and closing smaller ones. “It’s almost like a new beginning,” said Gillier. “We’re reinforcing our position all around the world. We are opening larger stores in all the most important cities.”

A new store in Brussels, opening in September, will also house a gallery space, and will replace two existing boutiques. New boutiques are also scheduled for Berlin and Stuttgart, and plans are in the works for several doors in China. All of them will offer digital features and a taste of the brand’s arty positioning.

“Because we are opening bigger spaces, we will automatically put artworks in them to enliven our boutiques,” Gillier. “In Paris, we have the dedicated gallery space, but elsewhere, it will be more like store windows or a sample of what we do.”