For the first time in the history of the yarn fair, international buyers exceeded Italian ones in attendance. 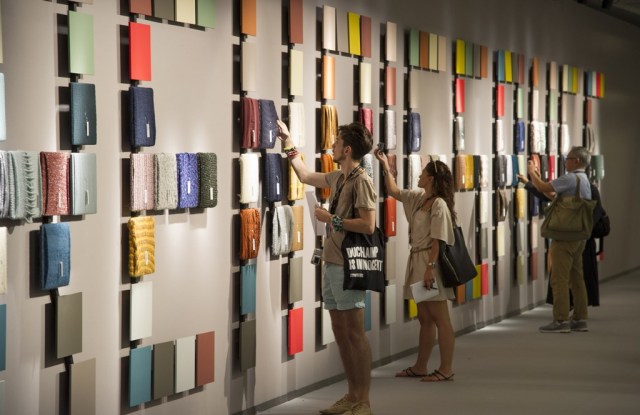 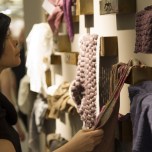 FLORENCE — Despite the unstable economic situation, Italian mill executives were in an upbeat mood at the three-day Pitti Filati show, thanks to heightened interest from foreign buyers.

This story first appeared in the July 24, 2012 issue of WWD. Subscribe Today.

Although the attendance at the shows, which took place at the Fortezza da Basso fairgrounds here, exceeded exhibitors’ expectations, there was a 14.3 percent drop in the number of visitors compared with July last year, with 4,600 attending. However, the return of U.S. buyers provided a boost for organizers and exhibitors, and for the first time in the history of Pitti Filati, international buyers exceeded Italian ones, with 2,340 compared with 2,260.

“Many markets are coming back to Italy for innovation and quality,” said Raffaello Napoleone, president of Pitti Filati.

Rachel Rothschild, sales manager at Tollegno 1900 USA Inc., noted on the second day of the fair that it was “busier than it has been for the past five years.”

“U.S. companies are sending more people,” Rothschild said. “This season should be better, thanks to a stronger U.S. dollar, which puts us back in the game,” allowing for more competitive prices on exports to the U.S.

Catherine Scales, women’s knitwear design director at Club Monaco, agreed, “there was a very positive atmosphere” at the show.

In addition to strong attendance of German, U.K., French, Japanese, Dutch, Russian, Turkish, Korean and Chinese buyers, there were pockets of visitors from new markets, such as Mongolia, Belarus, South Africa, Kazakhstan and Indonesia.

The consensus was that 2012 might not be as gloomy as forecast, thanks to a focus on high-end segments. A decrease in quantity ordered could be compensated by the rising value and quality of the products purchased, executives said.

“We have noticed a decrease in terms of quantity sold, but as selling prices are higher, we expect the sales to remain stable in monetary terms,” said Paolo Todisco, chief executive officer of Zegna Baruffa Lane Borgosesia.

“I believe more and more in Europe for the future,” he said. “The current crisis is an opportunity to improve.”

Likewise, Pierluigi Loro Piana, ceo of Loro Piana Group, said he had “noticed a positive and growing penetration in some European markets, which until now were more oriented on buying finished products in the Far East.”

In anticipation of volatile prices, mills have continued to implement their differentiation strategy initiated a year ago, bringing about a focus on innovation and product development.

“The multicolored, almost three-dimensional effect of the yarns and the research and return of chenille is what interested me the most for next fall-winter,” Scales of Club Monaco said.

Napoleone added that “cashmere is more experimental — the major trends are ultralight yarns, a lot of colors and hand-finished products.”

Loro Piana noted a demand for “yarns with a less classic effect, yarns with a tweed look and those with slightly wavy surfaces played a crucial role,” adding that “yarns with different blends of fibers that allow colorings with unique effects were also important this year.”

Luciano Bandi, managing director at Loro Piana, added, “We have adopted the patterned-yarn theme, modifying the classical look, and have introduced a series of new color processes. And it seems that our efforts have been much appreciated.”

At Ecafil Best Industrial Filati, textured fabrics were standouts. Owner Giampiero Livi predicted “a confirmation of patterned yarns, along with the whole world of wools, from alpaca to mohair.”

“We worked a lot on surfaces, mélanges of mouliné and tweed,” said Lola Coppini, communication and image director. “The focus was really on colors and textures.”

To retain existing customers remains fundamental to spinners who want to secure their position in key markets.

“With regards to reference markets, our company has consolidated its presence in certain areas,” Bandi said. It is clear that our objective is to expand in countries like France, a big protagonist, the United States, and Italy, which still represents 70 percent of our turnover,” said Loro Piana’s Bandi.

Overall, Bandi said it was “an edition to remember, very lively and interesting to experience due to the excitement that has finally returned to Pitti Filati.”