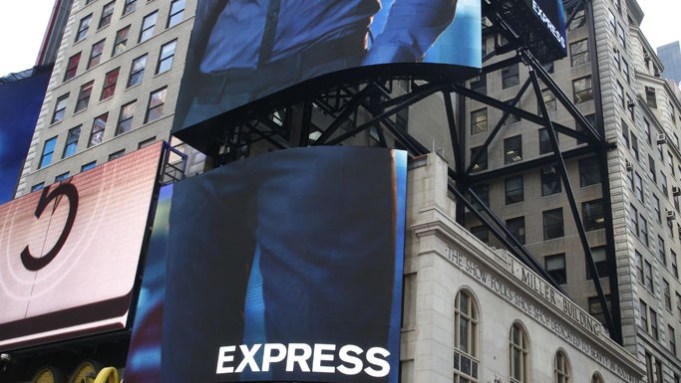 Express executives avoid the term “flagship,” though if there ever was a store that fit the bill, it’s the new Express in Times Square.

It’s the largest and splashiest in the chain, with a towering LED screen on the exterior, a glass-enclosed chandeliered room for dresses, mobile point of sale, marbled checkout counters and tall, tubular glass vitrines to display the short flared tulle skirts, flirty floral dresses and NYC graphic T-shirts, often vigorously promoted with deals.

“It’s Express on steroids,” said Michael Weiss, the chairman and chief executive officer of the 632-unit, $2 billion-plus chain. “This is an elevated, finer looking store where the homes for each category are much more defined. Our billboard, with 9,000 square feet of LED, is the biggest and highest-definition billboard in the whole of Times Square. You know nobody whispers in Times Square.”

With the Express expansion, “We are going after not so much flagship locations — there are so few we would call flagships. We are going after ‘hub’ locations, and currently looking at 25 to 30 where we want to be super strong and super competitive, where the mall [or the neighborhood] demands it and has become a hub for wonderful retailers all giving it their best shot.”

The Times Square store, located in the landmark, marble-framed I. Miller Building distinguished by statues of actresses Ethel Barrymore, Marilyn Miller, Mary Pickford and Rosa Ponselle, will have a grand opening in late March. The “soft” opening was last Thursday. The store has three levels and 22,500 square feet of selling space, compared with the vast majority of Express units, which are one-level and 8,000 square feet. Other Express ‘hub’ stores have opened in Miami’s Dadeland mall, the Fashion Show mall in Las Vegas and on Union Square in San Francisco, but Times Square is the latest incarnation of a prototype introduced at the King of Prussia mall outside Philadelphia more than two years ago. Stores on Fifth Avenue and 18th Street and Madison Avenue at 51st Street also exhibit elements of the format.

“I don’t think it’s about having flagship locations, it’s about having a dominant presence in key locations to help elevate and build the brand,” said David Kornberg, president of Express. “The Times Square store is important, considering the large international tourist traffic it will get and the ‘Express’ desire to become more global.” Currently, Express has just 41 stores outside the U.S., in Canada, the Middle East, South America, Central America and Mexico. Express is also thinking more omni, rather than brick and mortar, as Weiss noted. “We came late to the game in e-commerce, five or six years ago, but we are catching up.”

According to Kornberg, Times Square is planned to be “the number-one store in the chain” in terms of volume, but he would not provide the sales projection. Kornberg underscored how effective the store is at demarcating the major categories or zones: party/going-out clothes, wear-to-work, jeans and casual. In the last few years, shoes, fragrances, loungewear and watches have been added to the assortment, and active and yoga wear is being tested in about 30 locations. However, the party component, Kornberg said, “is really the essence of the brand.”