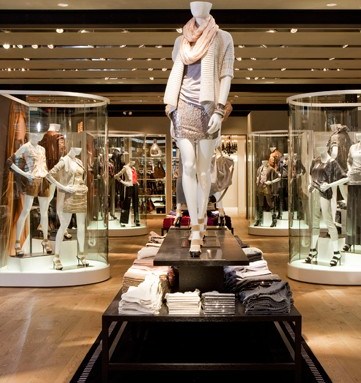 For its recast collection, Express has a prototype store and is busing about 150 Wall Street analysts and investors from New York to the site in King of Prussia, Pa., on Wednesday.

With a dual-gender “denim lab” and mannequins posed inside tall, round glass vitrines and on a runway down the selling floor, “it really is very different than a mall store,” said Michael Weiss, president and chief executive officer of Express Inc. “It’s more like a store for a wonderful street in a cosmopolitan city.”

That’s precisely the kind of setting where Express is glaringly underpenetrated, and where Weiss sees fertile grounds for the brand’s latest merchandising formula and elevated store design, created by the same Japanese architect responsible for the Colette and Uniqlo stores in Paris, among others. Of Express’ 591 stores, only 13 are street locations; 578 are in regional malls, and strip, hybrid and lifestyle centers.

Weiss will be leading Wednesday’s caravan, hoping to impress the financial crowd, and ultimately lift the stock price. A retail stock can react to a business’s future prospects, plans and store productivity levels, though in the case of Express, there’s no need to goose the shares since they generally performed well since the company went public in May 2010.

Weiss is also working hard to restore the brand’s reputation as a leading fashion destination. Through much of the Eighties and Nineties, the specialty store was hot, and could blow out a million or two key items in a season. But the formula went stale, lost much of its profitability, and Weiss, who ran the chain for most of its 31-year-history, left the business not long before the parent Limited Brands Inc. sold it to Golden Gate Capital. In July 2007, the private equity fund brought Weiss back to run the business and reinvent it.

The $1.95 billion Express still caters to the same teen-to-twenty-something audience, but now emphasizes outfits. It’s collection-driven, focused on four categories: casual and wear-to-work apparel, party attire and jeans. The prototype, Weiss explained in an exclusive interview, “segments the four elements of the collection in a way that showcases them and makes them more understandable.” Furthermore, stores age and should be overhauled every seven to 10 years, he added.

Weiss thinks the new format could be taken to streets in San Francisco, Chicago, Miami and Manhattan, and other downtowns, and regards it as a flagship strategy with a larger footprint — 13,308 square feet at King of Prussia compared with the average of 8,500 square feet — and an urban look, representing a departure from the mall-based approach of the past.

In Manhattan, for example, Express only operates six stores. “We could easily double that,” Weiss said. “We are looking at prime locations in Manhattan. We would like a flagship in Manhattan, a bigger space. We would like 42nd Street.” Weiss also wants a larger location in SoHo, from the current site at 584 Broadway.

In Chicago, “We have a good store on Michigan Avenue. We could have a better store there.…In Aventura [north Miami] we are looking to be bigger, but it’s a fabulous store there.”

Express sees about 100 store openings in the U.S. in the next five years, as well as 50 in Canada, with the first opening there set for September. In addition, in some of the new stores, elements of the prototype will be adapted to certain existing units, either those undergoing renovations as a result of lease obligations or where business prospects justify remodels.

However, Weiss said he’s not green-lighting the prototype just yet. “We will call it in a few months, but we are really hoping to go sooner rather than later with the new design. Some of the new stores will be under the existing look because they were in the pipeline before the new store design was fully executed. We are very enthused, but not ridiculous. We are not financially committed to this yet until we get the read on what it does for business and our customers.”

Sales figures, including units per transaction and average dollar sale, at King of Prussia, and a second, 9,131-square-foot prototype recently opened in the Kenwood Towne Center in Cincinnati, will be compared with prior figures at the locations and other Express stores. “We will know if the difference in sales was strictly due to the design,” Weiss said.

Masamichi Katayama, interior designer, founder and principal of Wonderwall, created the prototype. Express knew him from the Colette and Uniqlo stores he created in Paris and were impressed by the style. “It’s modern, a bit edgy, with a real elegance in terms of materials. It’s downtown space with uptown finishes,” said Weiss.

The Express prototype has fewer, more dramatic fixtures than older stores and seems relatively expansive. Glass vitrines act like “internal windows” to call out outfits in a splashy way. The denim lab in the middle of the store reflects a long commitment to the category. There’s a suspended trellis in aged timber, polished concrete and aged oak flooring, black velvet curtains and mortar walls. Glossy white walls divide the space into rooms and contrast the natural wood perimeter shelving. There are also recessed stainless steel troffers, hanging sculptural elements, interactive touch-screen computers and live-streaming of Express fashion shows. Fixturing is flexible to give greater space to stronger merchandise, and reduce weaker areas.

Denim with narrow legs, new washes and wider bottoms, as well as jeggings, long skirts, soft blouses and glitter, are bestsellers in a selling season going well, which is reflected in the performance of the stock. It hit a 52-week low of $12.90 last September but has been on the upswing, peaking at $23.52 on May 12. Two weeks later, the firm offered second-quarter guidance that fell below Wall Street’s expectations, even as it delivered better results than analysts had expected, with earnings, net and same-store sales and gross margins all registering gains.

The stock briefly dipped below $20 on the second-quarter forecast, then recovered, closing Monday at $21.51, up 4 cents or 0.2 percent. During its life as a public company, shares of Express have appreciated 26.5 percent. During the same time span, the S&P Retail Index is up less than half as much — 12.6 percent.