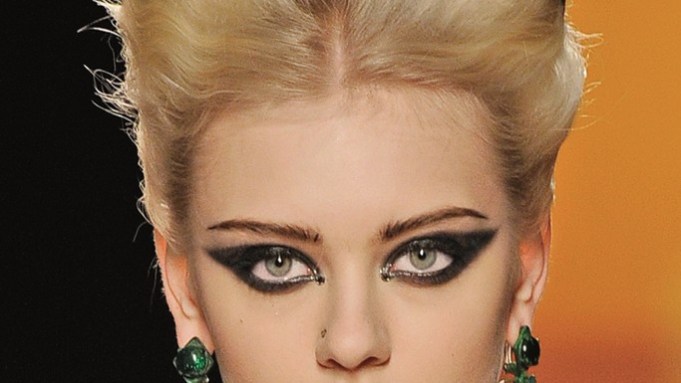 Intricate embellishment is a hallmark of couture clothing, and at the spring 2013 showings, held in January in Paris, the technique extended from the frocks to the face. Textural elements—on eyes, lips and hair—added an intriguing new twist to runway beauty looks. At Chanel, models’ eyes frothed with fine pieces of tulle, which resembled shadows from the boldly drawn lashes conceived by in-house global creative director for makeup, Peter Philips. At Atelier Versace, makeup artist Pat McGrath fashioned smoky eyes accented with a shiny green detail. “Donatella [Versace] was really obsessed with a neon green metallic that’s in the shoes and in the clothing—really lime, hot green metallic,” explained McGrath. “So we added just a little strip of eyeliner to the outside of the eyes as a line and a little bit on the inner corners.” At Dior, McGrath decorated models’ mouths with crystals in bright shades of red, pink and coral, while Val Garland concocted a more subtle effect at Giambattista Valli, using just the tiniest touch of glitter on the lips. “[There’s] a little bit of a sensuality at the center of the lip, where we put the glitter,” she said. Meanwhile, at Alexis Mabille, Odile Gilbert coated models’ French-braided hair with silver leaf as an ethereal complement to the designer’s superfemme collection. Gilbert also dreamed up the extravagant beehives at Jean Paul Gaultier, where Lloyd Simmonds did the makeup, a bold look that included crystal studs in the corner of each eye and culminated in an Indian-inspired design on the bride. “It’s all very dramatic,” said Simmonds, “and winged out and winged up, but a sort of elaborate, couture version of that.”