The mammoth launch of 681 shop-in-shops is taking on greater significance than either party would have imagined. 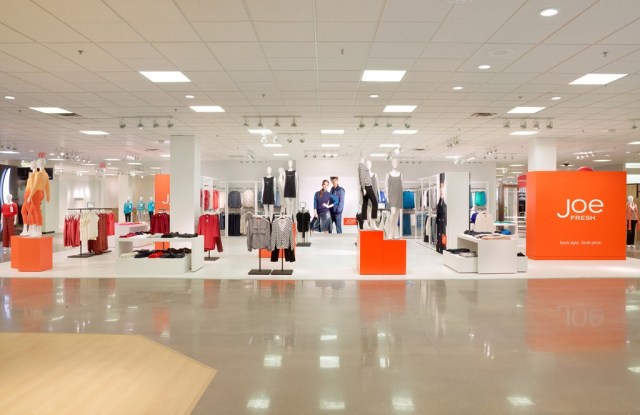 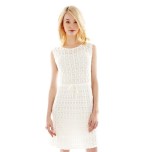 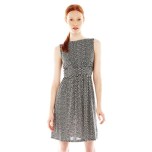 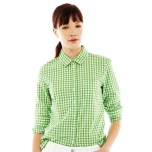 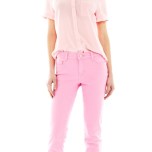 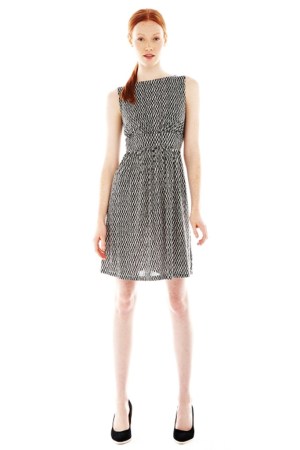 A look from Joe Fresh. 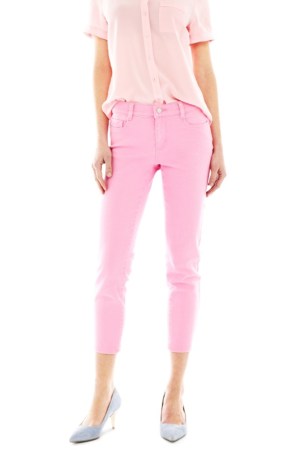 A look from Joe Fresh.

The mammoth launch of Joe Fresh shops inside 681 J.C. Penney stores simultaneously Friday is taking on greater significance than either party would have imagined last July when the deal was struck.

Not simply because it’s Penney’s highest profile and hippest brand launch since the department store’s reinvention began in 2011. It’s also because after steep losses and scaring shoppers off with radical pricing changes, Penney’s seriously needs a winner and something to validate the controversial modernization strategy being implemented by J.C. Penney Co. Inc. chief executive officer Ron Johnson. He’s been dogged by rumors of a possible resignation, which were denied by the company Tuesday.

“We are one of many new concepts being brought to J.C. Penney. But there is no question about it: There seems to be a bit more focus on our brand working,” Joe Mimran, the founder of Joe Fresh, told WWD on Tuesday.

Penney’s this spring is also banking heavily on a revamped home floor with 15,000-square-foot furniture departments rolling out to more than 200 stores in May and, starting in the next few weeks, exclusives from Jonathan Adler, Terence Conran, Bodum and Michael Graves. Martha Stewart remains questionable, pending the outcome of the contract dispute involving her company, Penney’s and Macy’s Inc.

Right now, all eyes are on Joe Fresh as a critical step in Penney’s quest to capture a younger audience and maybe convert some traditional shoppers to modern styles. Recent smaller launches such as Pearl by Georgina Chapman of Marchesa and L’Amour Nanette Lepore have the same objectives. But establishing a new base of customers can take years and Penney’s may not have enough time. There are concerns the money is running out due to the reinvention costs and sales slide resulting from the new strategy, and that business must pick up soon.

“This quarter is going to look interesting for Penney’s. Sales have to be better to balance off the expenditures of the shops,” observed Michael Tersigni of Tersigni Palachek design collective, who formerly did store design and rollouts for Old Navy, Ermenegildo Zegna, Disney and Banana Republic.

Mimran, when asked if he was worried about Penney’s huge losses and getting paid, replied: “It’s not a concern to us at this point. When you are in the midst of a launch you put everything aside. Penney’s ended the year with a good amount of cash and still has credit facilities they have not drawn upon. We will see how this unfolds. You are going to get a read almost immediately in terms of the acceptance of our product.”

He urged patience on judging Penney’s reinvention. “These are very early days for a transformation of this size. You can’t expect the consumer to turn on a dime. It takes time.”

On the brighter side, Penney’s sales comparisons will be easy this year considering last year’s sharp declines, and Joe Fresh products on jcp.com show signs of helping the cause. Last week in a conference call, Johnson cited strong early results. Liz Claiborne was Penney’s top-performing online brand until Joe Fresh took the title after its launch on jcp.com during the Academy Awards on Feb. 24.

The mechanics of a national shop rollout are familiar for Penney’s. It’s been done with such brands as Liz Claiborne and Levi’s. “Execution is not the issue. Companies gear up to do these things,” observed Arnold Aronson, managing director of retail strategies at Kurt Salmon. “They have the same systems and procedures and a template with all of the instructions. It’s spec-ed out. The issue is how long is it going to take for brands they’ve brought in to make an impact. Penney’s may be pinning their hopes on too few actual brands like Joe Fresh. Remember, they’ve decreased their natural audience by 30 percent. Penney’s is at an inflexion point right now.”

Tersigni had a somewhat different point of view: “Getting that much product produced and delivered at the same time, particularly since it’s from overseas, has to be a huge challenge. Penney’s must have gone into production early.”

He stressed that shop construction and deliveries to stores have to be consistent; selling and visual teams must be educated about the product, and visual directives must go out, all to maintain the brand equity and standards door-to-door. “If the consistency isn’t there, the brand image gets diluted,” Tersigni said. Compared to the old Penney’s sea of racks presentation, “Now you’ve got individual brands that need to be expressed, which is exponentially more complicated to keep consistent.”

The story of how Joe Fresh and Penney’s came together began in February 2012 when Johnson sent Mimran a note, reading in part, “I love what you are doing. Let’s have coffee,” kicking off additional e-mails. “I put him on my invite list for our Fifth Avenue opening,” in March 2012, recalled Mimran. “Ron was good enough to drop by on his way back from London. One thing led to another. We started talking about possibilities. We met again in the store and hammered out the terms of the deal — in about an hour.” Lawyers took more time to formalize a four-year deal.

“We had a pretty tight timeline from the outset. We absolutely stuck to it,” Mimran said. Mid-February 2013 was Penney’s deadline for receiving goods in time for Friday’s launch, and 99 percent of all the orders were completed, Mimran said. Joe Fresh designed the samples, got the assortment produced and handled quality control.

Noting Joe Fresh already ships to 350 Loblaws in Canada, where the brand has 1.8 million square feet of space, Mimran said, “The quantities with Penney’s [which is unveiling 800,000 square feet of Joe Fresh shop space] weren’t the issue. It was really the tight timeline.” The Chinese New Year in February complicated matters because factories were closed. “It backed everything up quite heavily. We had to put in new processes for this relationship. We had to beef up our merchandising team, our quality control team and the sourcing and production. There was quite an addition of staff from a visual standpoint as well.”

Andrew Shannon, vice president of stores for Joe Fresh, has been hiring visual merchandisers out in the field, and assisting JCP to ensure the brand’s standards.

“The biggest thing was how quickly we decided to implement, from conception to opening the stores — just seven months,” Dougherty said. “We had to be very nimble and work closely with the Joe Fresh team.”

Joe Fresh shops at Penney’s will range from 1,000 to 2,500 square feet, necessitating 25 different layouts. “That in itself was a feat,” Shannon said. Each shop will debut with about 100 styles in different colors, adding up to more than 250 choices. The collection at Penney’s is women’s, no men’s wear is included, and shops are prominently situated by the front entrances. There are 12 vignettes per shop, on average, that for example would show a silk blouse in six different colors, paired with a pant, or a series of tops paired with a skirt. New goods will arrive every month, so at least a third of the shop will be different often. No product from Joe Fresh’s runway collection was purchased. Penney’s stuck to the moderate and low-priced items.

“The merchandise is really the star. It’s not so much about the decor. It’s basically white with orange highlights,” said Michael Fisher, chief creative officer at Penney’s, who formerly worked at Apple with Johnson.

“From the mannequins, to the signage, to the fixturing, to the density of product, all of that was vetted in great detail,” Mimran said. “It was very collaborative. One of the things they tweaked was our fixturing. We had it set right on the Street,” meaning Penney’s new aisle format running past all the shops. “Ron suggested why don’t we just push this back two feet. It was a small suggestion that made a difference,” helping differentiate Joe Fresh and give it some breathing room.

There was some hang up with the hangers. Penney’s wanted its standard black hangers; Joe Fresh disagreed. After some “very lively and colorful conversations,” Dougherty noted, Penney’s was convinced to modify, choosing a white hanger with a softer shoulder that’s different from any other in the store. “The expense was minimal, but we think it makes a big difference,” Fisher said.

There was also some tweaking to the collection, mostly related to weather. For example, Penney’s was seeking some summer styles earlier than Joe Fresh, being based in Toronto, would normally offer, and so a few long sleeves became short sleeves. Some deliveries on prints were accelerated as well.

A handbook for Penney’s stores was developed, specifying where the fixtures go, which colors should be together, where the tops and bottoms should be. Penney’s didn’t staff up for the launch, instead shifting responsibilities in the buying team and others. Penney’s selling associates continue to be roving, with none designated just for Joe Fresh.

Penney’s clearly put Joe Fresh on its priority list with a strict deadline. “This one was really tight. Sometimes retailers drag their feet. But this was probably the most organized big-time rollout I have been involved with,” said Ralph Pucci of Ralph Pucci International, which took an order to supply 4,300 mannequins. “I’ve got a big stake in this. We worked round the clock and made sure we didn’t let up on other orders. We hired more people for sanding, spraying and packing.”

For Joe Fresh at Penney’s, Pucci created a variation of the headless mannequins he did for the brand’s freestanding stores in the U.S., adding a simple, abstract head and neck. “It’s sculptural, Brancusi-esque,” Pucci said. “Joe Mimran is very influenced by modern art.”