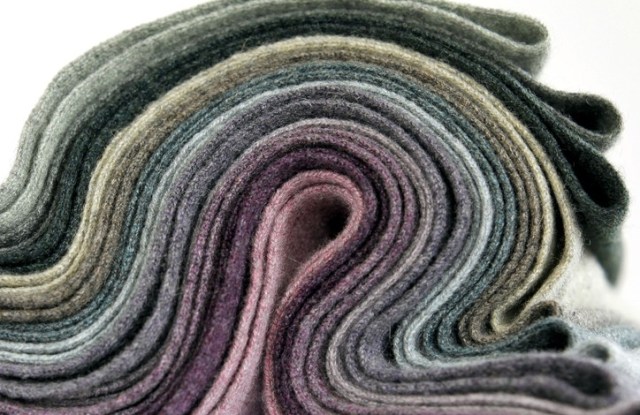 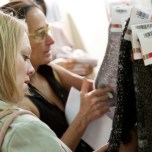 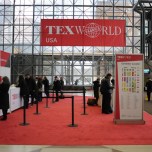 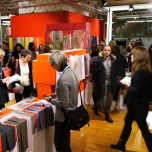 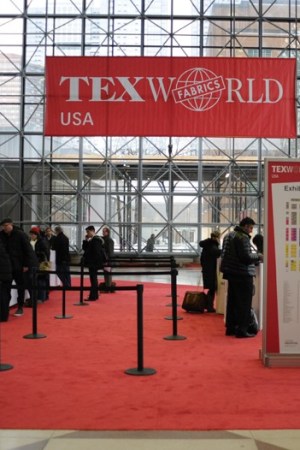 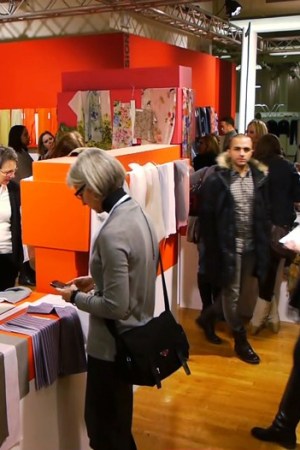 NEW YORK — In today’s quickly evolving world of global sourcing, where once-stable aspects such as cotton prices and manufacturing in China have become uncertain, apparel and textile executives are looking for answers to lots of complicated questions as they set their purchasing and production plans for upcoming seasons.

They’ll be looking for the best country from which to buy their fabric and produce their clothing, try to figure out what blends will be most cost-effective and accepted by the consumer, and how to find the best factory for large lots or short runs. Many of these companies are likely to seek out answers, make new connections, and scout for fresh products and approaches next week at a full course of trade shows here.

Texworld USA is preparing for its biggest show ever, according to Alexandra d’Archangelo, marketing manager for New York Textile Shows for Messe Frankfurt Inc., which produces Texworld, along with the co-located International Apparel Sourcing Show and Home Textiles Sourcing Expo.

“For first-time Texworld USA exhibitors, their participation is often their entry point to the U.S. market,” d’Archangelo said. “First-time exhibitors are on a fact-finding mission to learn about how U.S. companies buy, as well as their expectations regarding products and terms. Repeat Texworld USA exhibitors tell us that one of their main objectives is to meet new buyers at the show.”

Exhibitor participation at Texworld USA is up 12 percent over the July 2010 edition to 317 exhibitors, d’Archangelo said, with notable increases from Turkey and India. U.S. exhibitor participation is holding strong and is concentrated in the Lenzing Innovation Pavilion. Attendance across the three shows, set for a three-day run starting July 19 at the Jacob K. Javits Convention Center, is expected to reach 6,000. D’Archangelo said there seems to be more enthusiasm this season as the show approaches, despite continued concerns over raw material prices.

She noted that in the January Texworld USA attendee survey, 27 percent of respondents selected fabric trade shows as their primary means of material sourcing. Texworld also asked from which countries would attendees like to see more exhibitors. The results: “Number one, we still see China, and number two is the U.S. domestic resources. We’re also seeing more participation from India and Pakistan.”

The International Apparel Sourcing Show’s presence will be maintained from last year, with about 105 to 110 exhibitors. D’Archangelo said the show is getting more attention from apparel export promotion associations and consular offices.

Messe Frankfurt recently formed a partnership with MFG.com, a global online marketplace for manufacturers looking to source textiles and machinery. Attendees will be made aware of MFG.com’s involvement during the registration process and will be offered a trial subscription.

Lenzing Fibers Inc. is hosting the Lenzing Innovation Pavilion at Texworld USA, with 35 apparel and two home exhibitors, as well as the Lenzing Seminar Series.

“Over the past few shows, we’ve definitely seen an increase in exhibitors from North America, which supports the need for additional sourcing in this region with spinners, knitters and garment makers from this hemisphere,” said Tricia Carey, merchandising manger, USA, for Lenzing’s Textile Fibers Business Unit. “Texolinni, a vertical knitter based in Los Angeles, is joining the Lenzing pavilion for the first time, and Tuscarora Yarns, a spinner based in North Carolina, is exhibiting again and recently announced the expansion of its plant in China Grove, N.C.”

Carey noted that Santanderina, a premiere weaver based in Spain, will show its Tencel denim and chino fabrics, joining mills in Lenzing’s pavilion from elsewhere in Europe and North America, as well as Asia.

Lenzing’s Tencel cellulosic fiber is often blended with cotton and has benefitted from cotton’s steep rise in prices over the last year, Carey said. She noted that Lenzing had a record 45.8 percent sales increase in the first quarter to 532.1 million euros, or about $775 million, which it credited to “dynamic expansion of fiber production capacities, the continuing strong demand for Lenzing fibers, as well as significantly higher fiber sales prices.”

Among Lenzing’s important marketing topics for the show, Carey noted, are Tencel C and Expo-Tex. Tencel C contains oceanic micro particles called chitosan, which is made from crab shells. When directly in touch with the skin, the fiber is said to provide a cell-renewing effect, while also acting as a moisturizer and skin protector. Lenzing is working with a group of vendors to introduce it into the supply chain. Expo-Tex is an online trade forum aimed at promoting textile networking.

At Spin Expo, which runs for three days starting July 18 at the Metropolitan Pavilion & Altman Building on West 18th Street, a global array of yarn firms will be represented among the 85 or so exhibitors, while many more knitters have been added to the mix, said Karine Van Tassel, founder and organizer of the fair.

“We have more groups from Europe and more large groups from Asia,” Van Tassel said. “We also have a number of knitwear manufacturers because we realize there is a demand in America for manufacturing. Since in Asia most of the companies are vertically integrated, from fiber to garment manufacturing, we think this is a good opportunity.”

She noted new exhibitors at the show’s third edition in New York are coming from places such as India, Turkey, South Africa and Afghanistan. The show has been operating in Shanghai for 10 years.

“I think it’s a good moment for this kind of show,” Van Tassel said. “Contrary to what everybody is talking about, I find that even though the costs of all types of fibers have risen, this has resulted in the exhibitors putting a lot of new ideas in their products and in the development of their collections. They realize they have to find solutions to stick to their prices, using more creativity.”

She said with China experiencing increases in manufacturing costs, there is a return to more production in Europe and the U.S. She said companies “are also realizing that it is important not just to look for the lowest prices, but to put your production in places you can rely on, that can do large quantities, that are reliable, and in many cases that means coming back home to manufacture.”

Andrew Olah, president of Olah Inc., which produces the Kingpins boutique denim show, set for July 19 and 20 at Skyline Studios on West 36th Street, said the volatility in the sector is high.

“The biggest issue is definitely the cotton situation,” Olah said. “Prices are 100 percent higher than a year ago, there’s a drought in Texas and flooding in the Delta area and some people believe we’ve not seen the end of high cotton prices. It’s very difficult for the customers planning long-term with their margins. At the show, people get a chance to talk to a lot of people from a lot of different countries, people who are experts in what they are doing, and so when you walk away from the show, you have heard a lot of different perspectives on what is coming, and I think that’s really healthy.”

Kingpins, now in its seventh year, will have 33 or 34 vendors, which would make it the largest so far. Olah noted that exhibitors run the gamut from fiber companies, such as sponsors Invista and FiberMax, to chemical companies, fabric mills and garment manufacturers.

Serving as an appetizer to next week’s main course of sourcing shows is Première Vision Preview New York, running Wednesday and Thursday at the Metropolitan Pavilion & Altman Building, featuring fall 2012 fabric and accessories collections from some of the world’s top mills.

A key fair where designers come for a first taste of seasonal fabric trends, this edition of Première Vision New York rebounds to 102 exhibitors from 15 countries — a 12 percent increase from a year ago and the most since the world financial crisis began in 2008, according to organizers — with 15 new to the show and 10 returning after several sessions. This season, alongside the core women’s offering of noble knits, high-performance fabrics and high-end novelties, men’s wear fabrics are enhanced with 20 suiting specialists.