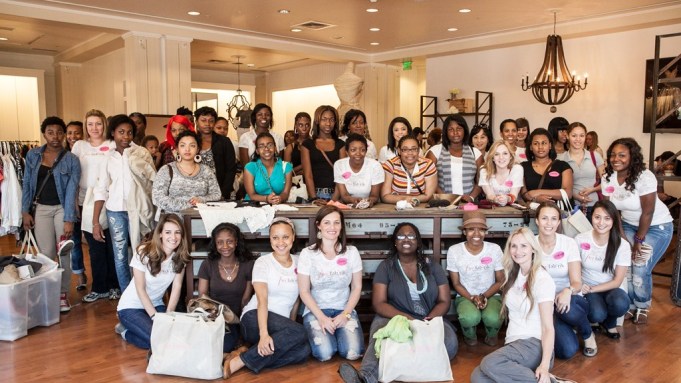 ATLANTA — In early October, Dana Spinola, founder and owner of Fab’rik boutiques, will turn her 3,000-square-foot flagship in midtown Atlanta into Free Fab’rik Community Boutique to help low-income women buy quality clothes at a low cost, and also to help them find direction in their lives.

Spinola and her friend, Kim Fettig Bartlett, a local television news anchor, were inspired to found Free Fab’rik after Hurricane Katrina sent hundreds of homeless New Orleanians flocking to Atlanta, and after the financial market collapse in 2008 that crushed the job market. They created the organization in 2009. Spinola said they wanted girls in need to experience the thrill of boutique shopping without the pressure of price tags.

Free Fab’rik began as free shopping sprees of donated clothing for low-income girls and women age 13 and up. It has grown and flourished since then, beginning in the midtown location, then moving to include Fab’rik’s nearby Atlantic Station boutique. Now, it offers four sprees a year.

Most donations come from Spinola’s own clientele, from basic T-shirts to cocktail dresses, as well as scarves, purses, jewelry and other accessories. Hudson, Paige and DL1961 donate samples of their high-end denim. Prices will range from about $1 to $20.

She stressed that the clothing “is in great shape because that goes with dignity.”

Profits go back into the organization to support a mentoring program that lasts for six months for each person. “We’re offering young women [ages 18 to 30] jobs in the store, where we’ll teach them how to be professional and learn retail and other basic business skills,” Spinola said. “A mentor will be working along with them.”

The mentoring program consists of the part-time position at the boutique, participation in small group meetings for two hours a week, a mentor to meet with monthly and Real World speaker nights, during which a professional person will speak about their job. “We ask the girls what they want to be, and we challenge them to figure that out,” Spinola said.

Spinola and her board realized that the midtown store was perfect for the community boutique. The space, which has exposed brick walls, “is stunning and cozy,” she said. “It has more dignity than other places we looked at, and it’s more private.” In addition to retail, the store will have an area for small group meetings and will offer free sprees, dinners and speakers for women in the mentorship program.

Free Fab’rik will continue the shopping sprees once a month. Spinola has 22 Fab’rik boutiques in the South. The ones in Macon, Savannah and Athens, Ga., and Austin, Tex., already offer free sprees, and Spinola said units in other cities are beginning to offer them. Her goal is to eventually have the community boutiques in all cities where she has stores.

Fab’rik’s annual charity event (the second fund-raiser was held in June) and proceeds from Spinola’s own White Collection line both support Free Fab’rik.