Façonnable has opened in the downtown Union Square retail neighborhood here as the city’s retail landscape evolves because of economic upheaval. 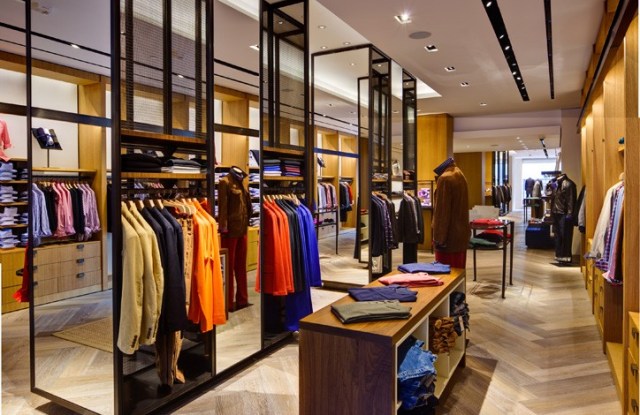 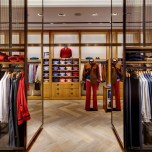 SAN FRANCISCO — Façonnable has opened in the downtown Union Square retail neighborhood here as the city’s retail landscape evolves because of economic upheaval.

It is the sixth U.S. location for the high-end French tailored clothing and sportswear brand and the third featuring its new store design.

The 4,400-square-foot rectangular space has doors opening at each end, onto Post Street, where Burberry, Prada and Thomas Pink are located, and Maiden Lane, a pedestrian street with Chanel and Marc Jacobs, among other luxury neighbors.

Bob Green, president of Façonnable in the U.S., described San Francisco as a “fashion city” where men and women enjoy dressing up for work. And they are among the brand’s targets. In addition, with the city’s breezy maritime weather, San Franciscans like to layer, which Green said is a core fashion statement for Façonnable. The brand got its start in men’s wear 50 years ago and is based in similarly temperate Nice, France, on the Mediterranean. There are now 44 European Façonnable stores.

Façonnable’s sales are skewed 65 percent men’s wear to 35 percent women’s wear, but San Francisco seems to be breaking the pattern. “Since opening last week, we’ve sold 45 percent women’s wear,” said Green, speaking in the store Tuesday before a party to celebrate the opening. “I believe that in five years sales will be 50-50.”

In pursuit of “an affluent luxury customer,” Façonnable’s merchandise is value-priced for the category, Green said. Its men’s shirts in colors and stripes with signature magpie crests, retail for $145 to $195 and suits are $895 to $1,495. Women’s jackets range from $395 to $695, and skirts and pants $295 to $495. Among popular items in San Francisco have been a $1,295 men’s wool peacoat with shawl collar, and an $895 women’s three-quarter belted navy cashmere coat, with a water repellent lining.

Façonnable is owned by Beirut-based M1 Group, which bought the brand from Nordstrom in 2007 and updated its classic fashions. More expansion in the U.S. and globally, as well as introduction of merchandise such as accessories, are in the works, Green said.

“We have shareholders who believe in Façonnable and are very interested in investing in the brand,” said Green, noting U.S. wholesale sales are also being expanded to select specialty stores, beyond its long-standing Nordstrom business. “We will strategically develop the new business around Nordstrom.”

Façonnable has arrived in affluent northern California as the economy of the region, which has 7.5 million people, shows glimmers of recovery from a recession that’s caused changes in retail. Prominent spaces in Union Square were vacated this year by Disney, at Post and Powell streets, and Virgin Megastore, at Market and Stockton streets. However, Paul Smith and Vince have added stores on Geary Street. In September, French brand Cop Copine opened its first U.S. store under license on Powell Street.

And this week, San Francisco-based men’s wear institution Wilkes Bashford filed a voluntary Chapter 11 petition and was acquired by the Mitchell family, operators of the largest family-owned specialty store in the U.S. The deal is for $4.6 million in cash and is subject to higher offers and bankruptcy court approval.