The concept store on L.A.’s famed street of streetwear brands aims to carry the momentum of its popular concept shop into 2017. 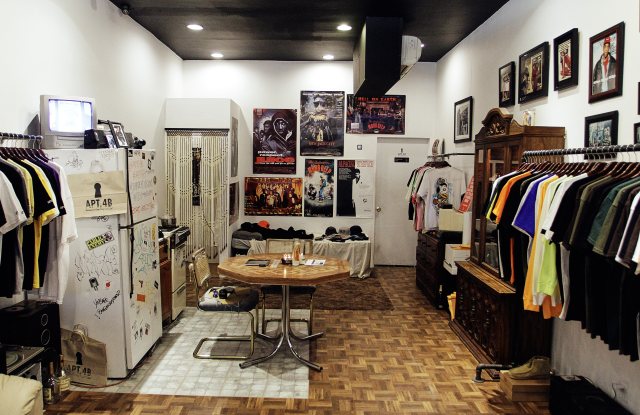 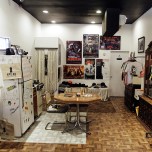 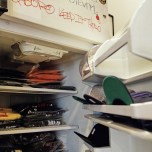 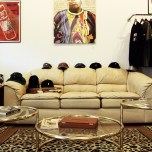 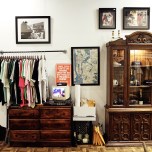 LOS ANGELES — To the curious onlooker walking down Fairfax Avenue, Apt. 4B has at one time or another appeared to be a Nineties cell phone store, botanica or vinyl outpost.

The owners of the streetwear shop internally call that window fronting the street for passersby their “Macy’s window,” but the installations — swapped out monthly — are just the start of this one-of-a-kind retail experience that mimics the studio apartment of a Nineties lover of hip-hop, complete with a living room where a TV plays movies on VHS tapes, kitchen and bed.

“This my childhood,” said the brand’s designer and cofounder JP Moronta, who goes by Moon. “I’m from New York, from Queens — Corona to be exact — and I was fortunate throughout the Nineties a lot of my friends were in their 30s and I was just engulfed by the culture. The hip-hop, street culture.”

The references to hip-hop music and movies such as “Scarface” and “Goodfellas” are infused in the decor and the Apt. 4B apparel sold there. Moronta and cofounder Monique Carmen say Apt. 4B furniture is likely in the cards next year after already dabbling in home accessories, such as coasters and a charger, this year.

“These are all things growing up we lived vicariously through these characters,” Moronta said. “Some of us thought we were Tony Montana or aspired to be that and it was just this motivation — not to become this huge drug dealer, but coming from nothing and making something out of your life.”

After being opened for a year, the store has made a splash and carved a voice for itself on what Carmen, the concept’s other founder, likened to the Rodeo Drive of streetwear brands, attracting the likes of Jay Z — the store’s name after all comes from the lyrics to a track off the rapper’s “In My Lifetime” album — for the 20th anniversary party of his first album, “Reasonable Doubt.” Nas has also been through its doors and the store has been the host venue to three “Drink Champs” podcasts, the most recent of which brought in the members of A Tribe Called Quest.

Now Apt. 4B has its sights set on the Asian and European markets for its next concept shop, expected next year. It will also eventually make its way to New York, but a time line on the East Coast shop is farther off.

The store, which began as a pop-up in 2013 and then another pop-up in 2015, recently got into cut-and-sew apparel with a full launch of that collection — differentiated from the regular collection by the full spelling of Apartment 4B—due out in the spring. The apparel line is expected to remain direct-to-consumer via the Fairfax store and the website for the U.S. market, but wholesale distribution is up for consideration in Asia and Europe.

“We’re in a time where retailers just want what’s hot,” Carmen said. “We just don’t think retailers care enough about what it is that we’re doing. It’s not just a graphic on a T-shirt. A lot of them have a back story and we don’t think retailers want to take the time to train their salespeople to tell the brand’s story. It’s just [about] what’s selling right now. We call it the wave. Whatever the wave is that’s what they [retailers] want to sell. It’s very short-term thinking and we’re in it for the long term.”

The two have found greater appreciation for streetwear brands’ stories overseas, which is part of the thinking behind opening up distribution there.

“The adage is still true over there that if you like it, you buy it,” Moronta said of Asia and Europe. “It’s not about who’s wearing it. It’s about if it speaks to you and that’s a lot of the Apt. 4B brand message. We don’t promo items to artists and things like that.”

Moronta and Carmen have managed to generate buzz and nab the attention of followers partially by keeping them guessing.

One way is via the wall they have separating the view of the actual apartment store from those simply passing by from the street, who only have access to the aforementioned “Macy’s window.”

“You can’t see what’s in here from the sidewalk, so if you’re brave enough to walk through that second door, then you get to experience what it is that we set up,” Carmen said.

The two also hold back from revealing major store events until just days before, arguing if something is disclosed a month ahead of the actual date, it could become stale before it even happens. It’s about adjusting to the Snapchat– and Instagram-fueled digital age while still being what Moronta calls “old school.”

“That goes back to those roots [of discovery],” Moronta said. “Even though everything’s at your fingertips [online] we can still force you to have excitement in the moment….Even for us, in these times where digital brands are being born and people are having huge success online but open a store and then don’t have the success, for us it’s been the opposite. The majority of our business is through this door.”