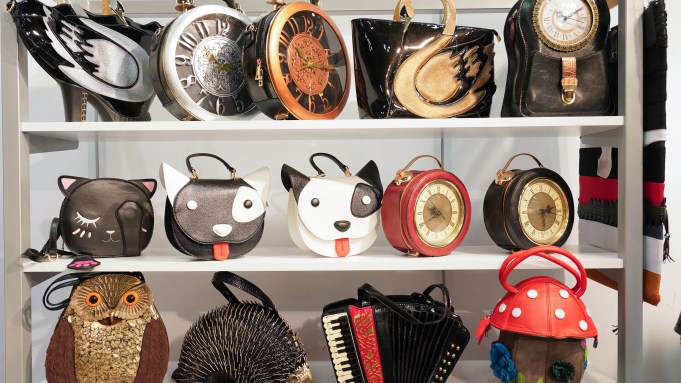 Despite the rise in hand-free shoulder bags and practical carryalls in recent years, novelty handbags were scattered across the Fame and Moda trade shows this week at the Jacob K. Javits Convention Center in Manhattan.

Bags encrusted with rhinestones, beads, feathers, fake fur and other decorative touches were made to look like wine buckets, minivans, porcupines and old-fashioned clock towers, among other things. Guitar-shaped bags from Samuel Dong play music once connected to a smartphone, while designer Anca Barbu’s purses came with hand-painted commentary, such as “This is not a Birkin.” All of them meant to charm the eyes, but rarely intended as functional attire. Some of them could barely fit a cell phone.

That could explain why models carried a variety of pint-sized bags during February’s New York Fashion Week. Like the geometric-shaped bags in Coach’s fall 2020 show. Or the mushroom-shaped bags in Kate Spade’s fall collection.

“A lot of designers are doing novelty, whimsical bags,” said London, who was just one of many fashion companies in town for the trade shows. “You’re seeing it on the runway; you’re seeing it with the major designers. It trickles down and it just keeps getting more and more popular.”

Moda, which features modern, edgy ready-to-wear fashion and accessories, was one of four shows under Coterie, the biannual women’s marketplace. The other shows were Fame, which featured trend-driven looks for Millennial and Gen Z shoppers; the nameplate show Coterie, which had slightly more upscale rtw brands; and Sole Commerce, which featured footwear. The event, which will have its second installment in September, is hosted by parent company Informa Markets.

Hundreds of companies, brands, retailers and fashionistas from around the world made their way to the Manhattan convention center Feb. 11 through 13 — even with the trade shows landing in the middle of New York Fashion Week.

“We have had a great response from our exhibitors and attendees,” said Vanessa Vanni, vice president Women’s Intermediate Markets. “Many exhibitors saw an increase in quality and in the amount of new stores.”

Those exhibitors included names like The Sang, TCEC, Glam, Kancan, Cocobleu and Cotton Candy L.A. at Fame, while Bread n Butter, Dizzy Lizzie, Muche & Muchette, Guzella and Cashmere Clouds were among those to make an appearance at Moda.

In addition, celebrity and entrepreneur Nicky Hilton, “Real Housewives of Beverly Hills” alum Kyle Richards, fashion blogger Wendy Nguyen, men’s wear footwear designer Moti Ankari and a handful of influencers made appearances at the marketplace. The three-day event included panel discussions on things like how to monetize social media and tips on sustainability.

Vanni added that roughly 11 percent of the brands showing at Moda were international, from places like Canada, Poland, Turkey and Peru. Among them was Risk Made in Warsaw, a female-led, Polish-based brand that focuses on sustainable practices.

Retailers — buying for companies like Bloomingdale’s, Nordstrom, Urban Outfitters, Asos, Fashion Nova, Dillard’s and Lulus, in addition to smaller boutiques around the nation — were on the hunt for spring and summer 2020 immediates, as well as fall looks.

“Retailers want something different,” said Melanie Martinez, a sales rep for Miami-based Sea Spice, which makes resortwear. “I feel like they’re a lot of the same things from brands.”

Even so, David Kim, operations manager for Cotton Candy L.A., a wholesale women’s apparel manufacturer, said both cardigans and dresses “have been doing phenomenally well, both here and at MAGIC [trade show].”

While Albert Trujillo, a sales rep for The Sang, a Los Angeles-based wholesale and direct-to-consumer women’s apparel business, said they’re “ready for Coachella and all the festivals,” with floral print cropped tops, bustiers and flowy pants.

Other trends included tie-dye looks, pastels and lots of polkadot prints. Rusty reds, dark gold and hunter green were in demand for fall.

But while retailers were excited about upcoming fashion trends, the season comes with some anxiety for manufacturers, many of which expressed trepidation regarding the coronavirus in China — and what it could mean for business Stateside.

“Of course we’re worried,” said Samuel Dong, president and designer of Samuel Dong. The Secaucus, N.J.-based business, which sells apparel and accessories, manufactures products in China. “But what can we do? It’s out of our control,” he said.

Dong, who was showing at Moda, said his spring 2020 collection has already sold out. But he can’t reorder products until Feb. 20. That’s when the Chinese government anticipates Mainland factories will reopen. There’s still a chance, however, that officials will further delay reopening factories.

“The only thing for us to do is to instead of shipping by boat, ship by air,” Dong said. “That’s going to save us about two weeks, two to three weeks, but the cost is more. Otherwise we have no choice.”

Brands like Kancan, TCEC and Angela Mara also expressed concerns over the virus. But none of them said they’ve been affected yet.

“It just sucks,” said Kim of Cotton Candy L.A. “It’s terrible what’s happening over there. Right now we’re trying to figure out what’s going on, so everyone’s kind of on standby.”