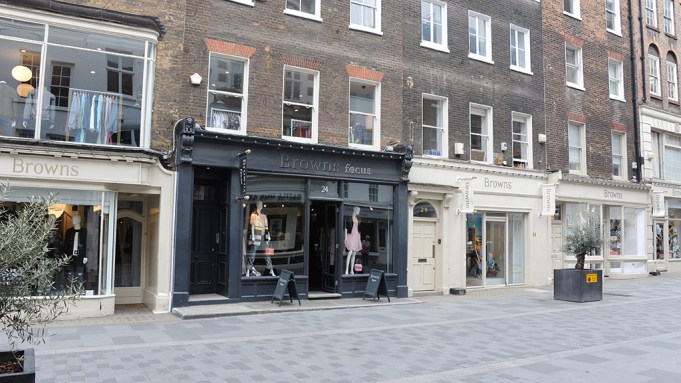 LONDON — In an unconventional fusion of clicks and bricks, the fashion retail platform Farfetch.com has bought Browns, the 45-year-old, landmark fashion store on South Molton Street in London’s Mayfair, WWD has learned.

A statement is expected later today.

Farfetch has big plans for Browns: Its aims are to future-proof the bijou, multi-brand retailer, which was founded and is run by the Burstein family; bulk up Browns’ burgeoning online business, and use the physical store as a lab to experiment with splicing online and offline retail in an increasingly omnichannel world.

“The vision is to answer the question: ‘How will people shop for luxury fashion five or 10 years into the future?’ This won’t be purely online,” said José Neves, chief executive officer and founder of Farfetch.

“The answer, we believe, will be a seamless merger of a fantastic physical experience with powerful, yet subtle, technology. Browns is the perfect partner for this evolution,” added Neves, who declined to provide further details about the specific technologies he plans to apply at Browns.

The terms of the deal were not disclosed, although Neves confirmed Farfetch purchased 100 percent of Browns in cash and shares.

In tandem with the acquisition, Farfetch has created a new business unit called “Store of the Future” to be led by Sandrine Deveaux, whose most recent role was multi-channel director at Harvey Nichols. Her title will be managing director, and her team will be charged with developing and testing innovations in retail technology and omnichannel at Browns before rolling them out across the 300 boutiques that sell through Farfetch.

Joan Burstein opened Browns in 1970 with her late husband Sidney and their son Simon, who is now ceo. Burstein, known in the industry as “Mrs. B,” is the doyenne of London fashion retail, having made her name launching and nurturing designers and labels including John Galliano, Alexander McQueen, Missoni, Prada and Donna Karan in Britain.

“We couldn’t think of a better, more forward-thinking partner to take the reins and respond to the challenges of the future,” said Burstein, who will serve as honorary chairman of Browns.

Simon and his sister Caroline, currently the store’s creative director, will remain as advisers to the business with a seat on the board. Caroline will continue to run the central London shops Browns Bride and Vera Wang at Browns separately.

The new Browns will be run as a standalone business, separate to Farfetch, and the ceo will be Holli Rogers, the former, longtime fashion director of Net-a-porter.com. Rogers’ role will be to “evolve” Browns both online and offline, and the store will also leverage the resources and global technology platform of Farfetch, according to the company.

Farfetch was founded in 2008 by Neves, himself a former brick-and-mortar retailer. It is a virtual shopping mall of independent, multi-brand fashion retailers worldwide. Stores that sell via the site include Browns, L’Eclaireur in Paris, Banner and Biffi in Milan, Fivestory in New York, Candy Sister in Tokyo, D’NA in Riyadh, and Le Mill in Mumbai.

The slick, magazine-like retail site does not hold any stock, and allows users to browse merchandise and purchase directly from the brick-and-mortar member stores.

In March 2015 Farfetch secured a Series E round of investment of $86 million, led by Digital Sky Technologies and existing investors Condé Nast International and Vitruvian Partners participated as well, putting the total amount raised by the company at more than $195 million. This investment valued the company at $1 billion.