Farfetch has lined up Manolo Blahnik as its first monobrand e-commerce partner. 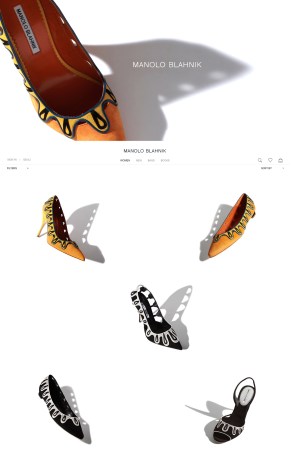 Farfetch is stepping out with Manolo Blahnik.

The eight-year-old U.K.-based retail platform has set up a division that will operate monobrand e-commerce sites for designer brands. Blahnik will be the first.

The designer footwear brand will launch its first global e-commerce destination today at manoloblahnik.com, operated by Farfetch’s new Black & White service. The site will sell the brand’s complete range of women’s and men’s footwear, as well as handbags and books.

The new Farfetch division is a natural extension for the platform, leveraging its global expertise linking independent designer retailers worldwide to do a similar thing for luxury brands themselves. It also is another major expansion move by the fast-growing Farfetch after the purchase last year of the well-known London fashion store Browns.

“We do not look at this in terms of share of the overall business,” Farfetch founder and chief executive officer José Neves told WWD. “We look at it as a holistic answer to the question, ‘How will people shop for luxury fashion in five years?’ We think it’s going to be multibrand online — hence Farfetch.com and BrownsFashion.com – but also monobrand online — hence Farfetch Black & White. But it will also be in-store and this is why we invested in Browns and we have created a retail business unit for continuous tech innovation.”

The online flagships accounted for 10.5 percent of Yoox Net-a-Porter’s pro-forma revenues last year. The gross merchandise value of the goods sold through that channel increased by 27.5 percent, while Yoox’s own revenues from the business rose 19.2 percent to 175.3 million euros, or $194.6 million.

Farfetch is looking to get in on that action.

“The vision was always to build Black & White as a true platform,” said Neves, noting the monobrand business is separate from the main marketplace. “Technologically, Farfetch is built with an API [application program interface] layer, which means we can put all the functionalities you see on Farfetch at the service of the best luxury brands and retailers worldwide.”

He said three additional brands would launch e-commerce destinations on the platform by the end of the summer. He declined to reveal them at this stage.

Farfetch had already tiptoed into the business. Its white label service launched in September with Roksanda Ilincic, AMI, Derek Lam, La Perla and Jason Wu unveiling branded boutiques directly on the Farfetch platform. This gave each brand access to the marketplace’s customer support, click and collect, return in-store as well as a range of customized e-commerce features, from payments to international shipping to Brazil, Russia and China.

Black & White is another step by Farfetch to leverage the strength of its platform and keep pace in the increasingly competitive world of luxury e-commerce. The competitive set ranges from the bulked-up Yoox Net-a-Porter Group to the likes of Neiman Marcus, Lane Crawford and other leading retailers, all of which are ramping up their e-commerce operations as brick-and-mortar sales flag.

The company added beauty and kids’ apparel to its lineup this year and has 10 offices around the world. Stephanie Horton, the company’s chief marketing officer, projected gross merchandise volume on the Farfetch platform would jump to $800 million this year, a more than 50 percent increase from 2015.

Farfetch remains one of the industry’s darlings, having raised $86 million a year ago that gave it a billion-dollar valuation and made it it one of fashion’s tech “unicorns,” along with Warby Parker.

Black & White could mark a significant change for Farfetch and the brands that opt to use the service to expand their businesses.

Neves insisted that Farfetch’s efforts differ from other organizations that offer white label services. With Black & White, partners can choose how integrated a service they wish to use, whether it’s end-to-end like Manolo Blahnik or remaining on their existing e-commerce site, but using the new service to help deliver to China, for example.

As for product, a brand doesn’t need to deliver from a warehouse and can sell product from their store or any inventory point that Farfetch uses to ship. Every service is available in English, Japanese, Korean, Chinese, Russian, Brazilian Portuguese, Spanish, German and French, as are local payment systems, local customs and clearance and logistics support.

“Customers shop in monobrand stores as well as multibrand stores,” Neves said. “It’s a bit like in the real world. The type of experience is different, but both are complementary.”