Pride Month has been raising awareness about diversity and inclusion of members of the LGBTQ+ community, making discussions about women and equality, and drilling through the concrete ceiling, seem all the more relevant. And there’s been plenty of discussion. With women occupying only 4.8 percent of chief executive officer positions at U.S. Fortune 500 companies, the battle — as seen from across the great gender divide — is far from over.

CEO Action for Diversity and Inclusion, the largest ceo-driven business commitment, works with ceo’s and presidents, academic institutions and nonprofits, representing more than 14 million employees. This week, CEO Action is driving its mobile tour bus equipped with Check Your Blind Spots, an unconscious bias tour, to the New Jersey offices of fashion companies such as Ralph Lauren, Ashley Stewart and Tapestry as well as watchmaker and distributor Movado Group. Using virtual reality and gaming technology, the tour gives participants an introspective look at their unwitting prejudices and encourages them to sharpen their awareness to eliminate any lapses they may have.

Shannon Schuyler, leader of CEO Action for Diversity and Inclusion, said the organization in two years, has grown to 700 ceo’s from 150. “We’re seeing a lot more momentum and looking to the future of what our workforce will be. How do we create cultures that are inclusive enough and allow people to have their own identities. The fashion industry is looking at what that means for them in terms of leadership, marketing and customer base.”

In addition to a lack of female leadership at Fortune 1000 apparel firms, the fashion industry has at times been challenged to define who is and who’s not represented on runways during fashion weeks and in advertising. That makes it a strong candidate for Blind Spots, Schyler said.

“The people at the top are men, when 80 percent of employees are women,” Schuyler said. “The men at the table need to help change the culture. Women can’t just be the purchasers, they need to lead. Unconscious bias training teaches employees about the actual customer base. They’re starting to say that when they step back, the picture’s not pretty. There are so many retailers, it’s finding a way to galvanize together.”

“When we founded Tapestry just over two years ago, we asked our employees around the world what values were important to them,” said Sarah Dunn, global human resources officer. “With their feedback, we made inclusivity one of our three values. We’re committing to fostering a company that supports inclusivity, especially when it comes to women.”

According to Dunn, 60 percent of Tapestry leaders at the level of vice president and above, are women, along with 44 percent of the executive committee, and 33 percent of board directors. “Our employee population is predominantly female and our customers are majority female,” Dunn said. “Through our products and services, we strive to give women the confidence to be successful in their chosen paths. We’re constantly looking for ways to evolve and improve to create a welcoming place where everyone can thrive.”

Tapestry recently increased its parental leave program and offers a return to work program for new mothers to help bridge the gap from maternity leave and going back to work.

“We’re thrilled that 60 percent of our leadership positions are filled by women and we’re continuing to look for ways to provide further opportunities,” Dunn said, adding that one of Tapestry’s goals, per its new 2025 corporate responsibility document, is to increase the number of ethnic minority leaders to build diversity in North America Tapestry. 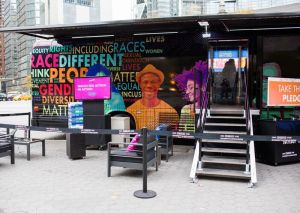 Outside the Check Your Blind Spots unconscious bias tour bus.

“The fashion industry has a responsibility to pay attention to women’s issues,” said Roseann Lynch, executive vice president and chief people officer of Ralph Lauren. “All of our brands were built on respecting individuality, ethnicity, identity and age. It’s all of the above, women of color, and LGBTQ+ women. We launched a gender-neutral Pride capsule with a percentage of each purchase donated to the Stonewall Community Foundation. We’re producing products that are reflective of our values.

“We’ve always had a very large diverse workforce with gender parity,” Lynch said. “Our executive leadership team is 50 percent women, and women hold 53 percent of senior director positions, and above.” The company’s board of directors has a ways to go with four women and 14 men.

“The times we’re in, the conversations become so polarizing for companies and people,” said Lynch, noting that Ralph Lauren since 2001 has had a team dedicated to diversity and inclusion in place. “Having the foundation of a healthy program allows us to have a dialogue more freely. The dialogue in 2001 was different than in 2009, and is different today.”

“The tour is another initiative,” Lynch said. “It’s saying, don’t be afraid of exploring the unconscious, because we all have it. It’s been very eye-opening and encouraging.”

Plus-size retailer Ashley Stewart has “stood behind, promoted and advocated for black women,” said president and chief marketing officer Kristen Gaskins. “Having unconscious bias, you don’t know what you don’t know. We want to make sure we have a diverse workforce and recognize that there could be blind spots.”

The retailer invited its sales associates, district managers and other leaders to take the tour. “Ninety-eight percent of our store managers are women,” Gaskins said. “The challenge for them is, how do you lead a mix of full- and part-time associates. They see themselves as potentially being promoted. We have a clear trajectory for them. They’re driving the sales.”

Ashley Stewart has seen a demand for a better balance between work and life. “We’ve had to talk about working from home,” Gaskins said. “The retail industry wasn’t first in line and probably isn’t as quick to react. We’re finding the younger generation wants a more flexible work style. Flexibility has been something we’ve had to become more aware of. It’s more about balance than advancement for them.”

“We have 20 people going to the bus tour,” said Efraim Grinberg, ceo of Movado. “The whole company will take an unconscious bias training course. We think it’s very important. People have innate biases that they grow up with. We give voice to all people and do a lot of dialoguing, round table discussions and internal activities.”

“Our leadership and senior management teams are extremely well balanced, 50-50, and the same goes for our brand leaders,” Grinberg said, who nonetheless acknowledged that the company’s board is lacking. Movado’s only female member, Margaret Hays, former president and ceo of Fashion Group International, died in February. “We intend to add another woman this year,” Grinberg said of the eight-man board. “We need to get more balance. We are focused on changing that.”

Grinberg announced employees can work from home 10 days a year, after leaning in to their concerns. Shared personal experiences have helped him empathize with the staff. “We’ve always focused on achieving a good work-life balance. I was a single father,” Grinberg said. “I brought up my kids myself and understood the commitment that would take. I made sure other people in the company would be able to do that as well.”