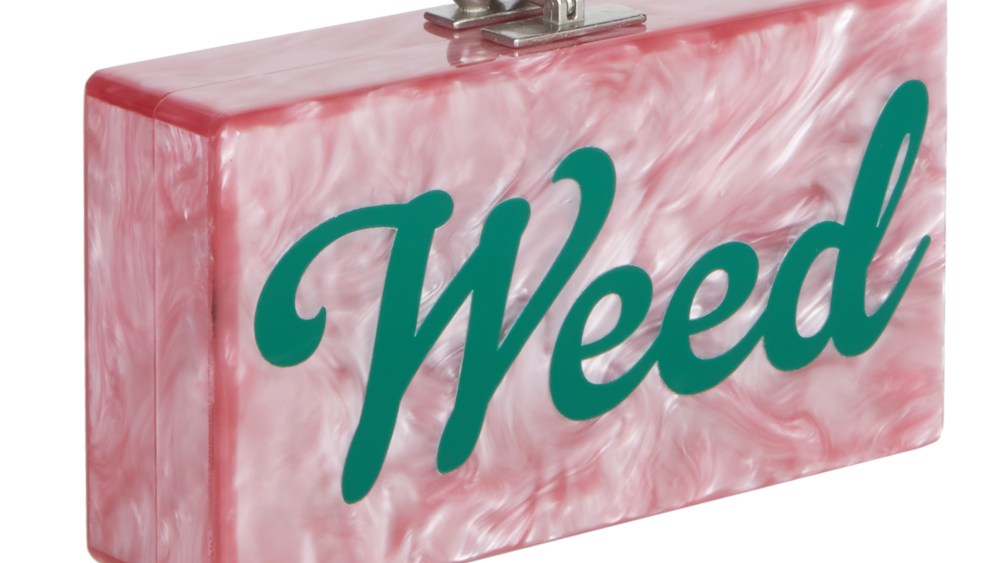 Marijuana legalization advocates aim to make sure the inauguration ceremony of our 45th president will be “lit.”

Led by Adam Eidinger, founder of DCMJ, which was established to help decriminalize marijuana in the District of Columbia, the organization will hand out thousands of free joints in a nod to the popular “420-friendly” moniker and encourage recipients to smoke during the inauguration. With a wave of states ushering in legalization laws, the pot-in the-mainstream era is here — and it will potentially affect many industries, including fashion and retail.

Designers have already begun to embrace the current iteration of the movement, sporting the cannabis plant on their designs or creating fashion products around its use. But as the industry surrounding the growing legalization continues to boom, will the market witness a landslide of merchandise around it? It also begs the questions of how traditional retailers will react.

Designers have not been shy about the trend. A slew of them — including Alexander Wang, Vetements and California-based jeweler Jacquie Aiche — have  jumped on the Mary Jane train. Wang undoubtedly is the leader, with his fall 2016 collection giving off one of the most direct streetwear vibes in recent seasons and featuring a pot-leaf print on clothing and accessories. He said it wasn’t love at first sight, though, when it came to retailers placing orders. According to Wang, there was “a lot of hesitation in communicating the message to stores.”

But, he said, “I’m glad to see this is a movement that I share among many other creative [types],” citing, for one, actress Margot Robbie, who wore one of his leaf-print motif dresses during the opening monologue of the “Saturday Night Live” season opener last October. Wang added to the discussion for spring when he introduced a more functional item in his collection: a roach-clip necklace, complete with mini-Bic lighter cover. Bic sponsored the designer’s show and notorious smoke-filled after party — though it winced at the connection in an article posted on WWD.com.

Retailers were, for the most part, mum on the subject, even the ones who bought into the items such as Saks Fifth Avenue, Nordstrom and Farfetch. Even Barneys New York — whose e-commerce site offers the most marijuana-themed merchandise, with stock from Wang, Gelareh Mizrahi (bags) Del Toro (slippers) and Bianca Pratt (jewelry), among others — declined to comment. Wang’s leaf-print collection appeared to be most widely received by major retailers, which tended to favor printed leather handbags ranging in price from $295 to $650, or printed silk blouses. By early January, product was either sold out, as was the case at Saks and on Wang’s own site, or heavily discounted, like a large portion of fall goods on the Nordstrom site. Neiman Marcus, which carries ample Wang merchandise but passed on the leaf print, only dipped into the category with a “cannabis scented candle” last year. Those who did carry pot-themed products never explicitly referred to it on their web sites, save for the Gelarah Mizrahi “ganja” description on her python clutch. Words such as pot, marijuana and cannabis were noticeably absent from web site descriptions and even the designers’ line sheets.

The latest pre-fall collection from Creatures of the Wind featured the plant on a series of hand-embroidered pieces, notably a military-style shirt jacket. Its designers, Chris Peters and Shane Gabier, were surprised to see retailers gravitating toward the leaf motif over the other more feminine designs, like the Renaissance theme or other botanicals, like daisies. The designers attributed that to buyers’ attitudes. “As the substance isn’t legal in all 50 states, I feel the plant design has an edgy appeal due to its illicit nature,” Peters said.

Retailers, especially independent specialty boutiques such as Ikram in Chicago, Capitol in Charlotte, N.C., and Just One Eye in Los Angeles, translated that appeal to actual orders. The larger chains that carry Creatures of the Wind, Saks and Neiman’s, did not place orders for the marijuana motif. This could have to do with specialty stores being able to express a more personal point of view and buy pieces with an exact customer in mind. Gabier noted, “If you are an independent boutique, you have more freedom to express your personal agenda, politics or feelings in the buy. You are a lot more free than a department store in that regard.”

He added that there are many details that affect whether a store buys into a particular piece in a collection, adding the same can be said for silhouette, color, print and price. By and large, though, Gabier feels specialty stores are looking for strong statement pieces, and that could be one reason (beyond a store being pro-420) that the highly elevated and executed motif took off. Peters offered that historical controversies around marijuana could still keep others away.

Brett Heyman of Edie Parker had a similar experience with a bag from her spring garden-themed collection with “weed” etched across the front panel. The designer said, “All of our collections tend to have a ‘wink-wink” double-entendre mood.” For instance, the words “dirt” and “herb” also appeared in that collection. Though the bag performed well on social outlets like Instagram and retailers such as Net-a-porter responded positively, it still proved “too controversial” for some of Parker’s bigger accounts, according to Heyman. Only smaller independent web sites like Forward.com or boutiques such as Reservoir, Her Store and Elyse Walker, all California-based, also bought the design. Heyman said she understands the reluctance — since using and possessing marijuana is still a crime in most places — though her personal beliefs are different. “I’m all for legalization [of marijuana],” she said. “It’s medicinal, it doesn’t make people violent and it’s a natural substance. The number of people dying from opioids daily is a real problem.” Not that she promotes drug use, she quickly added. She also mentioned that this wasn’t her first foray into pot-themed products, as she created Edie Parker merchandise for Moda Operandi, as part of the retailer’s customization program, including a custom bag with the Roman numerals for “420” for its site in 2013.

The concept of using the plant motif on designer goods goes back to at least 1997, when Lucien Pellat-Finet offered it on a pricy cashmere sweater. It made quite an impression as a signature piece in the pre-digital era, when the leaf motif was found mostly on “bad quality T-shirts sold along St. Marks Place,” according to Pellat-Finet. He claims it did a lot for acceptance of  marijuana at the time, as well as the cashmere sweater, which was on the cusp of status-hood in the late Nineties, when conservative, less-casual styles prevailed. While pot as a clothing theme was still more controversial in 1997, Pellat-Finet’s  personal experience with it dated back to 1968, when he found pot to be “natural, cool and relaxing.” In his opinion, the drug was well-suited to the upper classes who could afford his colorful, fun cashmere sweaters, which were in contrast to the Nineties’ minimal movement. Despite the touchy subject matter, Pellat-Finet said he sold the $1,500 sweaters in tony boutiques such as Barneys, Janet Brown, Maxfield and A’Marees. It became an instant status symbol among fashion’s cool crowd. Ironically, he could not sell the sweater in his native France at the time; he could face fines for promoting an illegal substance. “It’s still shocking to me,” Pellat-Finet said.

Clothes and accessories with the marijuana motif aren’t alone. Products such as the Vetements “grinder” necklace and Wang’s roach clip are among the functional items out there, and Annabis is a leather goods line created by former marketing executive Jeanine Moss. The primary concept of the bags is to conceal the pungent odor often associated with marijuana, presumably the first to do so with an on-trend fashion aesthetic. By hiring veteran designers with experience at brands including Coach, Halston and Nordstrom, Moss hopes to offer a stylish alternative to the functional but hardly fashionable pot carrying cases found at typical head shops. The prices as well as the designs are accessible and geared toward a mass-fashion consumer. “Our goal is to own the zone of fashion and function in the cannabis space, much like Lululemon owns fashion and function in the yoga space,” Moss said. Still, when it comes to retail, Moss said they have focused on smaller boutiques for the moment, presuming in time the larger chains will come around.

Jacquie Aiche ventured into the space 10 years ago, noticing a demand that was in line with the pot-friendly California culture she grew up in. She launched her Sweet Leaf collection in 2007 with a single pavé stud earring in the shape of a marijuana leaf. The line has since grown to include leather goods and collaborations with clothing brands like Mother that don leaf patches. She said people who don’t even smoke pot gravitate toward the style theme. The collection is carried at Broken English in Santa Monica, Curve in Los Angeles and Baby Buddha in Paris, as well as on her own e-commerce site.

While Saks carries her regular fine jewelry, Aiche said she has yet to approach some of the more mainstream retailers about the leaf collection. Still, she feels the time is right to expand and is making plans to grow the Sweet Leaf collection later this year to include reworked vintage watches with the plant motif as well as a line of sweatshirts and T-shirts in the same vein. Aiche said she has been “waiting for the moment” when market demand for high-end goods based around and for use with marijuana arrives. Aiche puts a luxe spin on two common pot accessories; the “doob tube” a storage item normally made from plastic, and a Bic lighter cover made from watersnake inside a small clutch wallet for nights out on the town. The set retails for $2,400. She plans to expand the smoking accessories by creating a luxe case for vaporizer pens as well.

She admits there is reluctance by some retailers to embrace it. “The name Sweet Leaf was a code word, between my metalsmith when we made the earring as he was not comfortable using terms such as pot or marijuana.” Still, Aiche said, now, “It’s like the ‘Wizard of Oz’ when all the little people come out from behind the curtain.” She hopes people can accept the legalization and casual use of pot and “move on to bigger issues in society.”

For all the progress that’s been made, it remains unclear where the trend is going. With a new administration on the horizon, the legalization movement could face resistance. If Jeff Sessions is confirmed as Attorney General, there is some speculation that state-by-state legalization may be one of the issues he tackles. If that happens, the trend toward pot-related merchandise could turn out to be just a temporary high.