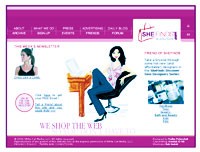 First there was Daily Candy. Then came The Budget Fashionista, StyleBakery, SheSheMe, She Finds, Chic Shops, BussBuss, Style Chronicle, Celebrity CopyCat and Personal Shopper. These only-in-cyberspace fashion Web sites offer everything from shopping advice to lists of sample sales to Web bargains to personal shopping. Some are editorially independent, and some have little purpose beyond flogging product.

In the business, they’re known as affiliate sites, and they’re an important driver of apparel sales online, in some cases accounting for as much as 15 percent of revenues. They compete with ads, search, e-mail and virtual malls such as Amazon’s apparel stores for marketing dollars from online retailers such as macys.com, jcrew.com, jcpenney.com and eBay.

Here’s how it works: Most retailers pay a fee to a middleman, such as LinkShare, ValueClick or Performics, to administer their affiliate programs. LinkShare, for example, charges the merchant 2 to 3 percent of every sales transaction. Affiliates sign up for the programs on the merchant’s Web site or at the Web sites of the service providers. Retailers approve the affiliates they want to work with and negotiate what percentage they’ll pay for sales and, in some cases, fees for driving traffic to their sites. The affiliate network administrators track every link, placement and ad. They issue reports and cut checks to the affiliates every month.

Fees can range anywhere from 1 percent to as much as 25 percent for expensive merchandise such as jewelry, according to Stephen Messer, chief executive officer at LinkShare. Fees for apparel usually fall into the 5 to 15 percent range. For example, Gap and Land’s End both pay 5 percent of a sale. Elisabeth, Liz Claiborne’s plus-size brand, pays affiliates as much as 14 percent of a sale.

For retailers, affiliate programs can help them reach new customers and niche markets they might otherwise overlook. Theoretical examples of such niches could be bargain shoppers or moms or any group of people whose style sense clicks with a particular affiliate site. Affiliate programs have been especially helpful to retailers such as Overstock.com that are only online and don’t have brand recognition or physical stores, said Forrester Research analyst Carrie Johnson at a LinkShare conference panel in June in New York City.

In its annual survey of Internet retailers in all categories, not just apparel, The E-tailing Group Inc. of Chicago found that on average 9 percent of online sales come from affiliates. Online retailers also ranked affiliate programs as eighth in importance out of a broad-ranging list of 39 features and functions, including keyword search and e-mail.

“Affiliates are important,” said Kent Anderson, president of macys.com. “We tested it. We found it to be very productive. The areas of the [physical] stores that have commissioned salespeople are the fastest growing, and I think there’s an analogy there. The affiliate program is a wonderful program from the perspective that you’re putting commissioned salespeople out there.”

He added that gross margins are higher on full-priced apparel, so Macy’s can afford to pay double its usual commission for sales of full-price goods and still make a return on investment. “We use our affiliate network to help sell fashion, not price,” he said.

Sales through affiliates “are a very significant portion of our online sales,” said Dan Sackrowitz, vice president of marketing for Bare Necessities. The retailer sells innerwear such as Wacoal, DKNY and Cosabella through its seven stores, one of which is online. In any given period, 5 to 15 percent of online sales come through affiliates. “It’s one of our most important sales channels,” he said.

SheFinds recently ran an article on foundations, and linked directly to one of Bare Necessities’ top-selling bras. “It’s a mix of advice and commerce that works well,” Sackrowitz said.

At the height of the dot-com boom, there were fewer affiliates, and most were venture-backed fashion “malls” such as fashionmall.com, he said. Now the typical apparel affiliate is much more likely to be a small content site run by one fashion maven and sometimes a support staff of one or two people.

DailyCandy, started by Dany Levy in 2000, was the original, and began as an insider’s guide to New York fashion, restaurants and culture. There are versions for other cities, including Chicago, which launched in May, and one for kids. Each day, the site offers “Today’s Candy,” which might mention and link to a hot new restaurant or indie designer. Levy recently blurbed Built by Wendy’s designs for Wrangler and sequined ribbon belts from designer Shelly Steffee, who has a store in New York’s Meatpacking District. Editorial is king here. DailyCandy separates editorial content from advertising, and “Sponsored Links” are clearly marked. Recent ones have included Rodan + Fields skin care and specialty retailer Henri Bendel. The site no longer participates in affiliate networks, but instead sells all its advertising directly because it can command higher prices, said Danielle Romano, DailyCandy editor at large,

In February, Michelle Madhok launched SheFinds for the time-starved career woman. Madhok previously worked in marketing at Time Inc. and AOL. The site’s motto is “We shop the Web so you don’t have to.” SheFinds is more mainstream in its outlook than DailyCandy, with links to brands and retailers such as DKNY, Delia’s, Gap, Nordstrom and Urban Outfitters. SheFinds isn’t big enough yet to be a full-time gig for Madhok, but some of the sites, particularly ones that have additional income from advertising or other endeavors, do turn into full-time jobs.

Kathryn Finney was a Yale-trained epidemiologist with “a love of shopping and a lack of funds,” as she put it. Her husband, a graphic artist, urged her to create something that would be an outlet for her interest, and so she started The Budget Fashionista last year as a place to talk about shopping strategies and budget tips. Favorite retailers to link to include Target, Bluefly and Old Navy. Now the site gets 80,000 visitors a month and has 10,000 subscribers to its newsletter. Finney is the full-time “chief shopping officer” for the site. She consults to mass merchants that want to reach discount shoppers, and she’s working on a book about bargain shopping called “The Budget Fashionista,” tentatively slated for publication in 2005. She’s also in the process of launching two more sites, including one for male bargain shoppers, called The Bargain Manista.

Her many years as a struggling student and then as a professional traveling the world and running a nonprofit gave her insight into how to put together a whole wardrobe with $200 or less.

“We’re normal people,” she said of her growing staff and advisory board members, who pass on tips about shopping in their areas. “I don’t come from a strong fashion background — I had to struggle like every normal person to look fabulous in a corporate environment with virtually no funds. So I very much understand where our readers are coming from.”

The success of the site has freed her to do what she loves. “I was a scientist by day and a fashionista by night. It was a whole Dr. Jekyll and Mr. Hyde deal,” she said. “But my real passion is fashion and shopping and being able to marry the two. There’s nothing like getting paid to shop. It’s a dream job.”