In an interview with WWD, Osamu Yunoki, ceo of the eight-year-old label, said the brand has plenty of untapped potential both in Japan and abroad.

By Amanda Kaiser and Casey Hall and Kelly Wetherille on May 12, 2014
View Slideshow 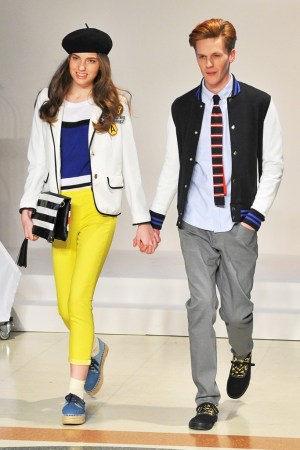 TOKYO — As Fast Retailing embarks on its journey to become the world’s largest apparel retailer, it has a secret weapon — a fast-fashion brand it has quietly developed into a substantial chain of stores in Japan with ambitions for overseas growth that echo those of its flagship Uniqlo brand.

The retailer’s eight-year-old label called GU, which takes its name from the Japanese word for freedom, “jiyuu,” is growing rapidly in terms of sales and storefronts. Clearly taking aim at Hennes & Mauritz, Forever 21 and Zara, Fast Retailing is positioning GU as a fast-fashion player that pumps out low-priced, trendy clothing with a quick turnover. While GU’s current focus is still very much on Japan, it’s clear the brand sees its potential to become a contender beyond its home market, particularly in Asia. Currently GU counts just one international door in Shanghai but that is set to change. On Tuesday the brand will stage a fashion show in Taipei and announce plans to open two stores in that city come fall: one in the basement of an exiting Uniqlo flagship and a second freestanding location in a shopping mall.

Osamu Yunoki, chief executive officer of GU, said the brand has plenty of untapped potential both in Japan and abroad. By the end of August, Fast Retailing expects GU to have 277 GU stores in Japan and post 100 billion yen, or $983.5 million, in annual sales. In comparison, Uniqlo Japan is expected to have 857 stores and on track to post sales of 715 billion yen, or $7.03 billion.

“In Japan, I think we’d be happy if we could get to the point where we have about the same [number of stores] as Uniqlo,” Yunoki told WWD in an interview.

The executive said GU has just as much potentially internationally — although clearly that will take time as Uniqlo plans to have 632 stores around the world, slightly less than half of them in mainland China, by the end of August.

“I’ll be careful not to surpass Uniqlo,” he said with a laugh.

Yunoki said GU’s Shanghai location, opened last year in the basement of a Uniqlo flagship, is performing well. The executive said GU is looking at the possibility of opening more stores in mainland China as well as Taiwan, Hong Kong, Southeast Asia and South Korea. Eventually, GU might consider western markets once it has gained a foothold in Asia, he said.

Although he admits the fast-fashion market is crowded and competitive, Yunoki said he thinks GU is unique. Unlike other American and European brands, its Tokyo-based design team interprets global trends with a Japanese sensibility.

GU is still a relatively small part of the Fast Retailing empire but it is growing quickly. GU’s income and sales for the first six months ending February came in slightly below target- the company blamed a poor performance for outerwear and heavy discounting- but it upheld its full-year forecast for the brand. Fast Retailing said GU’s sales will grow at least 19 percent top 100 billion yen, or $983.5 million, for the year ending Aug. 29.

Fast Retailing has outlined ambitious plans to become the world’s largest apparel retailer and reach its long-standing annual sales target of 5 trillion yen, or $49 billion, by 2020. While the market anticipates the Japanese giant will need to make one or more acquisitions to reach that goal- most recently sources said the company was in talks to buy J. Crew before its interest cooled- Fast Retailing chairman, president and chief executive officer Tadashi Yanai has emphasized the importance of growing his existing businesses.

“Rather than acquisitions, organic growth is what we aspire to achieve,” Yanai said last month as Fast Retailing kicked off a secondary listing for its shares in Hong Kong.

It has taken a while for GU to find its current positioning. When Fast Retailing launched GU back in 2006, it tried to emulate Uniqlo’s model of turning out family-friendly basic apparel but at an even lower price point than the already affordable Uniqlo. The strategy did not catch on as consumers came to see GU as a copycat, cheaper version of Uniqlo.

“If you just aim for cheapness, there are a lot of other things aside from GU, so you can’t differentiate yourselves in the beginning,” Yunoki said. “Another thing is that you can’t create a hit by being ‘like’ something else.”

Over the next few years, GU tinkered with its format. Yunoki said he spoke to young women working in GU stores to get their opinion on what they as consumers wanted.

“What I heard was that at these low price points, they want to have fun with fashion, even if it’s a trend they’ll only wear this year, they want to buy it right now,” Yunoki said.

GU shifted gears to become more trend sensitive, putting out monthly installments of new merchandise, tapping into specific themes like cowgirls, marine stripes and punk. Yet the clothes, for both men and women, have a distinctly Japanese flair to them. The women’s looks are cutesy and feminine, in keeping with the images found in local fashion magazines and the merchandise populating the floors of iconic department store Shibuya 109. But GU’s prices are definitely cheaper, with pants and tops coming in at 990 yen, or about $9.74, and jackets coming in at 2,990 yen, or $29.41.

GU made the fashion jump in 2011 and saw a significant spike in sales after that. Sales in fiscal 2012 grew about 80 percent to 58 billion yen, or $736.6 million at average exchange rates for the period.

Fast Retailing is quick to point out that it took Uniqlo 15 years after opening its first store in Hiroshima to break the 100 billion yen threshold while GU is on track to do it in 8 years. Although it’s important to remember that GU is able to leverage the prowess of Uniqlo when it comes to low-cost manufacturing and securing real estate for stores.

Yunoki said that GU has learned a lot from Uniqlo and its rapid expansion. The executive said the two brands will seek out store locations near one another as much as possible and there is little risk of serious sales cannibalization as Uniqlo deals in basics while GU chases trends, he said.

“Before, when Uniqlo and GU had stores next to each other [and GU was dealing in cheap basics] we had some cannibalization, but now there is more synergy. Both are doing well,” he said.

GU is eager to tap into Japan’s unique celebrity and street fashion culture- a move that distinguishes it from Unique. Model and pop star Kyary Pamyu Pamyu, who is known for her colorful and cartoonish Harajuku fashion sensibility, served as the face of the brand for about a year through August. This spring, the brand teamed up with coquettish model and television personality Rola for a romance-themed television commercial featuring images of couples kissing.

GU’s Japanese identity and low price point could resonate with consumers elsewhere in Asia but it is still relatively early to gauge the brand’s impact with just the one store in Shanghai, according to analysts.

“Uniqlo has done a very good job of developing brand credibility [in China], it helps the brands to be positioned next to each other because otherwise people wouldn’t necessarily know what it was. In fact, if they sold it on its own, without that relationship, I don’t think people would be as excited to buy it because they wouldn’t know what it is,” said Benjamin Cavender, senior analyst at China Market Research Group. “It might take a while to get a lot of momentum, but I think it will.”

James Button, senior manager at Shanghai-based strategy consultancy, SmithStreet, said he sees particular growth potential for fast-fashion brands in China’s tier-two cities, where there are not as many shopping options. But he said GU needs to build credibility in the market first.

“To say they’ve coming in quietly is an understatement. They have not made a splash the way a brand needs to if they’re going to really establish themselves,” Button said. “A good comparison would be Forever 21 coming in with a very prominent flagship store, which announces, ‘We’re here, this is who we are.'”

Yunoki himself admits the brand still has some areas it needs to work on. For starters, the brand is still developing a retail presence in Japan’s key shopping neighborhoods. GU had 250 stores in Japan at the end of February but still had no storefronts in either of Tokyo’s youth fashion hubs of Harajuku or Shibuya.

That will change in June when GU will open in the Parco shopping complex in Shibuya. The brand will add another 26 stores in Japan by the end of August. The company is not disclosing an investment figure for the brand’s retail expansion.

“Compared for example with Zara, we are a little slower, but we don’t see something and sell it as-is. We see the trends, interpret them, and then place our orders. We [design] with a mixture of trends and originality,” he said.

GU is still relatively small in scale compared to H&M or Zara and it is working to speed up its design and manufacturing process as it gains scale, a spokesman said, adding that GU uses its own suppliers separate from Uniqlo. GU does most of its sourcing in Cambodia, Indonesia, Bangladesh, China and Vietnam.

GU’s operating margin, which came in at 9 percent last year, might seem low compared to other fast-fashion players. H&M and Inditex enjoy margins closer to 17 or 18 percent.

Yunoki said the company’s margins have come under strain recently, with the higher cost of labor and cotton and a weak yen’s reduced buying power for raw materials. He said the company needs to work on cutting costs but it also needs to do a better job of coming up with hit products for which consumers are willing to pay full price.

“Of course we need to reduce production and factory costs, but at the same time labor costs are increasing, [the price of] cotton is increasing, and the yen has weakened, so things are quite difficult,” he said. “So we are also trying to lower our discount rate by increasing our salability.”