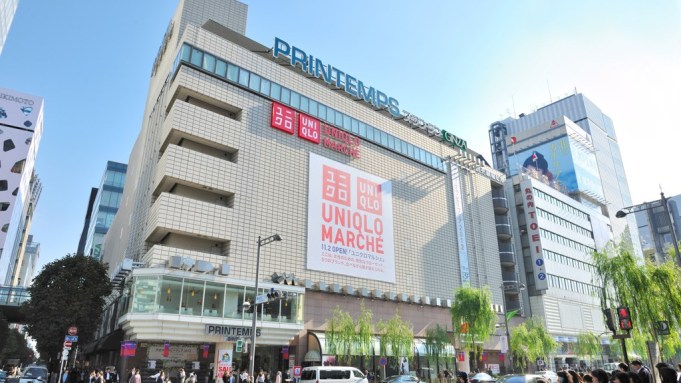 TOKYO — Fast Retailing Co. Ltd. has unveiled its latest retail concept — a two-story store that combines several of its brands under the roof of the Printemps Ginza department store.

“I think there are a lot of people who, until now, haven’t known that our company has these different brands, and I think these brands will be successful not just in Japan but also globally,” Fast Retailing chairman, president and chief executive officer Tadashi Yanai said Thursday, adding he would consider rolling out similar retail formats elsewhere, possibly in other countries.

The new store brings a bit of attention to the Japanese group’s other labels, which tend to live in the shadow of the larger Uniqlo business. Fast Retailing groups these non-Uniqlo assets into its Global Brands division comprising Theory, PLST, G.U., Comptoir des Cotonniers and Princesse Tam Tam.

“It’s only been six years since [the brand] was born, so I am extremely happy that we are able to open a store here alongside [other Fast Retailing group brands],” said Osamu Yunoki, ceo of G.U.

“Japan is important because we are part of the Fast Retailing Group. How can we enter and not succeed in Japan?” she said, adding that there are plans to open more Princesse Tam Tam stores in Japan but it is too soon to quantify how many.

Both brands are heavily exposed to a challenging European market, but Cunin said they did well given the circumstances thanks to loyal customer bases and strong brand images.

Princesse Tam Tam, which has a wholesale presence in New York at Bloomingdale’s, is planning to open its own stores in the city over the next few years, said Pierre-Arnaud Grenade, director general and chief operating officer of Princesse Tam Tam.