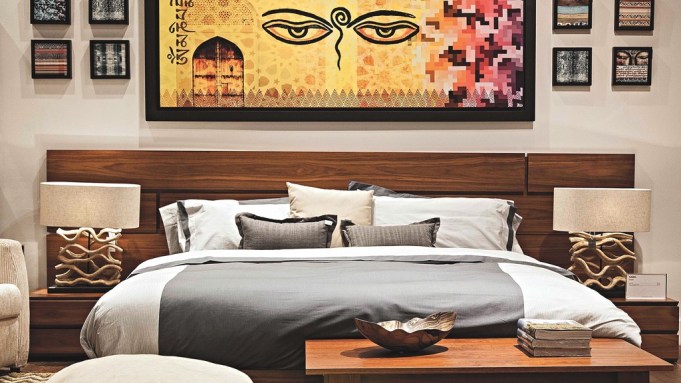 From the $20,000 sauna room to the $250,000 Baccarat chandelier by Philippe Starck, Casa Palacio is thoroughly upscale, inspirational and occasionally over the top.

“The chandelier is beautifully designed with an umbrella at the end” serving to contain the light, noted Ignacio Reynoso, director of Casa Palacio. “It’s our most expensive item.”

The showrooms and selling floors of the two Casa Palacio home stores feature a comprehensive assortment covering the gamut for the home. The range includes not only Ralph Lauren and Missoni furniture and soft home products and Sub-Zero and Miele kitchen appliances, but also Loro Piana fabrics, salsa makers from Emilia Castillo, Nespresso coffee makers, room sprays from Durance, 85-inch Samsung televisions on special order, $18,000 furniture pieces carved from a single piece of wood and a marketplace for silk plants and flowers.

There’s also a sprinkling of whimsy in the product and the presentation, like billiard tables that convert to dining tables, French bookshelves in the form of polar bears, chairs suspended from the ceiling and quotes from famous people posted on the walls.

In February, Casa Palacio will introduce luxury mattresses by Hastens.

“One mattress can cost you $50,000,” Reynoso said. “No, I didn’t buy one. I tried one and they are really great.…Actually, we have a range of prices. We want to offer the best, and that includes more accessible items. We are aspirational in many ways. People would love to see this mattress, but at the end they wouldn’t spend this much necessarily. We also sell mattresses that cost $600. There’s a huge range.”

“That Philippe Starck piece is inspired by Mary Poppins,” said Bibiana Guzmán, Casa Palacio’s vice president, during a tour of the Antara store, which has 64,768 square feet of selling space. “Maybe in the end it gets sold to somebody. It’s a collector’s item. We do carry some strange things that our customers like to see, even if they don’t buy it.”

Guzmán takes a guest through all the shops and vignettes, past the sauna, which she noted can be customized with different measurements, through electronics, kitchen appliances, tabletop, elegant bedding and even the housekeeping section for storage and cleaning. “You can find affordable products here,” Guzmán said, underscoring the range. “On the main floor, we don’t carry luxury. Luxury is upstairs,” while at the Santa Fe store, which has 74,874 square feet of selling space, luxury is mixed throughout. “The product placement is very different,” she explained. “For Versace, you would have to go to the Santa Fe store. Fendi or Driade, you can buy here. Baccarat is at both stores. There is a 60 percent overlap.”

When customers visit one store, they can see what the other one carries through the computer system. Casa Palacio also sells online and through its catalogue.

“What you see in the stores is a small percentage of what we have in the catalogues, which have huge selections,” Reynoso said. “That’s why it is very important for our interior designers to show clients all the possibilities they have even with the same products. Everything can be personalized and customized with different materials and finishes.”

Casa Palacio opened its first store in the Antara section of Mexico City seven years ago, and the second in the Santa Fe section just last April. One or two more could open in Mexico City, and other Mexican cities are being eyed.

“Since 15 years ago, we have seen this movement all over the world — the home assuming greater significance,” Reynoso observed. “We have seen many fashion brands going into the home area. Presenting the whole lifestyle has become much more important. The first was Ralph Lauren, then Fendi. Then Missoni. Everybody got into it,” which encouraged El Palacio to launch the separate home stores.

“We have seen big stores like Bloomingdale’s and Galeries Lafayette giving a different form of expression to the home area. In a department store, you are constrained. You cannot express all you would like to express in the home area.” Now Casa Palacio is a specialist in the area, mainly with big players from the interior design scene.

“When the planning began eight years ago, we decided that we could do something different from everybody, something different for the home in all categories — electronics, decorative, paintings — everything,” he added. “And we have been learning a lot. At first, we were tempted to be more volume-oriented, like Crate & Barrel or Pottery Barn or Habitat. Then we said we have the opportunity to be upscale and to work in this segment of this market. Unfortunately, in Mexico, we have big social and financial differences [in the population]. But there are many rich people, and they have been going to the States to shop, with their interior designers or architects. Now they have the opportunity to do it here.”

Reynoso said Casa Palacio is virtually unique in Mexico, though he did say there are some smaller competitors that carry high-end brands on a much smaller scale, like Roche Bobois. “We are the biggest and in that [sense] the most important one. You could say we are leaders.”

From the opening of the Antara store to the Santa Fe debut, “There has been an evolution of the concept” so Casa Palacio targets two kinds of clients: one who comes to the store to buy for himself, and the other, a professional interior designer with clients. “We have 300 interior designers registered in our special program to help them with their projects.”

Casa Palacio also has a bevy of in-house designers, 12 in Antara and 18 in Santa Fe.

Asked how the stores were performing, Reynoso said that since its opening, the Antara unit was growing at a double-digit pace, although this year, as government spending has dropped with the change in the ruling political party, the store is up about 5 percent.

He acknowledged that with the new Santa Fe store just six miles from Antara, “Now we are a competitor to ourselves. Even with 22 million people in Mexico City, we don’t have such a big market. But Santa Fe is developing a lot and becoming more important. We believe both stores are going to do very well. We are very happy with the results at Santa Fe.”

Reynoso said the best performing and main business in the store is furniture. “The big brands, of course, are doing well,” he said.

With future openings, “We already have a site selected in a mall in the south part of Mexico City, in Pedregal. I think it’s going to take two or three years to open, to get ready when the mall gets ready to open. The other [in Mexico City] we still don’t know. Outside Mexico City, we have plans to open stores in Guadalajara, Monterrey and Puebla.”

To educate consumers, “We present a lot of trends. We try to change our stores four times a year, to represent new trends. With our [in-house] interior designers, we train them with information about what’s going on. Right now, everything is about materials and how these materials can be used in different ways. For example, wallpaper is coming back. It’s very hot now, and you have many kinds of wallpapers. You see many different materials, a lot of textures. Mixing materials is very important. You can have silicon and plastic mixed with very natural materials.

“Another big trend is about respecting nature, respecting the planet. We have many products reflecting this. We have organic sheets and bedding. Everything is organic — the coloring, how they treat the products and the packaging. That can be more expensive, but there are people eager to buy these products. They think they have to live in a different way.”

Next year, Casa Palacio will spotlight design “from every point of view,” Reynoso said. “For example, we will be talking about young designers and the way they see things. We will talk about brands that hire different designers for their collections.”

Lladró, known for its porcelain figurines, hired a batch of new designers to take the collection to the next level. “They have created chandeliers in porcelain. It’s something spectacular.”

Yet the mood is right, Reynoso suggested.

“Around the world, not just in Mexico, the environment is getting increasingly aggressive. So we’d rather stay home and do different things, entertain our friends. We spend a lot of time at home, and we want to make it quality time there and have the best for ourselves there, instead of showing off outside.”

Aside from extending invitations to visit their homes, people to a greater degree are pampering themselves with finer things and experiences, Reynoso observed. “We are selling that sauna. People are looking to indulge.”