For the first time in recent memory, fashion week got high marks from an overwhelming number of retail executives.

Joyful isn’t a word that’s often associated with the semiannual rite that is New York Fashion Week, yet more retailers than in recent memory used it to describe the spring 2020 shows and presentations that ended on Wednesday.

With the number of days shortened to an official five (although it was more like seven including the NYFW: The Shows schedule overseen by IMG) from the usual nine or 10, the schedule was compact and streamlined — even if it did have buyers and press scurrying from one far-flung locale in Brooklyn back to the West Side of Manhattan and then back downtown. Runways were full of color, and trends such as tailoring, head-to-toe dressing, and handmade and artisanal details were seen as dollar signs at the cash register.

“I really enjoyed this season,” said Elizabeth von der Goltz, global buying director at Net-a-porter. “It was definitely one of the best in recent years. It did a great job of setting the momentum for the rest of the month. The week had great upbeat energy and beautiful shows.”

“The week made a great statement for American fashion,” said Jeffrey Kalinsky, designer fashion director at Nordstrom. “The new schedule made New York Fashion Week much more impactful. You got a lot of sensory stimulation, and it was like bang, bang, bang and bang. Our customer wants new, and wants to continue her fashion conversation every season. It’s up to us to create the conversation. I’m feeling as optimistic as ever. ”

“It was a very upbeat and optimistic week,” said Roopal Patel, senior vice president and fashion director of Saks Fifth Avenue. “There was lots of joy, positivity and good vibes all around. There was a real welcoming feel to this fashion week. The events and presentations felt very special.”

“This was one of the strongest New York Fashion Weeks in a while,” said Beth Buccini, owner of Kirna Zabete. “You could feel there was new energy in Tom Ford’s takeover [as chairman of the Council of Fashion Designers of America], and it was great to see some European audience members back in the crowd.”

Kelly Golden, owner of Neapolitan, said, “New York had some freshness and newness that I haven’t seen in awhile. During these fast-paced times, where there’s too much product, too many designers, and too much information, clients are craving familiarity, stability and timelessness. It was refreshing to see designers who believe in their house codes and are doubling down on them, rather than trying to reinvent themselves as many designers have been doing to try to ramp up their businesses.”

A handful of designers were near-unanimous favorites. The group, no longer new nor emerging — yet not as established as designers such as Ralph Lauren or Michael Kors — included Khaite, Brandon Maxwell, Gabriela Hearst, Sies Marjan, Pyer Moss and Deveaux.

“Deveaux got us all going early Sunday morning with positivity and realness and a live musical  performance, and the clothes were shown on a diverse cast that danced and skipped happily,” said Fargo, also citing Adeam, Adam Lippes, Rosetta Getty, Nili Lotan and Brock.

“Khaite was really strong. It feels like it’s been around for a very long time,” said Lisa Aiken, fashion director of Moda Operandi. “When I look at the development of that collection, she’s [Catherine Holstein] really come a long way in a short time. It’s gotten a lot more feminine and has more design content. I also love Deveaux, which seems to have grown a lot. There was a lot of development there.” 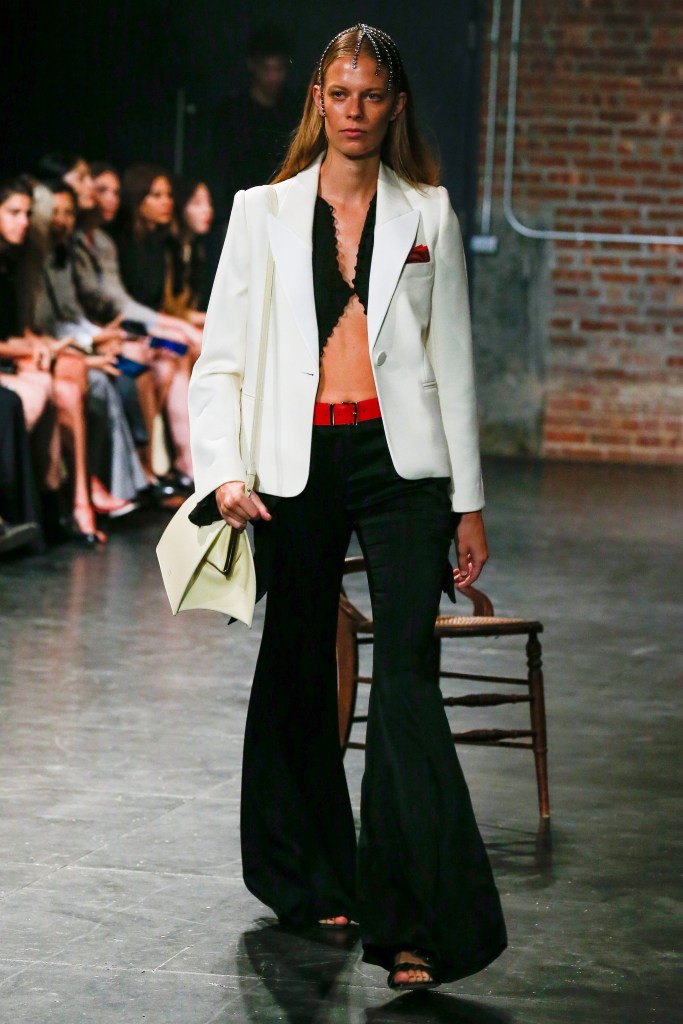 Moda Operandi’s online trunk shows, which allow consumers to pre-order from many New York collections, on Tuesday launched Brandon Maxwell. “Brandon has been on a roll, and consumers are very enthusiastic about preordering,” said Aiken. “We’re actually selling his short suits and the green two-piece look that Bella [Hadid] wore.

“These guys are really pushing themselves to take a bigger chunk of our open to buy,” Aiken said, referring to  Khaite, Maxwell and Devaux.

Showmanship was a theme of fashion week, with Lauren’s swanky Ralph’s Club, where Janelle Monáe crooned during the designer’s homage to Le Smoking, and Ford’s show in an abandoned New York City subway station.

The Zendaya x Tommy Hilfiger show at Harlem’s Apollo Theater “left everyone in such a great mood,” said Aiken.” It was that level of the experience. It had music, but so does every other show. There was something about the way it was put together and the casting and the joyfulness.”

For his show at the Brooklyn Navy Yard on Sept. 11, Kors found “the perfect way to address the obvious, with the Young People’s Chorus,” said Ken Downing, chief creative officer at Triple Five Group. “He did it in a very tasteful way, making it celebratory and making you proud to be an American. And the clothes were great.”

Consummate showman Marc Jacobs brought new meaning to the word diversity with his cast of eccentric characters. “He’s a mad and wonderful genius with his exuberant and eclectic fashion menagerie,” Fargo said. “We’re looking for more unexpected boundary-pushing fashion like Marc Jacobs and Proenza Schouler, with its forward edge, to move the needle even further on American fashion.”

Here’s what retailers had to say about the shows:

Favorite collections: Marc Jacobs struck the right note, it was all about individuality, and it was super-fab. The Row; Proenza Schouler. Brandon Maxwell was the epitome of American fashion with great styling, tailoring, colors and enthusiasm. He’s an optimistic designer and his essence was felt in the collection. This was one of Proenza’s best collections. The brand has a very specific DNA, and it’s been very true to it. Khaite is pretty simple and pretty clean, and it’s very modern. 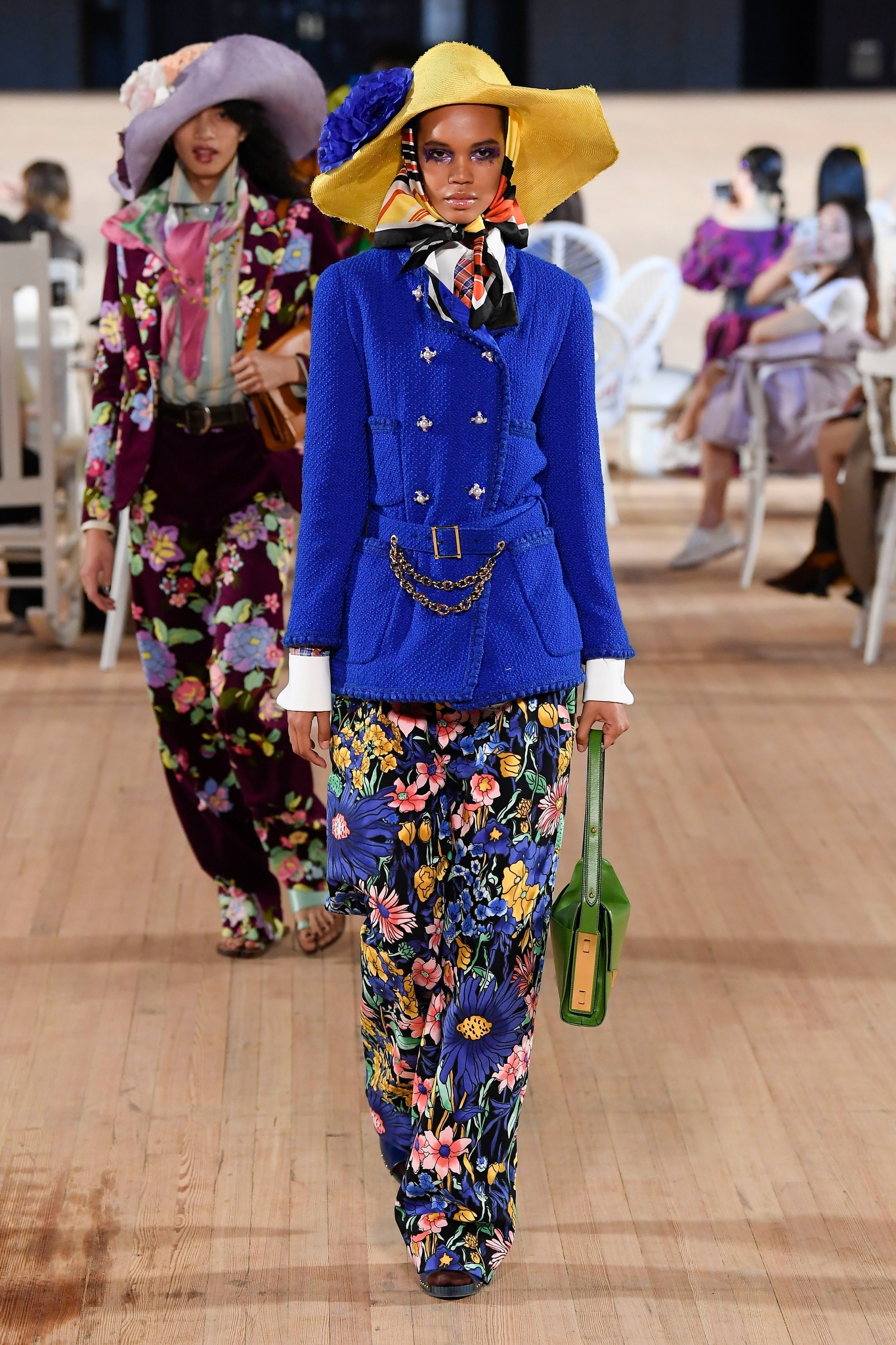 Trendspotting: Tailoring was super-strong. There seemed to be more color than ever, and color sells. Maybe the orange top doesn’t sell, but having the orange top on the floor creates the excitement that does ring the register. There were lots of strong shoulders, and shorts below the knee. My favorite trend for fall was the gaucho at Celine in Paris. There were lots of nods to that on the runway.

Must-have items: A peplum top, long shorts, and a great blazer, but I don’t like the super-exaggerated shoulders, and there’s been a lot of them on the runways.

Vikki Kavanagh, buying and merchandising director of The Outnet

Favorite collections: My favorite collections played to our smart, erudite and savvy customers looking for grown-up fashion: the clean, sleek lines and timeless pieces at Khaite, The Row and Gabriela Hearst were all beautiful. 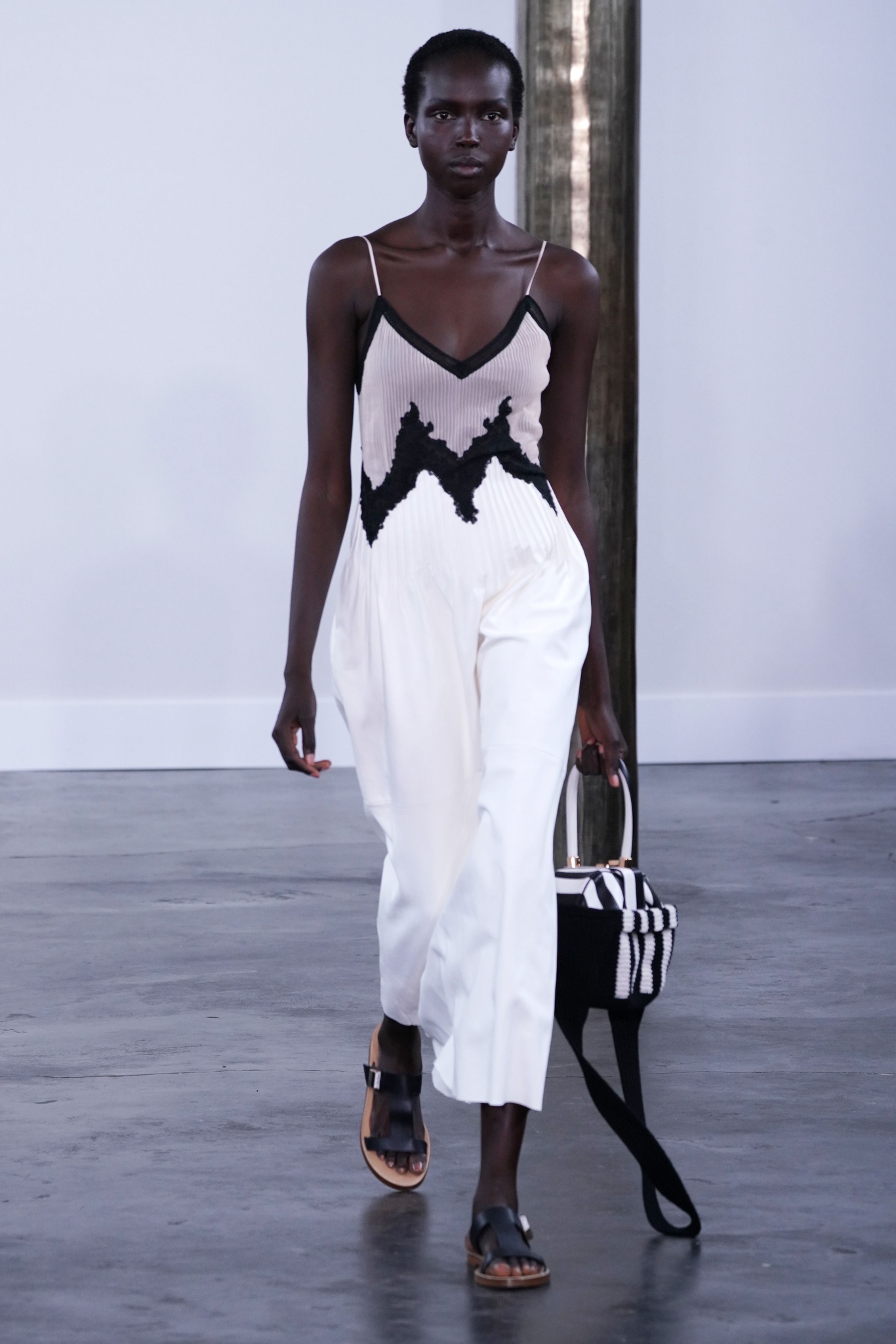 Talent scouting: Pyer Moss was the most hotly anticipated show, and it didn’t disappoint. It was a perfect example of a creative way to showcase your brand, rather than a traditional catwalk show. It allowed the brand to stand out and actually say something.

Must-have items: There’s been a shift away from ‘It’ bags and singular pieces to entire looks from your favorite brands, co-ords in color blocks, and whether it’s a blouse and skirt or trouser suit, matching and color-coordinating your look is the new key way to dress.

The Row, because I don’t think we can get enough luxury and elegance; Oscar de la Renta raised the bar with their dreamy collection; Wes Gordon at Carolina Herrera, taking the house DNA and moving them forward for a new customers; Marc always being the dreamer and bringing the fashion magic to life, and Ralph Lauren is bringing back overall glamour and decadence. Also, Gabriela Hearst, Khaite, Jason Wu, Brandon Maxwell, 3.1 Phillip Lim, Zimmerman, Rosie Asoulin and Jonathan Simkhai.

Alejandra Alonzo Rojas is a rising star and Deveaux’s idea of back to basics was effortless, and it was breathtaking to see they’re continue to shine.

Favorite collections: Zimmermann, Ulla Johnson and Jonathan Simkhai. They all had gorgeous color palettes, prints and lace and crochet details, and I admire how they continue to evolve while staying true to the feminine ethos of their respective brands.

Talent scouting: Acler is an Australian brand with a beautiful and bright palette and strong statement separates.

Say goodbye to: Animal prints have been so dominant for over a year, it was refreshing to see scarf and abstract prints emerge as strong trends.

Consumer mood: Customers love designers who stay true to their identity, but continue to evolve and offer newness.

Favorite collections: The Row, because of its confident and serene perfection; Proenza Schouler’s design bravado, which translates perfectly for its customer. The draped and pleated dresses embodied real power. Sies Marjan hit a clear, bold stride with strong color and a deft display of pleating for knockout dresses. 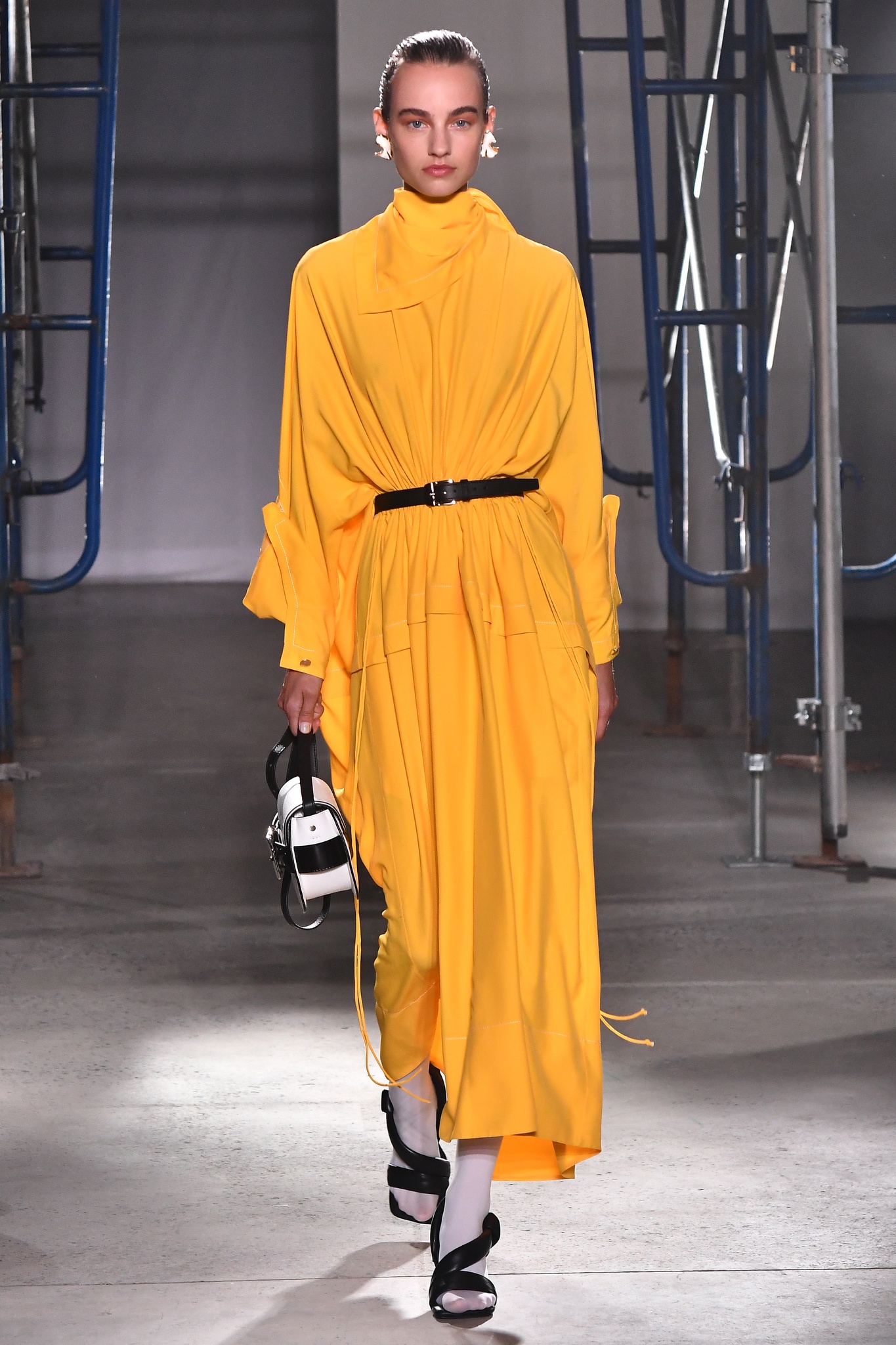 Talent scouting: Batsheva, from Batsheva Hay and Alexei Hay. It’s new to Barneys and has a singular point of view: a defiant cool.

Say goodbye to: At NYFW, dressing purely for street style photos is tired, and looks exhausting, especially for day.

Must-have item: The Velcro Teva-like sandal from The Row.

Customer mood: This week has been particularly strong in store. Customers have an appetite for newness, and they’re shopping.

Customer mood: Incredibly discerning and looking for that piece to fall in love with or taking an investment approach to collecting fashion.

Favorite collections: Khaite’s directional and inspiring and completely wearable clothes for a variety of women of different ages; Sies Marjan‘s Sander Lak’s sense of color — the best in the business — always inspires; Rosie Assoulin’s unique silhouettes; Proenza Schouler’s mix of tailoring and draping with a signature hardcore vibe, was more grown-up and sophisticated than usual, and Brock’s romantic, Victorian vision was fresh with covetable tops and jeans.

Trendspotting: The continuation of suiting, plaid, and shades of green and orange.

Say goodbye to: The dad sneaker. It was great to see the return to heels on and off the runway this season.

Customer mood: We’ve been celebrating Kirna Zabête’s 20-year anniversary, so the customer is upbeat and engaged. Foot traffic is high, and she is ready to shop for fall.

Favorite collections: Helmut Lang felt like a return to the early collections with a focus on tailoring and cropped jackets and the use of neon; Staud’s dresses and separates in bold saturated hues and whimsical fabrics with the newest must-have bags, and Marc Jacobs’ joyful and inspired show, which perfectly punctuated a week of color, energy and femininity.

Trendspotting: The new silhouette with exaggerated sleeves, mini dresses, short suits and Bermuda shorts, pastel colors, and the Nineties square toe in everything from boots to sandals.

Diversity on the runway: Prabal Gurung continues to lead the way in championing diversity, seen at his 10th anniversary show.

Linda Fargo, senior vice president of the fashion office and director of women’s fashion and store presentation at Bergdorf Goodman

Best fashion week moments: The Blondes’ phantasmic show on the set of Moulin Rouge. Michael Kors serenaded us with upbeat chorals of American centric positivity and an American-centric collection. Janelle Monáe crooned to us at Ralph Lauren’s swanky supper club for his homage to a Le Smoking collection and Tom Ford’s disruptive and edgy collection was shown in the bowels of the B line subway was a New York statement from our new CFDA president. 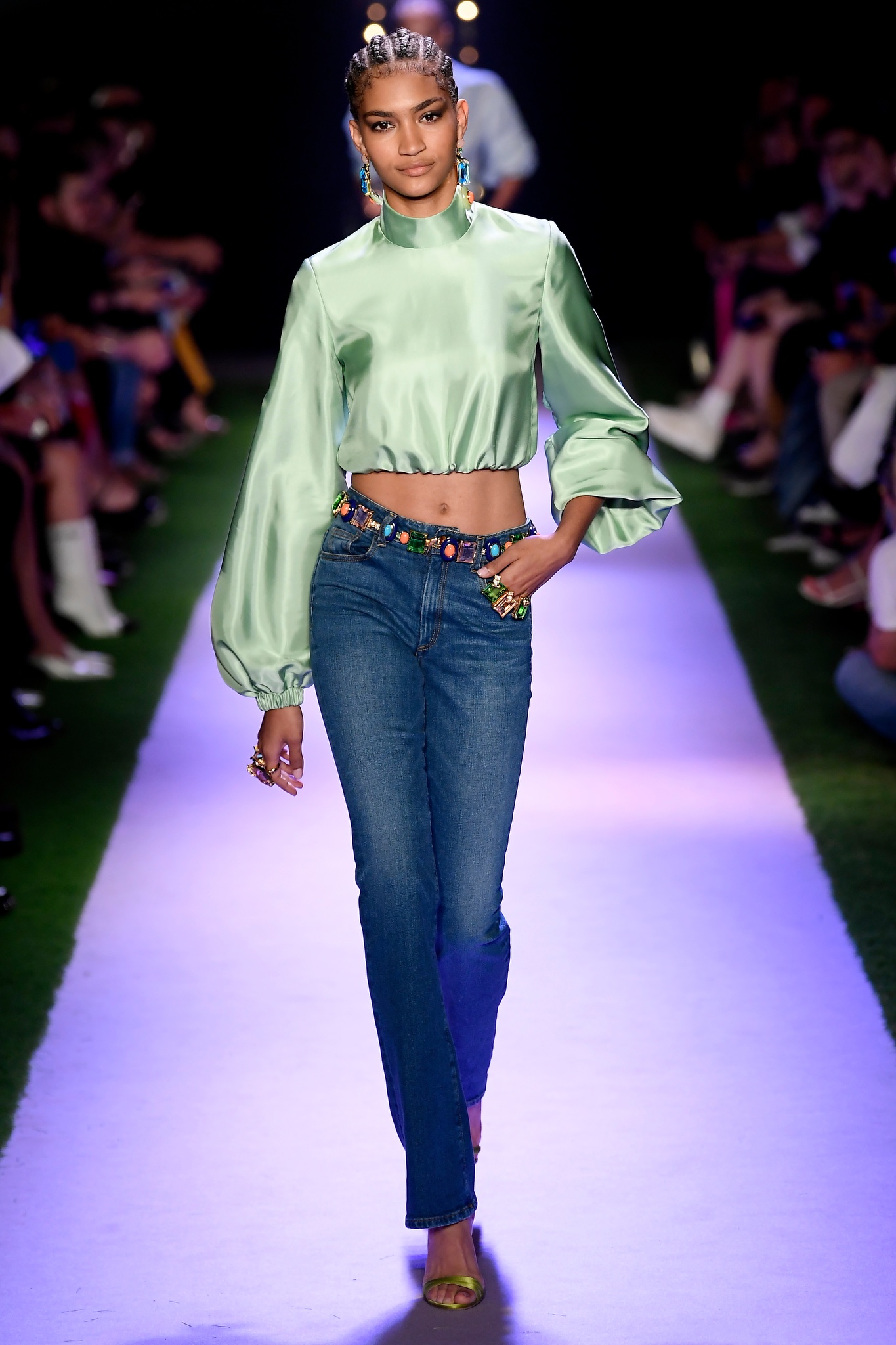 Say goodbye to: Hot pants are a trend that could go away and I’m super-bored of happy florals.

Trendspotting: Bold, bright prints in jewel tones such as orange, fuchsia and blue, as seen at Tom Ford, Carolina Herrera, and Zimmermann; shirting with exaggerated sleeve details from Zimmermann, 3.1 Phillip Lim, and Tory Burch; soft tailored suits in lightweight fabrics from The Row and Gabriela Hearst, and stark whites. 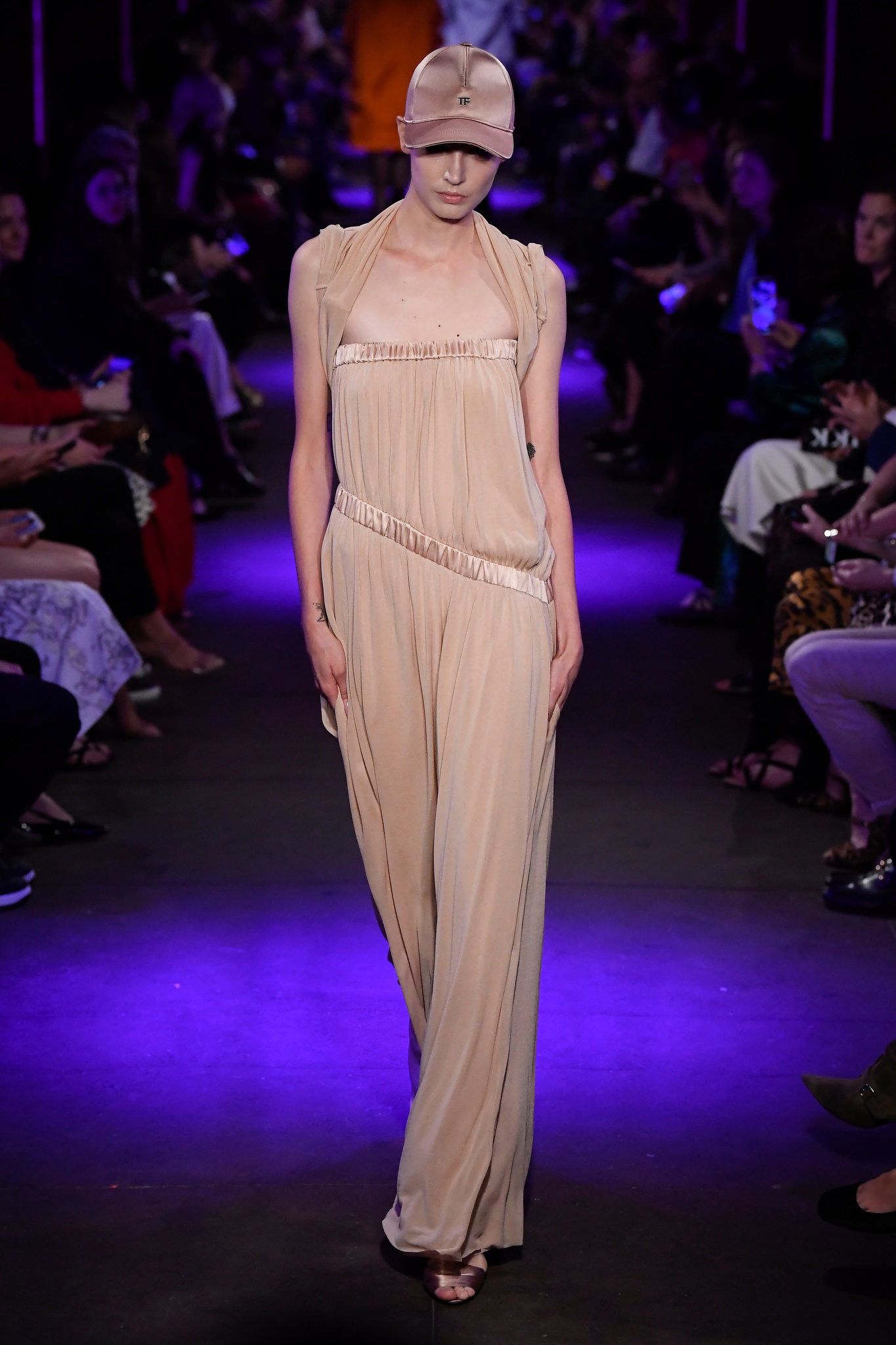