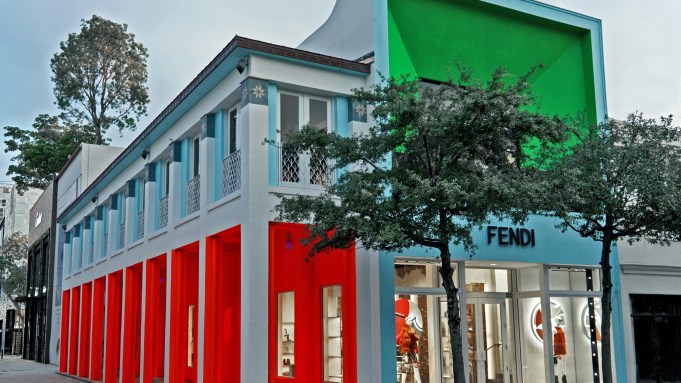 Pietro Beccari, chairman and chief executive officer of the Rome-based firm, underscored the brand’s and store’s links with design and art. To wit, the new 5,400-square-foot, two-story unit is decorated with leather couches in brown and navy, contrasting with a table and chair in poppy red, all by Fendi Casa, and walls show artworks by Maria Pergay, Thierry Lemaire and Marc Newson. A boutique in this area of town was a natural evolution. “We’ve had our Fendi Casa showroom in the Design District for 10 years, and here is where we sell our home collection the most,” Beccari told WWD. “There’s been a big retail development and we are happy to be a part of it. We are in a preeminent central area and in a historical building.”

Fendi and Grawunder were careful to respect the storied facade without damaging it, with a unique color-block effect. “Johanna is an expert with lights and she has her own special phosphorescent paint, which allowed her to amplify Miami’s colors, adding a pop touch to the store,” observed Beccari.

Inside, it looks like nothing else, it’s luxurious but connected to design. “The facade combines fluorescent blue and green with UV lighting and polished stainless steel. One side of the building is marked by a fluorescent orange hue, a colonnade and recessed LED lighting. Known for her public light installations, this is the second project for Fendi with Grawunder, after the “Un Art Autre” traveling exhibition in Asia.

Inside, exposed concrete and a bronze patina hark back to Rome and its architectural patrimony. Exposed brick walls and cement floors add a raw, industrial element juxtaposed to the opulence of textured design elements including sections of walls in gold stucco. Reminiscent of a spiked gold wall in Fendi’s Paris Avenue Montaigne boutique, a gold spiked plaster wall stands out in the women’s ready-to-wear area, displaying the brand’s Peekaboo or Baguette styles. White textured stucco walls and fluorescent blue stairs lead up to the second floor and the men’s collection.

Beccari said he was “very happy” with the performance of the brand in the U.S., trumpeting “still strong growth potential” in the region. In Florida, Fendi counts stores in Aventura and Bal Harbor, and Beccari underscored the increasingly strong real estate developments taking shape in the area. Florida is often seen as a bridge to reach Brazilians and Mexicans, whom the executive admitted are “very important,” but this can no longer be considered a South American hub as the range of nationalities is quickly expanding, he noted.

“Our Fendi Château Residences have just been completed and the 54 apartments are all sold out, and they cost between $8million and $25 million. Owners come from all over the world, ranging from Greeks, Mexicans and Taiwanese to Thai and Chinese,” Beccari said.