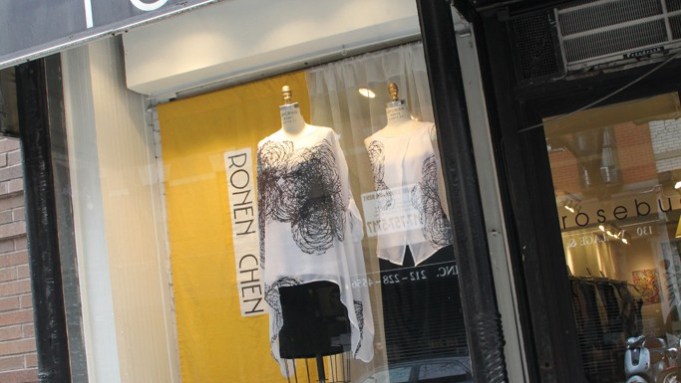 NEW YORK — If Fern Penn had her way, the fashion capitals of the world would be New York, London, Paris, Milan and Tel Aviv.

Israeli fashion is still developing and Penn has been tirelessly promoting it at Rosebud, her SoHo store here, for the last 10 years. The 1,000-square-foot Thompson Street shop now has a broad and diverse customer base that’s growing.

It wasn’t always this way. The recession was especially hard on independent retailers, Rosebud included. At the height of the downturn in 2009, Penn formed an organization, Shop Small Stores, with 60 other retailers, to encourage consumers to shop locally.

Rosebud sells apparel, jewelry, handbags, ceramics and glassware, which Penn finds in Tel Aviv and beyond. Over 7,000 clients have shopped at Rosebud, choosing from among the store’s 200-plus Israeli suppliers.

Customers find Rosebud through word of mouth or discover it by accident, like Whoopi Goldberg did when she walked down the street one day and saw Kedem Sasson’s collection in the window. Claire Danes walked into the store before Christmas — hugely pregnant with her son Cyrus, who was born later that month — she purchased stocking stuffers such as recycled picture frames and bracelets made at Yad LaKashish, a Jerusalem day center for elderly artisans.

With Rosebud marking a decade in business, Penn is talking expansion. She said she considered opening more stores but realized “my favorite stores are one-unit shops. I’m speaking to investors. I’d like to find a larger space with about 2,500 square feet.” Penn wants to showcase the work of Shenkar College of Engineering and Design students. “I also want to have a juice bar/café, like in Tel Aviv,” she said.

In addition to Kedem Sasson, Rosebud sells Dorin Frankfurt, the grand dame of Israeli fashion; the playful, comfortable clothing of Alembika, as well as the popular Ronen Chen, whose graphic, color-blocked pieces are priced between $80 and $360. “We do really well with him,” Penn said. “We’re the only store in New York City to carry the full collection.” There’s also Naomi Maaravi, who makes recycled fashion out of leather, suede, cotton and denim that have a distressed look.

Penn has started selling Israeli vintage apparel. She built the brightly colored collection of tunics and dresses over the last five years. There’s even a Gottex maxidress from the Sixties, priced at $220.
Vintage pottery and a wall of carved olive wood plaques, popular in the Sixties, give the store a retro feel.