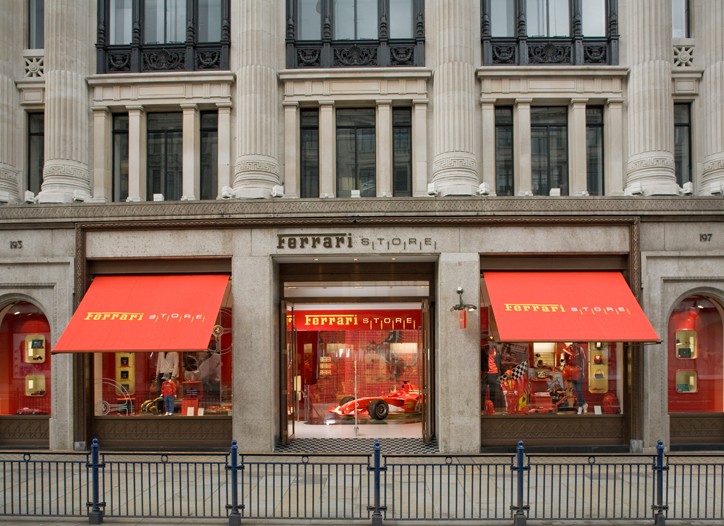 MARANELLO, Italy — The retail and product expansion of Ferrari, Italy’s fabled sports car brand, may be on a fast track with double-digit growth, but the finish line is still far away.

Propelled by retail sales of 1.8 billion euros, or $2.6 billion, on products ranging from sunglasses to skinny jeans, Ferrari is channeling resources into its namesake stores and licensing portfolio. There are plans to grow the store count from 30 to 50 by 2011, with a focus on the Far East.

In the U.S., Ferrari’s number-one market that accounts for 20 percent of its auto revenues, the brand will transform part of its 5,400-square-foot Park Avenue auto showroom into a store in the first half of next year.

“We decided on a very selective strategy in New York, which will become a destination point for owners and aspirational ones,” said Massimiliano Ferrari (no relation to the founding family), the firm’s licensing and retail manager. “The offering will be cooler and less touristy than the one in other venues.”

In addition, the first Ferrari theme park is to open in Abu Dhabi, United Arab Emirates, next year. Designed to offer a multisensory experience, the park covers more than 4.9 million square feet. It will house over 20 attractions, including what is billed as the world’s fastest roller coaster. The largest Ferrari store, at 10,800 square feet, opened in October in Dubai despite the emirate’s recent financial woes.

The first Ferrari shop launched seven years ago in the company’s hometown here, followed by 29 units in key locations such as Rome, London, San Francisco, Macau and Barcelona. With the exception of the unit here, all stores are licensed.

“For me, what sets Ferrari apart from other brands is that people start loving it when they’re kids, because don’t most children own a Ferrari car model?” Massimiliano Ferrari said.

In the first nine months of this year, Ferrari reported a 10 percent drop in sales to 1.3 billion euros, or $1.8 billion at current exchange. However, the brand increased its market share in all the countries where it sells.

The product assortment mirrors Ferrari’s split character, which is divided between high-net worth Ferrari clients and millions of Formula One racing fans worldwide. A yellow shield with a black horse logo identifies the more mass-driven merchandise, while the prancing horse characterizes the offerings on the higher end.

Seeking to differentiate itself from competitors, Formula One racing standards are applied to men’s wear — a concept exemplified by quilted motifs, UV-resistant materials, waterproof closures and vents on jackets resembling air grids.

A jewelry line licensed to Damiani will launch next year, and there are also chessboards, bikes, skis, crash helmets, ashtrays and desk sets forged from used car components.

“The blueprint was conceived to reproduce the Ferrari experience and to create a container masterminded to house the two worlds, both visually and soundwise,” Massimiliano Ferrari said.

The latest Formula One car greets customers on the threshold of the stores, where sensors set off a soundtrack that simulates the roar of its engine.

Warm lighting and red lacquered fixtures and Frau leather-covered shelves, aimed at retracing the exterior and interior of a car, highlight the more expensive products, tempered by a high-tech look of steel, black lacquer and a colder bluish illumination for the lower-price goods.

The heart of Ferrari is in its headquarters here, or “village” as chairman Luca di Montezemolo calls it, a 5.4 million-square-foot compound largely powered by solar panels. Red-clad workers bustle around while the roar of the Ferrari engines can be heard as new cars are tested before being shipped to their owners.

During his 18-year tenure, di Montezemolo ironed out the “Formula Uomo” project, based on the notion that the quality of the cars should mirror the quality of the environment in which they’re made. Employees and their families benefit from a number of services, including free medical and fitness checkups, first and second home loans at competitive rates and discounts on school and university textbooks.

The spaceship-looking wind tunnel was designed by Renzo Piano in 1997, while a string of contemporary architects, including Massimiliano Fuksas, Jean Nouvel and Marco Visconti, designed the various modern and aerodynamic pavilions, where natural light floods through glass walls and shallow stone pools bring a whiff of Zen to the setting.