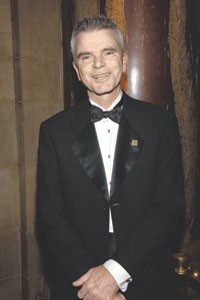 NEW YORK — Retail giants, recently inducted into the Retailing Hall of Fame, were honored at the institution’s second annual dinner Sunday at Cipriani on 42nd Street.

The event sheds light on an industry suffering from a talent drain because retail training programs have been disappearing and few learning institutions support retail studies.

“We are here to be inspired and [are] really here to discover the soul of retailing. It’s not just about performance,” said David M. Szymanski, founder of the Retailing Hall of Fame and director of the Center for Retailing Studies at Texas A&M University.

A portion of the proceeds from the dinner benefited the Retailing Leaders of Tomorrow Scholarship Fund. During the event, Talbots received a special award recognizing its scholarship fund donating $100,000 each year to women who enter college later in life, from their late 20s to early 60s.

Peter Sachse, president and chief marketing officer of Macy’s, addressing the crowd of 350, cited R.H. Macy’s innovative spirit and noted that Macy’s was the first retailer to have in-store Santas, a restaurant and a soap and perfume corner.

“Who here doesn’t relish the joy of merchandising?” asked Roberts. “It’s all about finding the right inventory, and getting it into the right channel at the right price … Above all, retail is the joy of associates. It is really teamwork at its best.”

“As retailers, we are trying to get customers’ heartbeats up. They either curse you or think kind things about you,” said Garrett Boone.